REVIEW: Uptown Players laces up to deliver a special kind of ‘Kinky’ 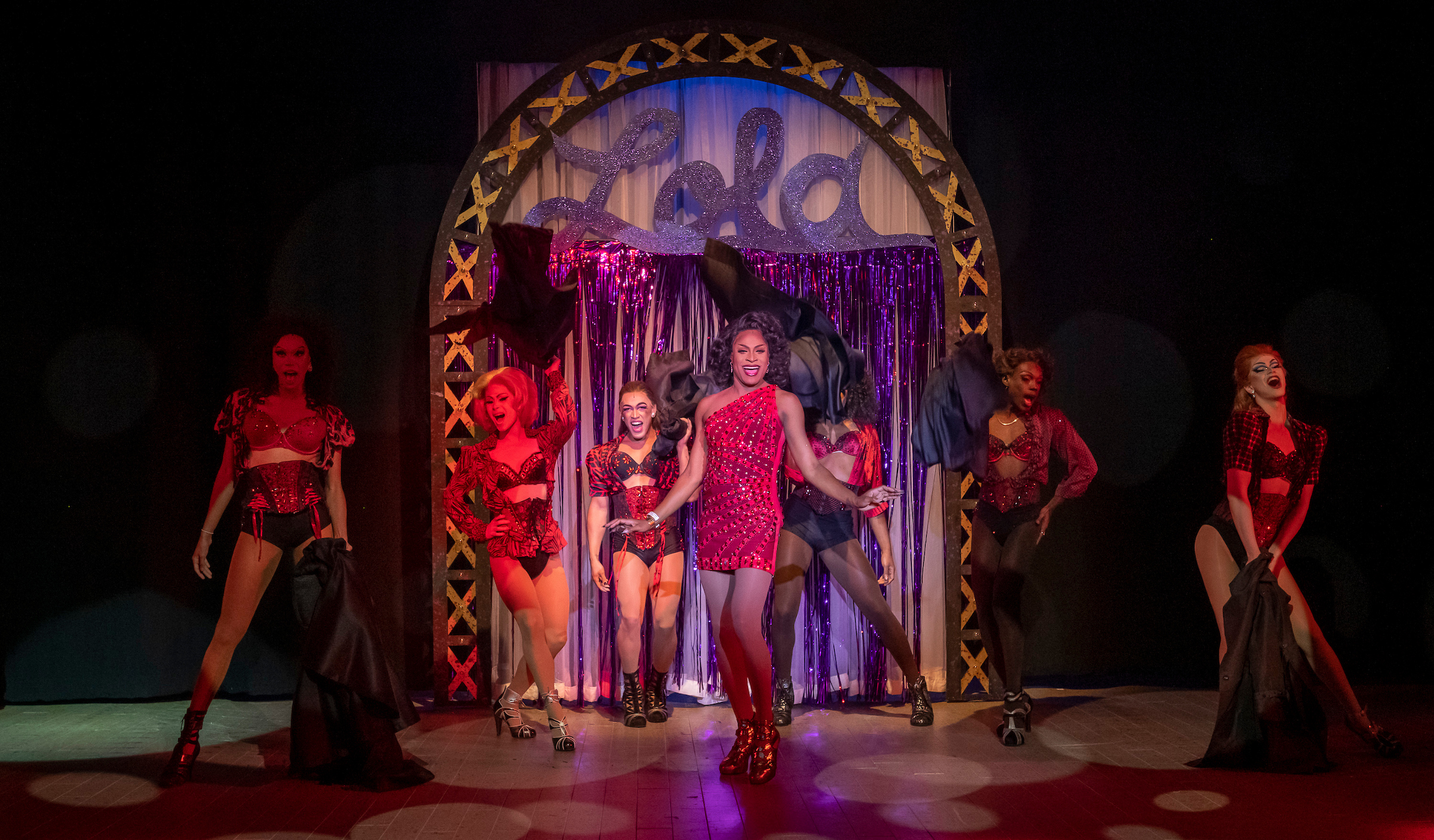 The people who need to see Kinky Boots will likely never see it. Those who protest libraries for drag queen storytime or those who enact laws against saying the word “gay” wouldn’t be caught dead in this dragapalooza of a musical which is a shame. Uptown Players, director John de los Santos and the talented cast created something transcendent and special.

With the book by Harvey Fierstein and music and lyrics by Cyndi Lauper, you could say much about Kinky Boots is a safe bet. The songs  by an iconic pop star are catchy and the story by a Broadway legend is quirky but compelling with enough balance of drama and humor. The musical numbers are flashy with costumes and choreography and belting vocals. All the elements of the show make for an easy audience-pleaser – but in the hands of de los Santos and his team, these Boots weren’t made for walking. These boots pranced, dah-ling.

Although it’s Lola’s world and every character in the show just lives in, the story centers on Charlie Price (Max J. Swarner) who inherits his father’s crumbling shoemaking factory Price and Son in Northampton and its devoted, but tired staff. As he reluctantly takes over the business, he searches for a way to keep it afloat. A chance encounter with the drag queen Lola (Lee Walter) finds that there is a niche market that’s far away from the boring loafers his company makes but can’t sell. Along the way, he’s navigating his demanding relationship with his ambitious girlfriend Nicola (Presley Duyck) who wants a bit more commitment from Charlie by moving to London and trying to plan a wedding. Factory worker Lauren (Rachel Nicole Poole) inspires Max with a new idea which sparks something between the two. Veteran employee George (Tony Martin) keeps Max on track while the roughneckish Don (Trey Tolleson) causes dismay with the new product and the new designer – Lola.

Lola was a role Walter was born to play and hardly for the reason that many know her also as local drag queen Jada Pinkett Fox. Walter didn’t just do drag onstage – far from it. She brought a fully-realized Lola with layers of complexity, confidence and pain. Plus, she knew how to stick the landing on all her entrances. Glammed for days with incredible costumes, Walter more than struck the necessary poses. Backed up by her drag team dancers The Angels, Walter dazzled with choreography and singing but then tapped deeply into more personal moments that Lola shares with Max or when Lola sees her father again. In short, Walter was on fire with this performance.

What could have been a thankless role simply because of Lola’s gravity, Swarner’s turn at Charlie was a knockout. Swarner gave Charlie undeniable charm without the saccharine. And when Swarner belted out his own numbers, he took the audience on the same journey his character was singing about. He rose up to meet the grandiosity of Walter’s character but didn’t try to compete with it.

As the heart of the show, Poole delivered an irresistible Lauren. Her chemistry with Swarner was on point while also serving a strong contrast to Duyck’s Nicola. To be slightly fair, Nicola is kinda justified being that she does get slighted by Charlie, but Puyck gave strong Type-A personality in Nicola. Tolleson hit all the marks as the single-minded, chauvinistic Don but unfolded the character nicely as he discovered his change of heart.

Of particular note was the ensemble. Many of them had their own moments but as a whole, it was equally entertaining to watch them as they watched The Angels dance or the boxing match between Don and Lola. Their full-on commitment was an added joy to see.

Whether it was today’s headlines about queer rights or just the enthusiasm onstage – or both – Kinky Boots offered something extra special. The show felt like de los Santos directed it with a big heart because its emotional aspects felt authentic, even in campy moments. Spoiler alert, the big flashy finale wasn’t just a high energy show closer, but also a declaration to “just be, who you wanna be” that felt like a reminder of bigger things with a satisfying flair.

Kinky Boots runs through July 31 at the Kalita Humphreys Theater.

In other Uptown Players news, the company’s capital campaign for its new building to house its rehearsal and storage space and box office has reached 80 percent of its $350,000 goal. A donor has also offered a $20,000 match donation. The capital campaign continues through Sept. 1. Uptown Players has also announced its new season of shows for 2022-23.