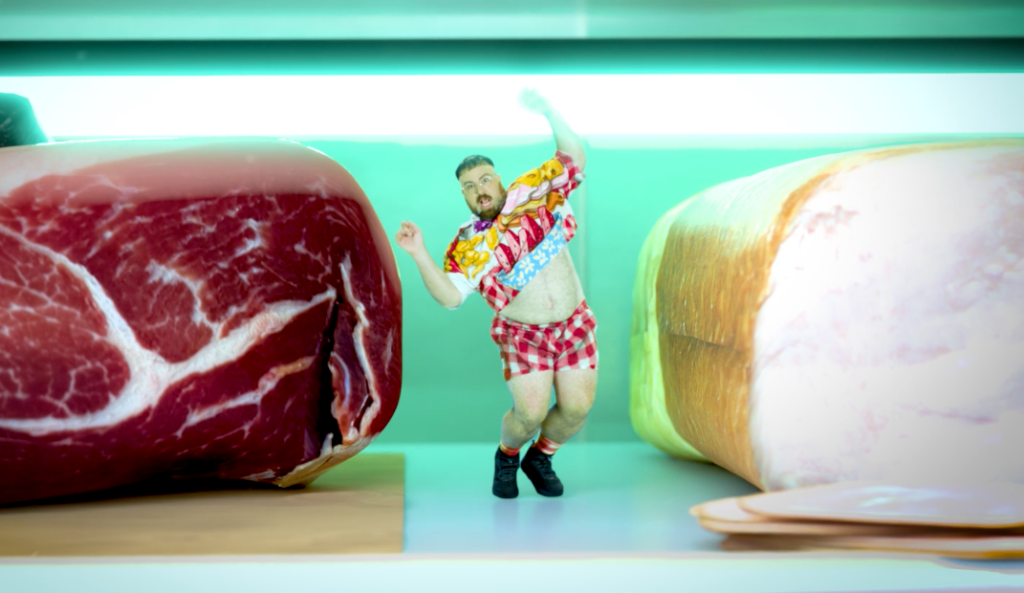 Inspired by the film Honey, I Shrunk the Kids (according to the press release), the queer artist released his new video Wednesday which features TT the Artist and Nicole Byer.

“Working with TT was so great because she is such a good writer, sounds amazing on any track she works on, and she was so down to play around with this wacky idea we had for the video,” Dipper said in the video announcement.

This is the first of three music video releases slated for Big Dipper for summer 2022, after his hiatus since his video for 2020’s “Back Up Off Me.”

The music video for is a fantasy world where Big Dipper, TT The Artist, and their dancers, shrink to miniature proportions and get jiggy in a grocery bag, a baseball mitt, and on a picnic table in the park all surrounded by giant food items.

Watch BD rap and dance through all the meats and cheeses:

Lucky Love’s shows off his “Masculinity”

We last heard from alt-pop singer Lucky Love during Pride with his single “Love.” Now he’s displaying another side with the new single “Masculinity” which he said in an interview with Twisted Male Mag that “it really portrays the statement I make in this song against toxic masculinity, it conveys something very powerful yet effusive.”

This is the first in a series of remixes starting with the Emotional Remix by Samaran.

The French singer described the song as “a middle finger to patriarchy and toxic masculinity. It gave me the opportunity to explore different aspects of masculinity.”

Check out the video below:

July 22: Show Me the Body at Cheapsteaks.

July 30: Bachelors of Broadway: Gentlemen of the Theater at Downtown Cowtown at the Isis.

Sept. 10: The Killers at Dickies Arena.

Sept. 28: Florence and the Machine at Toyota Music Factory.

Oct. 10: Carly Rae Jepsen at the South Side Ballroom.