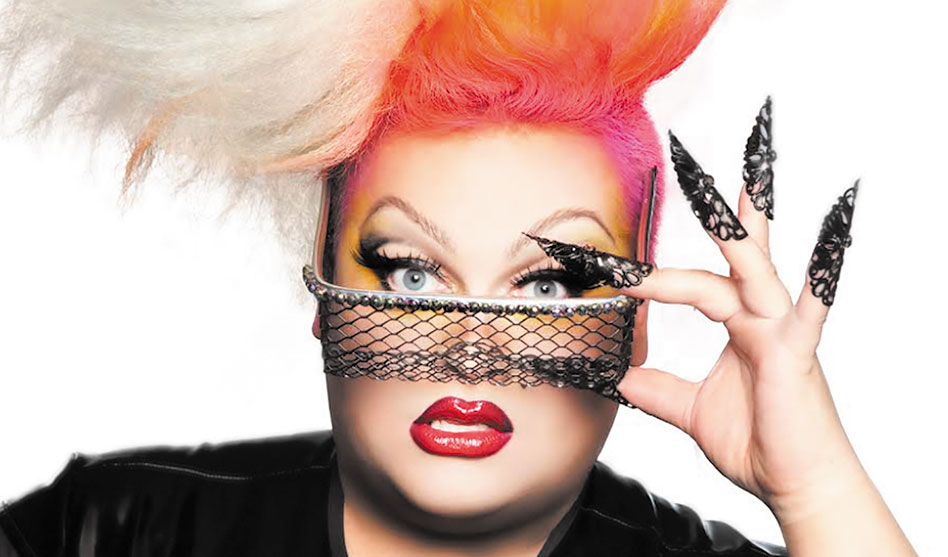 Getting ready to perform at TBRU 25, Ginger Minj talks about how drag opened doors for her in the entertainment industry

Joshua Allan Eads says he has been an actor and singer pretty much all his life. But it was his foray into drag and his drag alter ego Ginger Minj’s stint on Season 7 of RuPaul’s Drag Race and the second Drag Race All Stars that put him in the national spotlight — something that Ginger says has its advantages and its disadvantages.

Dallas Voice: I first heard about you through RuPaul’s Drag Race (and I wanted you to win from the start), so let’s get the obvious questions out of the way first. What was the best thing for you about being on Drag Race? And what about the drawbacks or disadvantages? Ginger Minj: You’re so sweet … and you have terrible taste! Haha! No one can deny the power of the Drag Race brand. It reaches people all around the world and connects with them on such a deep, emotional level. I’ve always been an artist who isn’t afraid to knock on doors until they open, but the platform Drag Race gave me has blown a lot of doors off their hinges! I’m being seen for projects that I never thought would be possible for me, and I’ve had a lot of incredible opportunities because of my time on the show.

It’s a double-edged sword, though. Sometimes producers and casting directors don’t see us as “real” actors/singers/artists, because drag is new and niche to them. I’ve been an actor and singer my entire life, whereas I’ve only been doing drag for 15 years. A lot of us have incredible professional skills outside of drag, and it can be an uphill battle trying to get the people in power to recognize that. But I’ve never been one to shy away from a battle!

Everybody always talks about how they were “edited to be…” a villain, a crybaby, a bitch… whatever. Do you think that fans watching Drag Race are seeing the queens as they really are, their “true personalities,” or does the editing make them come across as something else? What about you, personally? Did the editors treat you fairly? Everything I said on the show, I said in real life. I don’t think I was treated or portrayed unfairly, but they’ve got to cram two or three days into 43 minutes, so they pick the most dynamic moments and tell the story from there. There are moments I wish they would have been able to give a little more context or backstory to, but that’s not always possible. It’s a high stress environment, a pressure cooker, and sometimes we crack! I own every moment for what it came across as, because I understand every moment for what it really was.

Do you have any advice for drag queens who want to be on Drag Race? What about advice in general for those who want to make a career out of drag? I always tell my drag kids that drag is what you make of it. If you put in the work, the work will always be there. If you want one moment of glory, more power to you! But if you want a long-lasting career, chase every opportunity, give 110 percent and treat people how you want to be treated!

I have to admit that I did not realize what an outstanding singer you are. I just watched the video of you singing for Harvey Fierstein, and I was blown away by your performance. Do you prefer to sing live or do stand-up comedy? Since you are a “real” singer, is it weird for you to have to lip sync? Thank you so much for that! Singing “I Am What I Am” for Harvey Fierstein was a life-changing event for me. It’s the moment I’m most proud of in my entire career. It felt important and genuine, and I’m forever grateful to Logo and RuPaul’s Drag Race for giving me that opportunity.

Art is art, and drag should always be fun! I’ve been a performer my entire life. I was the epitome of a “theater geek” growing up, and I got into drag because I wanted to play the iconic women of musical theatre! The girls always had the best songs, the best roles and the best costumes! Treat every day like “all the world’s a stage,” and you’ll find the fun in anything!

What does the aspect of drag bring to your performance as a singer and as a comedian? Do you think being known for drag opens doors for you as a singer and a comedian/actor? Or is the drag something you think you have to “overcome” to be taken seriously as a singer/comedian/actor? As I said, sometimes it’s hard to be seen as anything other than a “Drag Queen.” People aren’t stupid; they’re just uneducated, and it’s up to us to help them learn! Drag is hugely popular right now, and people are trying to shove it into all forms of entertainment but usually as a quick gag for shock value or cheap laughs. Once they get to work with us and see that we have more to offer, it usually blows their minds and makes them realize what an asset we can really be to them.

My role in Dumplin started as a two-line, one-day gig, but once the writer and director got a sense of what I could do, they expanded my role and gave it more depth. We just have to keep working hard to prove ourselves!

I know you are from Florida, and when I watched the video of Michelle Visage performing your wedding at Drag Con, she mentioned the effect that the Pulse shooting had on you. Can you tell me a little about that? How did it affect you or change you? Those were my friends and my family, even the ones I didn’t know, in a place that was like home to all of us. Pulse was one of the first clubs in the area to give me a chance when I was starting out. [It was] owned and run by good people who always put our community first. It was devastating that someone could come into OUR house and hurt OUR family, and there was nothing WE could do about it.

It hurt then and it still hurts now. But I have to say that the way our community has come together to fight back is incredibly inspiring. I love Orlando, and I’ll never leave it, because everything here is such a part of me.

Going all the way back to the early days of “the modern gay rights movement” — Stonewall — the drag queens and the trans women have always been at the forefront of the movement in one way or another, whether they were throwing bricks at corrupt cops in Greenwich Village, or getting up on every stage possible to raise money for HIV/AIDS organizations. And yet, for a long time — and still to some degree — the “business gays” and the activist types have tended to look at drag as “embarrassing” or “stereotypical.” Do you think that is changing now? If so, why? I think it’s changing in the sense that we are everywhere now: clubs, TVs, movies, libraries, etc., and more of mainstream America is seeing that what we do isn’t something that needs to be feared or looked down on. We want the same things that everybody wants: love, respect and the right to be happy. Our community has fought so hard for so long to make the world a better, happier place for EVERYONE, because it’s something we want to share in ourselves. I’ve seen some very closed-minded people change their opinions when their hate is met with love and understanding.

I have always thought of drag as being something of a radical act, a special kind of activism. What do you think of the concept of drag as activism or a social movement? Do you think of yourself just as a performer, an entertainer, or do you consider yourself to be an activist, too? I think anyone who is different but refuses to be ashamed of that fact is an activist! If you stand up and refuse to be shamed for not fitting “the mold,” you are an activist. If you fight with whatever power you’re given to make the world a better, more understanding place for the next generation, you are my hero.

Tell me about what you are doing now — besides coming to Dallas for TBRU, I mean. A new show? New music? Maybe something altogether new? There’s so much cooking in this kitchen! TV, movies and a new album are all in the near future, and I recently started a new live theatre series in Orlando called TVLand Live! with my husband, CJ, and my best friend, Gidget Galore, where we take classic television shows and celebrate them from our own unique perspective. It has surpassed our wildest expectations with our productions of Golden Gals and Rozeanne, and the rest of the series is already getting great buzz! It’s always nice when something that you’re passionate about catches on with the community you love so much!

What do you want to talk about that I haven’t asked about? What do you want your fans to know? Follow me on social media! If you see me out and about, come talk to me! I love you guys from the bottom of my foam-padded heart, and getting to know all of you has been the best part of this entire experience.