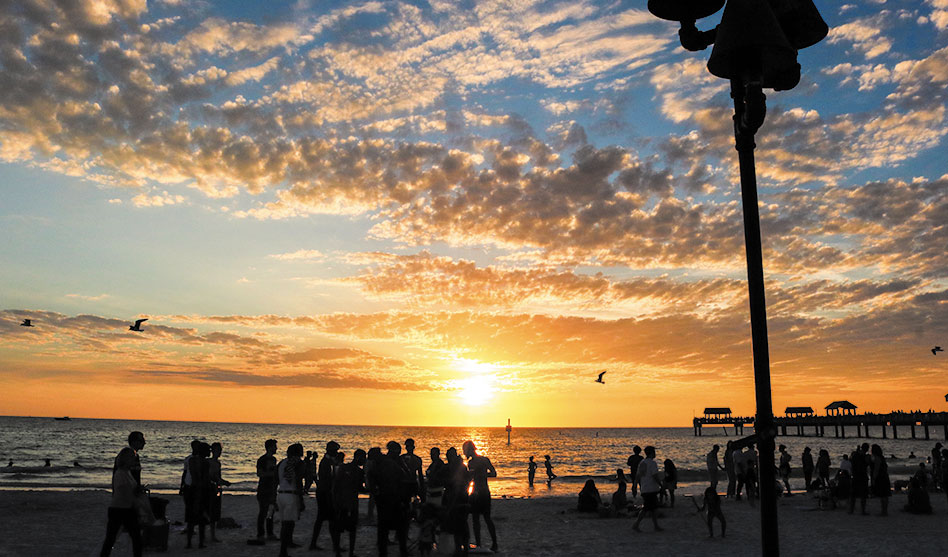 The sunsets on Clearwater Beach are breathtaking.

Florida. The name of the state conjures a host of images, from wild presidential elections to rocket launches and stories about, well, “Floridians.” When you think about the state as destination, however, chances are you think of three draws: The funkiness of Key West, the spectacle of Fort Lauderdale/Wilton Manors/Miami or the campy second-childhood playground of Orlando.

But Florida’s forgotten coast — along the Gulf of Mexico and Tampa Bay, straddling the Intracoastal Waterway — is not only fun and affordable but also welcoming to gay travelers, with draws from exquisite beaches to lively festivals and a happening social scene.

Whether you center yourself in Clearwater or Sarasota 60 miles to the south, there’s an adventure to be had… albeit without the noise and pace of Miami or raucous families of Disney.

Going Clearwater
An unexpected gem of the central coast, Clearwater sits on the oceanside of a peninsula across from Tampa, its closest major airport. Perhaps best known as the base of the Church of Scientology (Tom Cruise and John Travolta have places here; Hulk Hogan and Mario Andretti also call it home), the town is more centered on its beaches and boardwalk, which are vibrant yet convenient and manageable. 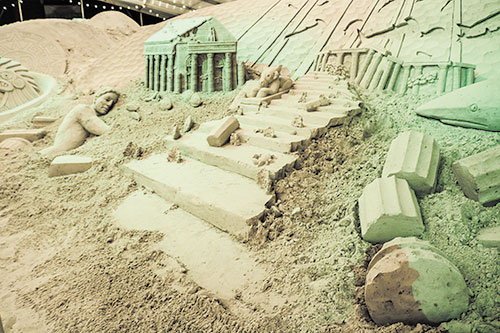 Although the town spreads the width of the peninsula, its entertainment district for visitors revolves around the narrow archipelago of barrier islands upon which is situated Clearwater Beach (divided into north and south neighborhoods).

Not a wild spring break kind of town like that other Floridian South Beach’ Clearwater’s version is actually a little lower-key than its North Beach, which has more shopping and clubs and is a marginally closer walk to Pier 60, the pedestrian walkway into the Gulf that’s a focal point of seaside social activity. 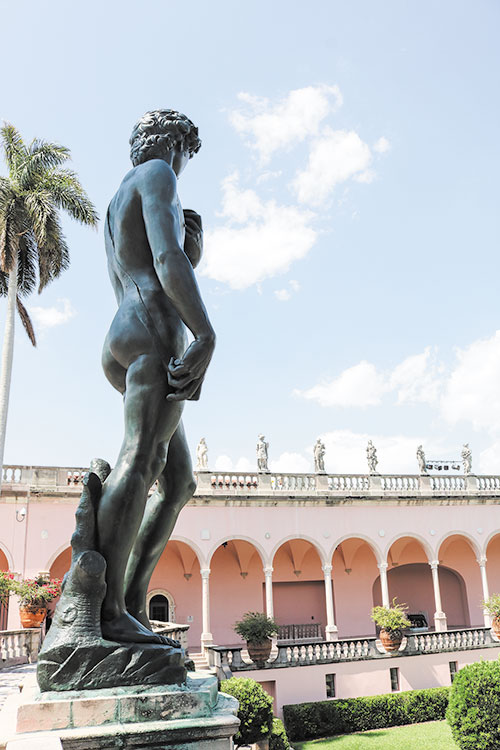 A full-sized reproduction of Michelangelo’s ‘David,’ is one of the amazing pieces of artwork at Sarasota’s Ringling Museum

You’d be hard pressed to find a more appealing coastline in the continental U.S. From astonisting sunrises to breathtaking sunset vistas, the climate ranges from brisk to sultry with few extremes in between. The beaches are covered in fluffy, soft, white powder that is never too hot to walk on barefooted, even in the swelter of summer. Called “sugar sand,” the city performs daily grooming that keeps it looking pristine. For the past seven years, they have even put on the Sugar Sand Festival, where a dozen-plus artists from all over the world — from St. Petersburg, Fla. to St. Petersburg, Russia — gather to build their artwork out of sand… and not just castles: The Great Pyramid, the Parthenon, the Statue of Liberty and more, have been spectacularly etched out of silica and water, the ultimate sustainable pop-up art exhibition, enthusiastically curated by founder Lisa Chandler. (Even when the festival isn’t taking place, you can rent a beachside cabana and people watch, tan or just vegetate.)

You can chill even more if you head out to Sandy Key, just a five-minute drive over the causeway, a relaxing perspective. The beach is just as soft and beautiful, but there’s more (and cheaper) available parking. The Marriott here, recently renovated, has spacious rooms and a staid but elegant vibe. Sandy Key is also the closest place where you can eat at Columbia Restaurant, a Sunshine State staple of Cuban-Spanish cuisine that originated in Ybor City in 1905. This old school eatery has the kind of menu where every recipe has a personal history, including its classic chopped salad, empanadas, “original” Cubano and a mango rum drink that was simply heavenly.

Beaches, of course, mean seafood, and seafood means fishing boats. For a brisk and exciting coastal adventure, I recommend a half-day fishing trip, which we took aboard the Super Queen (it costs about $70). The excursion is about a five-hour commitment (7:30 a.m. to a little past noon, so you still have plenty of daylight left afterwards) with about two hours of deep-sea line fishing, but chances are you will successfully land a few fish. (Depending on the time of year, expect to catch anything from white grunts to red snapper and the Gulf signature seafood, grouper.) You can throw your catch back, or donate the caught fish to others on the boat who weren’t as lucky, or you can do what I did: Eat ‘em. The boat crew will clean them and hand you over the fillets, and several local restaurants offer a catch-and-cook service. I took mine to Cooters, a friendly sports bar that will turn your catch into a deep-fried po’ boy sandwich with slaw and pickle spear for under $8. (Pro tip: You might wanna wear old or disposable clothes, and bring a towel and wet wipes, to minimize smelling of fish when you get back to your hotel.)

The boat ride out to the fishing spot has the added advantage of being a sightseeing tour where you might catch a glimpse of dolphins or manatees, which are fairly common. But if you don’t like fishing, you can instead book a dolphin tour or a sunset party boat, where you can take in the aquatic fauna and vistas while getting tipsy and possibly enjoying a buffet. The marina, like the pier, is a popular place to simply explore on foot (it’s easy to walk between North and South Beach, wherever you stay.)

If you’re even more committed to experiencing the sea life of the Gulf Coast, check out the Clearwater Marine Aquarium. Less an aquatic zoo than an animal hospital and rehab center, you can assist trainers in feeding some of the bottlenose porpoises, pet stingrays as they glide underneath your fingers and even see a large nurse shark swim peacefully alongside other fish. 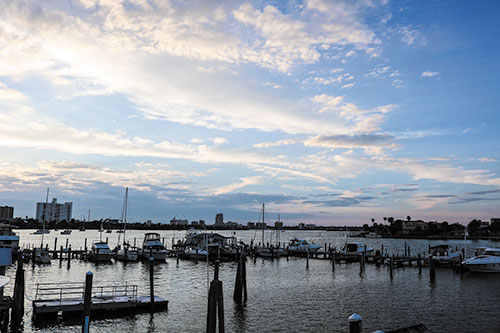 Daybreak is brisk and beautiful over the marina in Clearwater.

Options for accommodations are plentiful. The Edge Hotel boasts a glass-sided pool on the sixth floor overlooking the Gulf. Next door is the high-end Shepherd Hotel, or splurge on the impressive Opal Sands Resort. The Sandpearl Resort is home to a wonderful fine-dining restaurant, Coretta by the Sea, which even offers a totally affordable $59 prix fixe four-course menu.

You can dine at sea level at the Island Way Grill near the aquarium, get lunch or dinner at Bob Heilman’s Beachcomber, or just pop in to Blackfins for a craft beer and fresh fish tacos.

South to Sarasota
About equidistant south of Tampa (but with its own airport) is Sarasota, but the two cities are divided by more than an hour’s drive. About half the population of Clearwater and located inside the Intracoastal Waterway, Sarasota projects a lazier, cooler atmosphere as a hub for sightseeing and exploring, but also offers more gay-specific attractions and activities.

The so-called gay beach, North Lido, is a bit of a hike from downtown but worth an Uber ride. In addition to spacious beaches and people-watching, there’s a concession and picnic area for grabbing a quick nosh between sunbathing sessions, and the beach is right on the edge of tony St. Armand’s Circle, a lovely community with several dining options (including a branch of Columbia). For nightlife, you need to go further inland toward Gulf Gate Estates, where you can find the fun dick-dancer and drag bar Oasis, a hoppin’ hang that’s both divey and dance-y.

Even though he did not have a direct connection to Sarasota, the Harvey Milk Festival celebrates the gay pioneer with art, music and more. Now in its 11th year, the three-day event each May includes an outdoor music and crafts festival, a dance, an art exhibit and community lectures and educational experiences, that coincides with the Sarasota Film Festival. (Sarasota’s official gay Pride celebration takes place in October.) 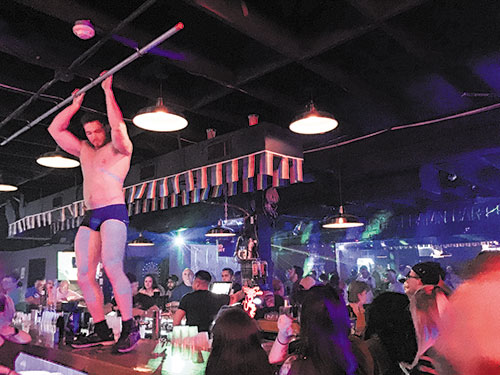 Sarasota is also home to the Ringling Museum, one of the largest and most astonishing fine-art museums in the American South. Founded by circus magnate John Ringling, it not only has the foremost collection of big-top memorabilia and historical artifacts but also masterworks of European art (including a full-scale reproduction of Michelangelo’s David) and palatial grounds that you could wander for days without getting bored.

All that wandering will require body fuel, of course. If you’re there on the weekend, don’t miss the Farmer’s Market for sampling tons of local products, from produce to honey. Other dining options run the gamut, from the open-air casual appeal of The Overton (good coffees, sandwiches, even spaghetti and meatballs) for lunch to the hipster-chic locavore hang Boca (bloodys, frittatas flatbreads and succulent burgers) for brunch to the exquisite chef-driven dining of Melange, where craft cocktails occupy space alongside rabbit tacos, escargot-stuffed mushrooms and pear salad for dinner.

The Harvey Milk Festival takes place May 7–9 in Sarasota. HarveyMilkFestival.org.

For a more extensive gallery of the Florida coast, visit DallasVoice.com