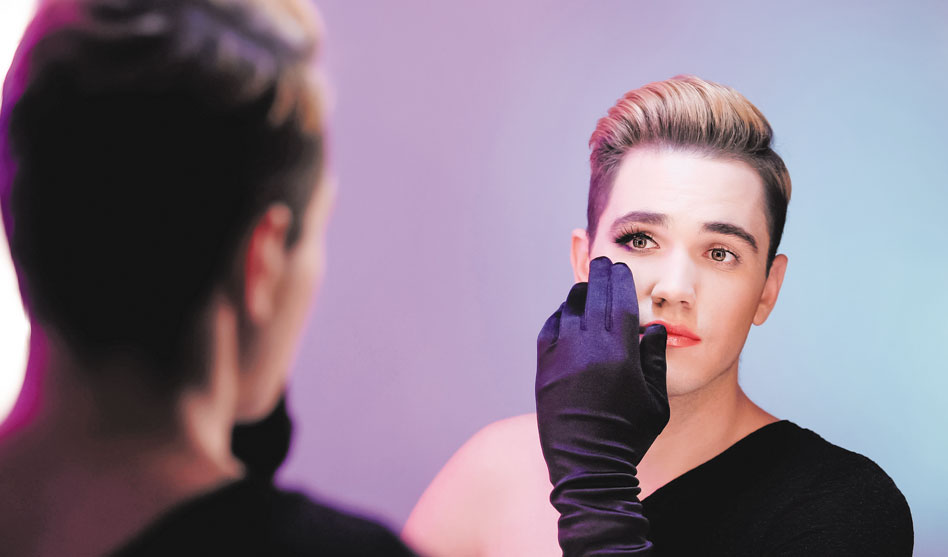 Like most LGBTQ people that graduated in the ’90s, I wasn’t out in high school. I had never heard the term “transgender,” and outside of many hateful jokes about men in dresses or trans people “tricking” straight men into some romantic encounter (I’m looking at you, Ace Ventura), we were absent in media, especially most teen shows.

I was confused in high school, trying different clothing styles and friend groups to figure out where I fit in. My suburban Oklahoma school had your typical assortment of athletes, goth kids, popular people, and of course, band nerds (my people).

I was also frequently angry and confused — struggling with anxiety, undiagnosed ADHD and gender/sexual orientation-related depression. And, all too often, I regrettably took that out on the few friends I did have. I look back at the bad fashion choices I made, and I’m sure they violated my school’s dress code at least a few times.

High school can be hard, and often we carry those insecurities with us into adulthood. Pre-COVID, I actually avoided my 20th high school reunion because another trans woman from my class, who is drop-dead, model-level gorgeous, was going to be there. Now, during COVID, I regret that I missed my chance to reconnect with some old friends.

That’s why this generation of kids and teenagers impresses me so much. So many more of them are out and honest about who they are. As adults, it’s our job to ensure this young generation of LGBTQ students are safe, protected and supported in a way that we weren’t in the 20th century. They shouldn’t have to bear the discrimination that so many report facing, especially in a place they’re required to attend.

As my tween daughter often reminds me, kids don’t have much control over their lives. Adults control where they live, what they wear, what they eat and, ultimately, where they go to school. A little individual expression in a place they are forced to spend 7-8 hours a day isn’t a bad thing.

And yes, teachers, administrators, and other staff have the difficult jobs of managing classrooms full of kids undergoing continual emotional and physiological changes, all while teaching subjects that students may or may not care about. As a teacher myself, I’m sympathetic to that.

But we adults chose these professions. We get paid — in the case of K-12 teachers, grossly underpaid — to be there. Students are there by law. We need to be sensitive to this power imbalance when looking at these issues. And we should be careful comparing workplace rules about proper dress with school policies.

So much of queer culture is centered around gender expression and identity. It is present in everyday labels like “femme,” “butch” and “gender-fluid” or “gender-nonconforming.” There are memes, pins, flags and emojis that we can use to express ourselves. You also see it in the larger media landscape with shows like POSE, Queer Eye and RuPaul’s Drag Race. Rather than conforming to traditional heterosexual cultural rules, more LGBTQ people want to express themselves in the ways in which they feel most comfortable.

A specific gender presentation can lead to greater self esteem and confidence. But for many Texas LGBTQ students, schools are a place where that expression is stifled by discriminatory policies. My article on student dress codes (see elsewhere in this issue of Dallas Voice) started as two random thoughts. The first was related to the attention Trevor Wilkinson received over his nail polish. The second was a bored dive into the origins of the myth of wearing an earring in your left ear to show that you’re gay. I still haven’t found out where the myth started, but I’m going to keep searching.

Initially, I meant to just write a story on dress code policies and the law. I reached out to hear from parents and students because, halfway through scouring school websites, I realized that written policies only tell part of the story. I know that the most significant interactions in a school day between authority figures and students are guided by subjectivity, reactions to situations and things that aren’t written down.

My hope is to expand on this research in the future, but for now, if you want to use it, please reach out to me.

Aubree Calvin (aubreecalvin@gmail.com) is an assistant professor of government at Tarrant County College and the co-host of the new podcast, Southern Queeries.