What becomes a legend most? 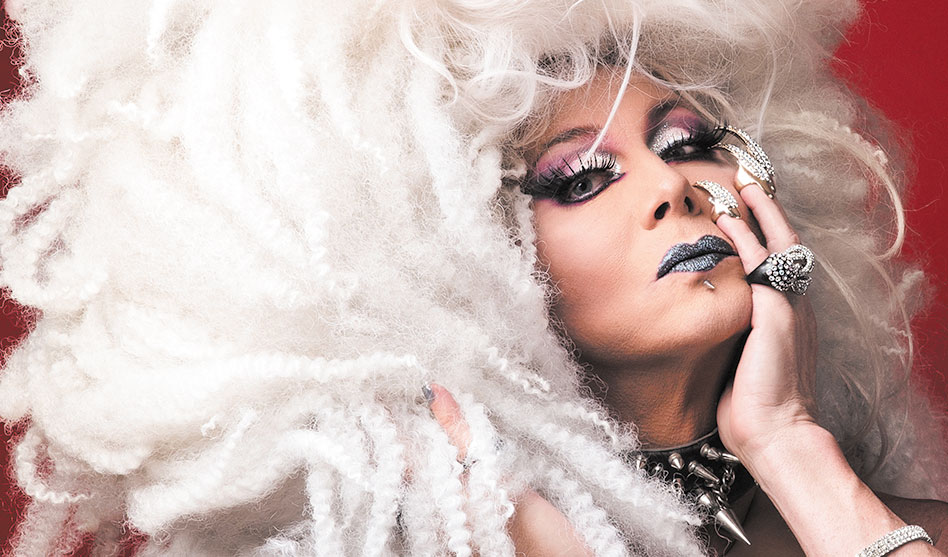 I am a huge fan of drag — drag queens, drag kings, all kinds of drag. It is a fascination that goes back nearly 40 years, back to the first time I walked into Joe Elliott’s bar, The Landing — down off Cedar Springs Road on Pearl Street — and saw my very first drag show.

What a cast that was: The Lady Shawn, Diva Sanchez, Kandy Delight, those cute backup dancers and, of course, Tasha Kohl.

One particular number that I remember all these many years later, Tasha came out onto the stage in a long, frilly gown worthy of Tammy Wynette or Loretta Lynn at the CMAs, with five or six blonde wigs’ worth of hair piled atop her head in a ’do that would have done Dolly proud. She strutted around the stage, “singing” Donna Fargo’s country hit, “You Can’t Be a Beacon If Your Light Don’t Shine.” As a fan of all the country divas, including Donna Fargo, I was delighted.

And then came the coup de grace: The chorus started — “You can’t be a beacon if your light don’t shine” — and all of a sudden, a myriad of tiny, colorful Christmas lights woven throughout that mountain of hair begin to blink on and off.

The crowd, as they say, went wild. And I became a Tasha Kohl fan for life.

I recalled that memory recently for Kohl Faulkner — Tasha’s “boy name,” and he laughed, “Oh my god. That was back when I had to plug into an outlet backstage and then drag that extension cord all over the stage while I performed!”

When all was said and done, The Landing didn’t last too very long. But Tasha Kohl, who’s star was very much still rising back in those days, is still around — and not just still going strong, but going stronger than ever.

On Sunday, Feb. 23, Tasha Kohl brings her Icon show to The Rose Room inside S4.

Getting started
It was, Kohl notes, “never my intention to be a female impersonator.” But once he tried it, he was hooked.

Kohl was a theater major in college when he was first introduced to the world of drag. A female friend — who he didn’t know at first was a lesbian — invited him to go with her to a drag show in Fort Worth. “I said, ‘But I’m not gay,’ and she said, ‘Oh yes, you are.” So he went, and “I was mesmerized by it. It was just so amazing!” Kohl said.

Eventually, his friend suggested he do drag himself, and after a bit of convincing, he agreed. And one night, on amateur night at Aub’s Mexican Food Restaurant, Steakhouse, Disco and Show Bar, a career in drag was born.

Yes, that really was the name of the place. It was in Fort Worth, about three or four blocks south of what later became the 651 (and then the Rainbow Lounge) on South Jennings Street, and “It was a dive,” Kohl said. Entertainers dressed in the kitchen then walked across the restaurant to where they had cleared out a corner and put down black-and-white tiles to create a “stage” where they performed. There was no DJ, he said, so “the girls would put 25 cents in the jukebox and perform to whatever songs they had.”

Kohl, barely out of his teens, was, “the original toddler in tiaras,” he said. 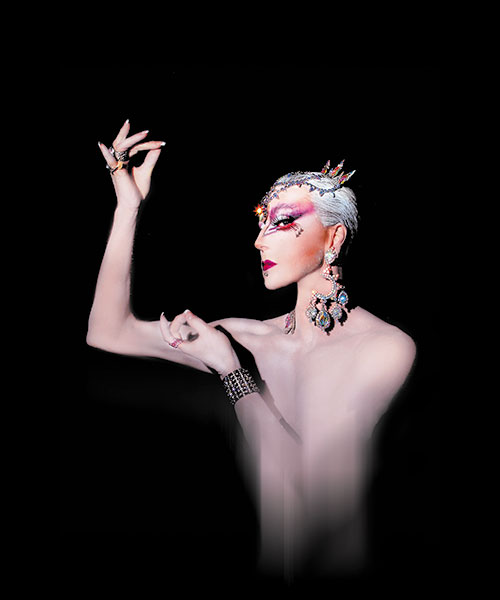 The restaurant/disco/show bar owners — a lesbian couple — were so impressed that they offered the newly-birthed “Tasha Kohl” a regular gig. She would perform Friday and Saturday nights for $15 a show and free drinks. It was the free drinks that sealed the deal, Kohl said.

Before too long though, Kohl was offered a job as a puppeteer with a company that traveled the country putting on shows. For a country boy raised in Mansfield, it was a chance to see the bright lights and big cities he longed for, and he jumped at the chance.

Eventually, though, the country boy was ready to go back to Fort Worth, and when he did, he got back into the world of drag. Kohl was soon offered a Thursday gig at The Split Image, a lesbian bar. Then he got a Sunday gig at a different bar and eventually entered the Miss Gay Fort Worth pageant, which Lindsey Love won.

Kohl had only been back doing drag “for about six to nine months” when he decided to enter the Miss Gay Dallas pageant. The pageant had recently been opened up to entertainers who lived not just in Dallas County but in any of the counties adjacent to Dallas County, and Kohl hoped that entering it would get him exposure — and maybe even some work — beyond Fort Worth and Tarrant County.

Kohl said he entered the pageant just hoping to be seen, but then — “Holy shit! I won!”

Immediately, he was offered a regular gig at The Landing, then Dallas’ premiere show bar. Although The Landing only lasted a couple of years in all, it proved to be a stepping stone to an even bigger career. It was also the place where, thanks to show emcee and Miss Gay America 1980 The Lady Shawn, Tasha Kohl earned the nickname “the body without a mind!”

While competing at a pageant, Kohl met Naomi Sims, and one of Naomi’s backup dancers was Kohl’s then-boyfriend’s best friend, creating a connection between Kohl and Naomi that became a close friendship. That friendship led to Tasha Kohl becoming a regular cast member and part of the legendary Fantastic Five at The Copa in Houston: Tiffany Jones, Naomi Sims, Donna Day, Hot Chocolate and Tasha Kohl.

Kohl continued to live in Fort Worth, traveling to Houston each weekend for the shows.

“Tiffany Jones was the first person I actually knew to die of AIDS,” he added. “That was the beginning of the nightmare time.”

But despite all Tasha’s successes, it was a time of darkness and sadness for the Texas LGBTQ and drag communities.

Kohl moved from Fort Worth to Dallas, and the boom continued “until about 1993,” Kohl said. “By that time, I had just taken so many hits. I had lost so many friends. Lady Shawn had even moved in with me for a while at the end of her life. That was a very hard thing to deal with.

The darkness and the sadness began to take over.

Burdened by the loss of so many friends and by the question, “Why them, and not me,” Kohl began a downhill slide.

“I was always an alcohol abuser,” he said. “But when things got worse, I became an alcoholic. There was just so much more drama and sadness that went with it all then.”

Everybody [in the drag world] thought I was dead.”

The seclusion lasted for more than a decade — until August 2008, when “out of the blue, I got a call from somebody looking for legendary drag queens to perform on a cruise. They wanted me and Hot Chocolate. I don’t know why, but I agreed to do it.”

The cruise consisted of three shows a day, three numbers a show, and it was a time when “my alcoholism was at its height,” Kohl said. “I would wake up and drink vodka to get leveled out, then I would drink wine all day — 24 hours a day for seven days.

After the cruise, Kohl continued to perform here and there for about a year, and he continued to drink heavily — until August 2009: “Aug. 3, 2009 — that’s when I went into detox.”

After detox, Kohl joined a gay 12-step program in Dallas. The group regularly staged drag shows to raise money, and when those in the group realized that he was actually Tasha Kohl, “They were like, oh bitch, you are IN the show!” he recalled.

Now clean and sober, Kohl said, he continued to do the cruise gig for nine years, ending up as show director before it was all said and done. And when it was done, his boyfriend, Temor Tucker, urged Kohl to keep on performing.
“Temor said, ‘You’re still relevant. So you should get out there again and perform.’ But I had been doing it all myself, and I told him if I were going to start performing regularly again, I would need a promoter. He said, ‘What does a promoter do?’ I said, ‘You sell tickets.’ And here we are.”

Mixing old and new
While the Icon shows started out as a vehicle for bringing back the “old school” drag performers — like Hot Chocolate, for example — Kohl said this month’s show was cast specifically in an effort to “broaden the appeal.”

The Icon Show still targets an “older” audience; “I know there are plenty of people out there who love a good drag show, but who don’t want to be out all night, waiting for a show that doesn’t even start ’til 11!” Kohl said. “I mean, I am 61 [62 on Feb. 23], and I don’t want to be out that late anymore!”

But at the same time, Kohl said, “I also want to reach out to a younger crowd. That’s why I am bringing in some of the newer entertainers.” That includes Cassie Nova as emcee, Dragula star Evah Destruction, trans woman Mulan Alexander and Porter Bella Graves. Porter Bella is a cis-female drag queen, marking a first for Kohl’s Icon shows.

Paving the way
Looking back, Kohl said, “I never really thought I was talented. I just kept trying everything to find my special ‘thing.’ I’ve never been a beauty queen, and I am certainly no dancer.”

It was the comedy numbers that helped establish Tasha Kohl — “There’s no cooler high than to make people laugh with you,” Kohl said — but at the same time, “you can’t sustain a career just on comedy.

“So, I think the key is creativity. Just keep on coming up with something new and different.”

Kohl said, he realizes that he and the performers he worked with back in those early days helped pave the way for the drag as mainstream entertainment, that they helped set the stage for TV shows like RuPaul’s Drag Race and Dragula.

And while he is “grateful to be a part of that history,” that was not what he had in mind when he started.