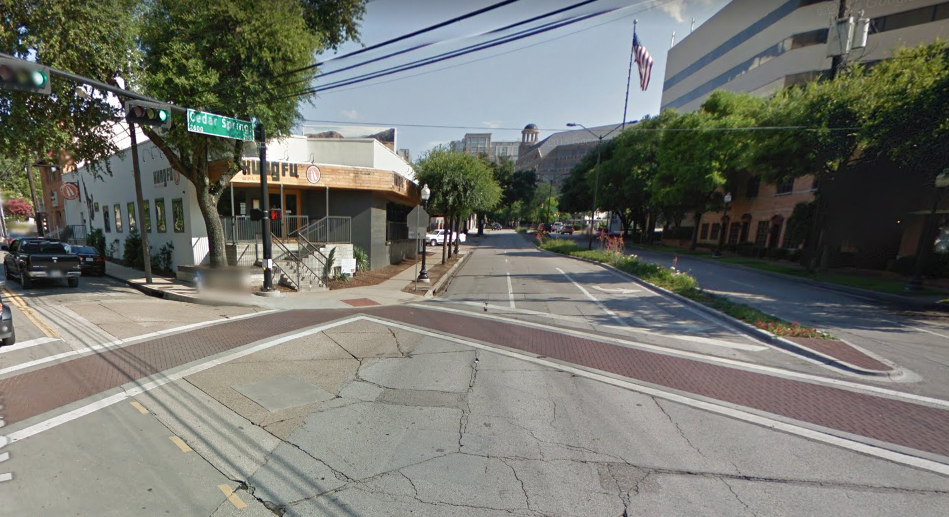 An as-yet unidentified woman was crossing Cedar Springs Road near the Routh Street intersection, from east to west (right to left in the photo), when she was struck and killed by a hit and run driver on Sunday afternoon. The driver was arrested after an accident a few blocks away at Maple Avenue and determined to be intoxicated.

Police still have not identified a woman killed by an allegedly drunk driver Sunday afternoon, Feb. 16, in Uptown, but the woman who hit her has been arrested and charged with intoxication manslaughter.

At about 4:56 p.m. Sunday, the victim was crossing the road, from east to west, in the 2500 block of Cedar Springs Road, near the Routh Street intersection, when she was hit in the crosswalk by the suspect, 42-year-old Swinetta Marsh. Sources told Dallas Voice that Marsh worked as a bartender at Marty’s.

Police said Marsh was traveling “at a high rate of speed in a Polaris Slingshot XL.” After hitting the victim, Marsh fled the scene but was involved in an accident just a couple of blocks away at the intersection of Cedar Springs and Maple Avenue. Responding officers arrested her there and determined her to be “under the influence of alcohol.”

The victim was taken by ambulance to Parkland Hospital, where she was pronounced dead. As of 7 a.m. today (Monday, Feb. 17), police said, the woman had not been identified.