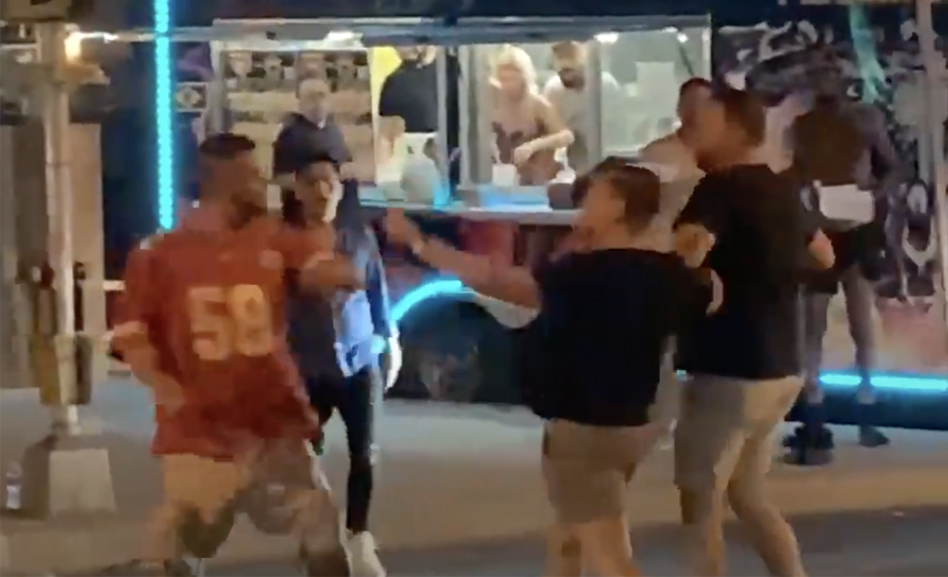 This video was sent anonymously to Dallas Voice. It shows an incident that happened between 2:45 and 3 a.m. Monday, Sept. 20, when a man driving northwest on Cedar Springs nearly hit a group of pedestrians. crossing the street in the crosswalk at Reagan Street. Witnesses said the man was exceeding the speed limit.

The pedestrians then threw plastic water bottles at the truck, prompting the driver — the man in the video wearing an orange jersey with the number 58 on the front — to stop, get out of the truck and approach the pedestrians. Witnesses said he was yelling anti-gay slurs and insults and that he was holding a knife in his right hand.

Others stepped into separate the men, avoiding an all-out fight.

This incident happened at about the same time that Justin Thompson was shot and killed outside the Flamingo Apartments, near the intersection of Reagan and Hall streets, just two blocks away.

It also happened in the same crosswalk were two pedestrians were struck and injured by an allegedly distracted driver. who was headed southeast on Cedar Springs, just a week earlier on Sunday, Sept. 12, at about 9:40 p.m. Dallas Voice has sent this video and a photo showing the license plate number on the truck to Dallas Police.

Dallas Voice has sent this video and the photo of the license plate on the truck to Dallas Police.