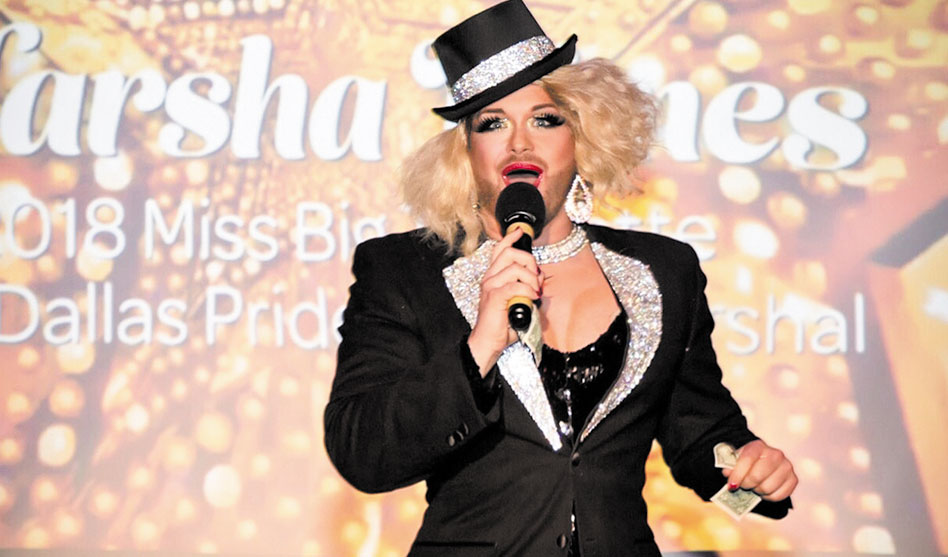 With a pandemic, an economic collapse and, well, a less-than-traditional president, this has been anything but a normal election year. So why should your election coverage be normal?

“In 2016, I was sitting at Woody’s crying on election night,” Marsha said. “Show tunes night was ruined.”

So when Marsha was thinking about this year’s election, she couldn’t stand the thought of watching pundits analyze the numbers to death as they wait to see who will lead the country for the next few years. And she knew just what would be missing. In between, “And we call

Alabama and its nine electoral votes for Biden,” she knew the evening needed some glamor, sequins and alcohol.

“We can have fun, drink a little and ask the audience to donate to the Victory Fund,” Marsha said. 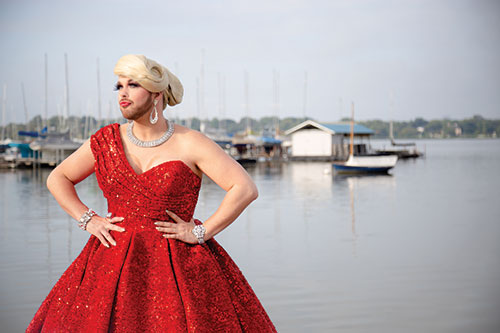 The LGBT Victory Fund trains LGBTQ candidates how to run for office, including how to raise money, and then endorses those LGBTQ candidates with a reasonable chance to win. Money raised by donors like Marsha is distributed to the Victory Fund’s endorsed candidates.
So she put together a team of correspondents and has been researching races. Her coverage will lean toward LGBTQ candidates running in Texas and around the country. In Texas, there are a slew of them — 11 people running for the Texas House of Representative and two running for Congress.

Marsha explained why that’s so important: “We can’t be seen if we’re not at the table.”
In addition to LGBTQ candidates, Marsha said she’ll also focus on the Democrats’ attempt to flip the U.S. Senate. This year 35 Senate seats are up for grabs. Of those, 23 are currently held by Republicans. She said she’ll particularly be watching the races to unseat Senate Majority Leader Mitch McConnell, South Carolina’s “Ladybug Graham,” and Texas’ John Cornyn.

Marsha said she’s been doing way too much reading to prepare.

But much of that reading has focused on which areas of which states will swing that state one way or the other and turn red states blue or keep a purple state in the Trump column. She said she’ll be watching where Biden can flip a county and change the electoral map.

Speaking of maps, once Marsha decided to do an election night broadcast, she realized she couldn’t be outdone by CNN in technology and graphics. Technology would help her pull up numbers from Philadelphia and Pittsburgh, the parts of the Pennsylvania crucial for a Biden victory in that state. And graphics — she knew she couldn’t do any sort of election coverage without graphics that would allow her to turn a state on her map blue or red.

But, she said, she balanced that with another important issue for drag queen election coverage — how much sequin can you actually wear?

As she prepared for the show, she realized she needed to prepare for all possible outcomes. In 2016, network late night talk shows all went live. All they were ready for was a Hillary victory. When Trump won, the talk show hosts had nothing to say. They delivered one of the most lifeless evenings in election coverage history.

So Marsha is preparing for any outcome. Although she described her show as being completely unfair and unbalanced, she’ll prepare not only for a Biden victory, but also for a Trump win or, more likely, an uncertain end to the evening if not enough votes have been counted in enough states by the time she leaves the air.

And rather than just repeat vote tallies, Marsha’s ready with other useful information. Aunt Marge will be on hand with cocktail recipes and some election-themed food to prepare. Nippy Peakes will offer some biting political commentary, and Tri Truong, appearing as Thai Mai Shu, will help on the technical side along with Marsha’s husband, Clay Kolcak.

What advanced technical equipment will the team by using? Two laptops that they believe can handle it all.

“And a green screen,” Marsha said. “It’ll be fun to see how well our technical abilities come off.”

The YouTube broadcast begins on Tuesday at 6:45 p.m., 15 minutes before the polls close in Texas. Early voting results should begin being released at 7 p.m. followed by a long lag in time before Election Day results are reported and states can be called.

That’s when Marsha said they’ll mix the real news with some fun along the way.

Marsha Dimes’ Election Coverage will stream live on YouTube at https://www.youtube.com/watch?v=nQW59gjaGVo&feature=youtu.be, You can subscribe to Marsha’s channel and set a reminder when the show goes live on Election Night.