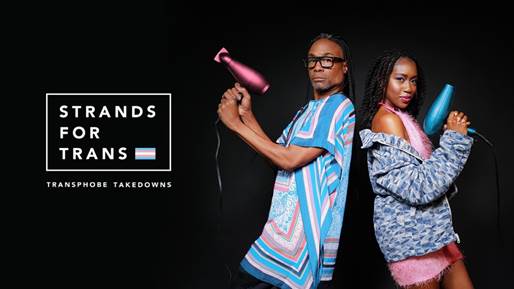 Texas Republicans have been targeting transgender folks in the Lone Star State for years, especially since 2015 when the U.S. Supreme Court handed down the Obergefell ruling legalizing same-sex marriage nationwide. It’s like, since they lost on marriage, the right-wingers decided to target the most vulnerable in our community.

Well, this weekend, as the Texas GOP holds its state convention in Houston, it is the transphobes who are being targeted …

Icon Billy Porter is joining with Strands for Trans — a movement started in 2017 by Barba Grooming Salon in NYC to create trans-friendly barbershops and hair salons across the country — to “hyper-target” Ted Cruz and Greg Abbott at the convention (which started today, Friday, June 17, at Houston’s George R. Brown Convention Center).

“In response to the anti-trans legislation being passed by Texas legislators like Ted Cruz and Greg Abbott, Strands for Trans is calling out these politicians for their bad hair — and their even uglier legislation,” according to a press release.

In the “Transphobe Takedowns” campaign, Porter and multi-faceted poet and influencer Lynae Vanee will be using their own quick wit to “cut down Cruz and Abbott with their quick wit,” as inspired by the scene in the Emmy Award-winning show POSE, when Dominique Jackson’s character Elektra reads a transphobe for filth.

Watch videos of the takedowns below.

“These politicians have no business trying to dictate and legislate who you are and are not allowed to be,” Porter said. “And hosting a GOP Convention over Pride and the weekend of Juneteenth, where they’ll no doubt talk more about stripping people of their civil rights? Hell no.”

The press release notes: “To maximize the impact of the campaign, Barba’s Strands for Trans will crash the 2022 Texas GOP Convention. The #TransphobeTakedowns will be boosted right into the phones of Texas legislators and convention attendees by geo-targeting them at the Houston Convention Center. Petty? Maybe a little. Necessary? 100 percent.”

It concludes: “In the end, the campaign is designed to create positive change for the trans community. Each of the #TransphobeTakedowns concludes with a call to action to StrandsforTrans.com, where owners of inclusive barbershops and salons can add their businesses to the Strands for Trans registry and trans allies can write to their legislators demanding an end to anti-trans legislation. With over 7,500+ salons already registered, it’s safe to say anti-trans legislators are about to have very full inboxes. And some very bad, bad-hair days.”