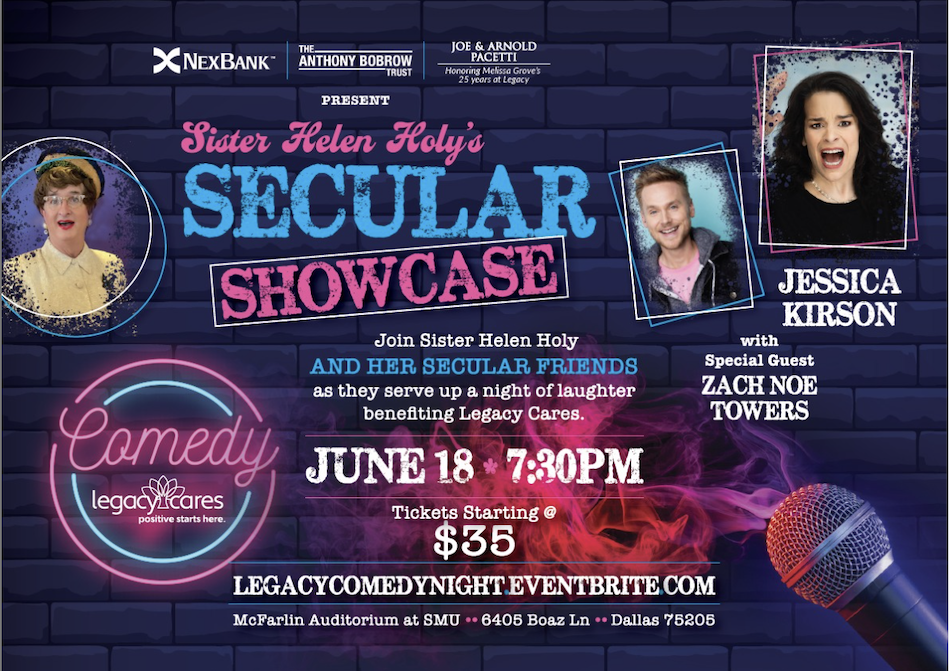 Sister Helen Holy is back and bringing friends with her. Join us as Helen Holy and her secular friends serve up a night of laughter benefiting Legacy Cares.

Featuring Jessica Kirson: Jessica Kirson is a powerhouse on stage. She’s a hilariously relatable performer of sheer silliness, vulnerability, and ridiculous characters. Her countless comedic character videos have racked up over 50 million views on social media. Her audience is multigenerational, creating an excuse for large groups of friends and families to spend a night out together. In an era where only 10 percent of all touring comedians are female, Jessica stands out as one of the strongest comedians regardless of gender.

Special Guest Zach Noe Towers: Zach Noe Towers is an LA-based comedian, actor, and writer. He can currently be seen hosting on the E! series Nightly Pop, on the E! series Dating #NoFilter, as well as on season 3 of Netflix’s Dear White People. Zach was selected to be a New Face at the prestigious Montreal Just For Laughs Festival 2018, and was one of Time Out Magazine’s “2018 Comedians to Watch.” He recently sold his horror-comedy feature film script MEAT MARKET to A24, which is now in development at WONDALAND (Janelle Monae). Zach’s short film KILLER FRIENDS (which he directed, wrote, and starred in) was screened at many film festivals both domestically and internationally, and won the overall audience award at Dances With Films.