This is our youth 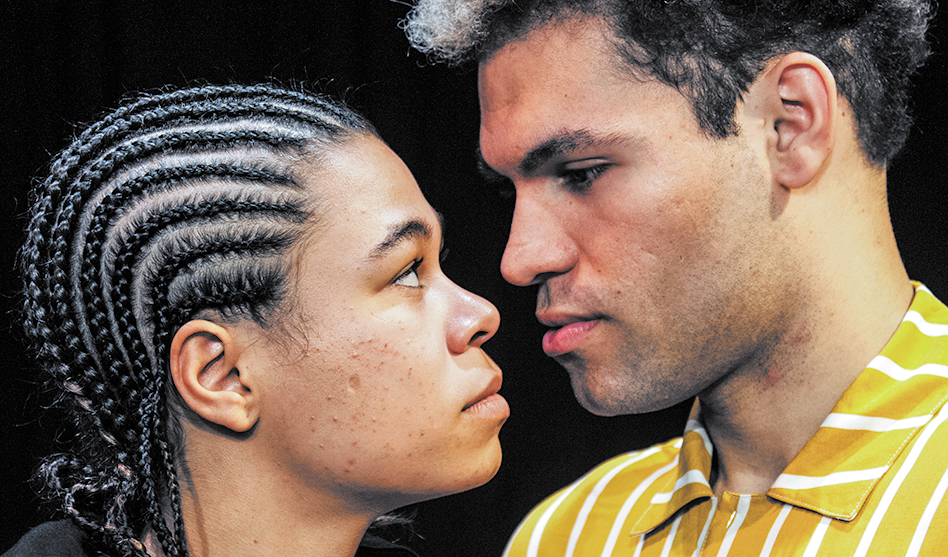 J. Davis-Jones and Dominic Pecikonis relate deeply to the characters they are playing in
‘Swimming While Drowning.’

For the cast of Cara Mia’s ‘Swimming While Drowning,’ the pitfalls visited upon queer Latin youth strike close to home

Set in a large city’s LGBTQ youth shelter, Emilio Rodriguez’s Swimming While Drowning is a fictional coming-of-age story of two teenagers, Angelo and Mila, who seek asylum after they’re forced to leave home because of their queer identities. And after they become roommates, they form a bond and learn to address internal struggle while trying to survive in the face of destitution.

The play delves into issues of child homelessness and queer identity in the Latinx community. But for the show’s two actors, it means much more than playing roles: It’s about portraying experiences that eerily resemble their own lives.

“It’s kind of a cathartic thing for me,” says Dominic Pecikonis, who portrays Angelo, the dreamer of the two.

“The things that these characters go through and the growth that they have are things that I wish I had as a queer person growing up.”

He found the opportunity important enough that he flew back from New York to his native Dallas when producers with Cara Mía Theatre Co. invited him to play Angelo for this regional premiere. Although he’s now 26, Pecikonis connects with Angelo as someone who is “creepily similar” to himself; during rehearsals, he had to conjure the vulnerability he felt as a teenager.

“I knew I had to do it because it feels bigger than just doing a play,” he says. “We’re focusing on people who don’t get enough attention, and I feel it’s going to start some conversation that needs to be had.”

Opposite Pecikonis is J. Davis-Jones as the mixed-race streetwise hustler Mila, another runaway who Angelo eventually confides to.

Rodriguez originally wrote Mila as a gay male character, but with the playwright’s permission, Cara Mía’s creative team made him transgender specifically for Davis-Jones, who is trans. This offered Davis-Jones the opportunity to embrace a role and share it with the audience reflective of genderfluidity. But Mila’s gender does not define the narrative.

“I hope the audience understands that the show is not about the fact that Mila is trans,” Davis-Jones says. “I feel like when you see a show that includes a transgender character, that’s the whole production. But this is about two people living their lives and trying to be resilient. It’s not about the gender; it’s about the journey.”

Davis-Jones knows Mila’s journey, because he lived it. Not long ago, he turned to CitySquare TRAC, a Dallas nonprofit that provides housing for homeless youth who need to escape dangerous living situations. He recalled several other young LGBTQ folks he met at CitySquare who, like his character, fled to the shelter out of desperation.

“It was very sad to see that,” says Davis-Jones, now 23. “A lot of the people there were younger than me.

Being able to be a part of this show and dive into this process from the point of view of a 15-year-old hurts my heart, because I was 21 or 22 going into that process — at least I was an adult and could figure it out a little bit better. I don’t know how I would have survived if I were 15.”

Davis-Jones connects with Mila, understanding the urgency to seek safer environments. The 23-year-old actor lived Mila’s life and hopes to capture on stage what he witnessed while staying at a shelter – youth swept away by bigoted whirlwinds of race and sexual identity.

“Something I realized when I was in that situation and part of CitySquare TRAC is that a lot of kids put in that situation were put in that situation,” Davis-Jones says. They had to run away because they were in dangerous situations. They were dropped by CPS, and they had no idea what to do. They were lost in this system that was set up to sweep them under the rug. And with a play like this, it is important for people who come see it to open their minds more to what these characters are experiencing and to leave feeling they have the power to change what is happening. Because they do.”

Neither performer has acted in a play quite like Swimming While Drowning. Both embraced a challenge to relive memories and feel scars left from their teen years. And now, as they channel themselves through Mila and Angelo, Davis-Jones and Pecikonis hope their performance will start conversations about LGBTQ youth and Dallas’ homeless children.