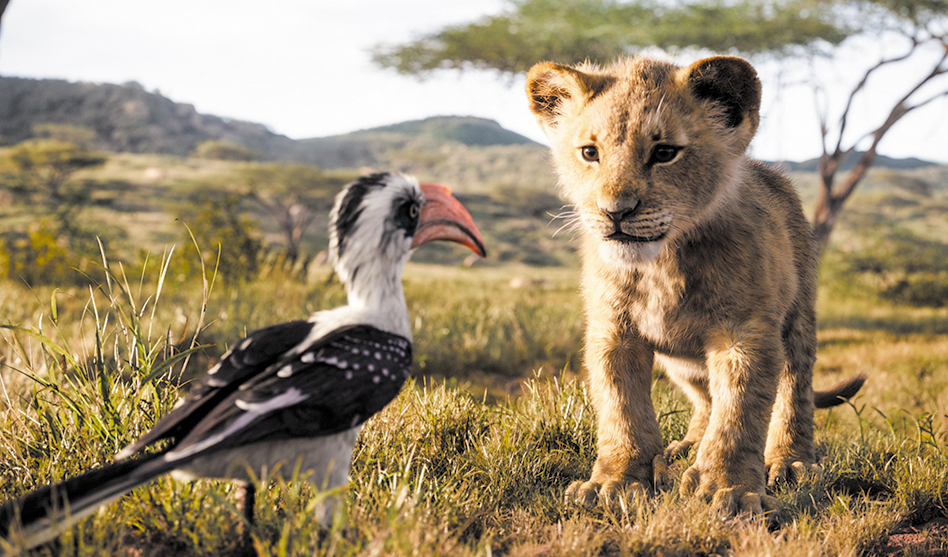 Zazu (John Oliver) upstages Simba… until a meerkat upstages him.

It’s been nearly 50 years since a roboticist first coined the phrase “uncanny valley” to describe the point at which human facsimiles progress from being eerily accurate to just plain creepy, but computer graphics have taken this attraction-revulsion dichotomy to an unimaginable level. We look at the anthropomorphic characters in a film like Toy Story 4, or even a motion-captured performance in a movie like The Avengers, as we know we’re being fooled, even as we admire the skill of it. But those films are inherent fantasies — chimeras that create a foreign world.

Things get a little more complicated with the new version of The Lion King.

Consider: There was not a time, during the entire “filming” of that movie, when an actual camera was ever employed. Not a single living actor was used onscreen… ever. (Even The Jungle Book used an actual boy playing Mowgli.) It was created, in its entirety, among the pixels and electrons of a massive server farm, every moment carefully plotted and programmed and rendered. Animated films do that all the time (at least since the decline of cel animation), but what they do here? Well, it’s simply uncanny.

Not, though, in the bad way… at least not entirely. (It probably helps that all the characters are animals; no real humans were harmed in the making of this film.) During the opening sequence, when the baboon Rafiki holds the cub Simba aloft on Pride Rock for all the creatures to see, you can’t resist staring in awe at the beauty and accuracy of richness of his mane, of the sunlight reflecting on stone, of the reticulation of the insects. It’s so impressively realistic… and then it strikes you: Wait, gazelles are coming to pay obeisance to an apex predator? Giraffes are appearing, like the magi, to honor their king? Huh!?!? When it happens in line-drawn cartoons with cuddly human features and glistening eyes, the kumbayaness of it all is essential to the charm. When you aim for photorealism? Well, let’s just say the director, Jon Favreau, has exchanged authenticity of visuals for verisimilitude of story. It just rings false.

At least it does for a while. Eventually, once the animals begin to move their mouths and tell lame jokes (in English!), the realism is undercut. And then your focus recenters: Why remake one animated film 25 years later for another one without significant changes? It seems, “because we can.”

That has been an increasingly worrying refrain in Hollywood, and especially Disney, in recent years. The House of Mouse seems to have a two-pronged approach to growth: Superheroes and repackaged classics. Its purchase of Fox Studios was clearly a craven grab to control the remaining properties in the Marvel canon (Fantastic Four, X-Men, Deadpool) so that they could consolidate ownership of the most lucrative cinematic property in recent vintage (and add it to their Star Wars franchises). Then — starting with Maleficent in 2014, and continuing through Cinderella, Jungle Book, Beauty and the Beast, Dumbo, Aladdin, the upcoming Mulan and Little Mermaid and now this — Disney is merely rehashing its track record of saleable stories with a techno-twist. Of the 30 wide-release studio films released since Endgame, 15 have been remakes or sequels. It’s all about the opening weekend grosses and overseas roll-outs. Longevity, word-of-mouth, creativity? Not major concerns.

Of course, art can emerge from commerce (and even legit entertainment), but I wonder why we all will line up for The Lion King again, just to hear the same songs, see the same story, revisit … well, everything.

It’s not as though the show isn’t problematic structurally. Like the stage musical, it shoots its load in the magnificent opening number (“Circle of Life”) and there’s no place to go but down. And the other signature song from the 1995 version, “Can You Feel the Love Tonight,” was performed as a single by Elton John; the lyrics don’t fit into the narrative of any characters, and shoehorning it in never works. (New, not-very-good lyrics here just diminish it even more.)

Still, there are some good reasons to seek it out. The star of the first half of the film, beyond its mere existence as a work of engineering, is John Oliver’s voice work as Zazu — prissy, droll, incisively-delivered. But he is soon upstaged by Billy Eichner as Timon, whose catty, flamboyantly whiny vocal performance could stand on its own in a one-man show. (Less interesting by far: Donald Glover and Beyoncé, who bring virtually no shadings to the two leading characters.) Add to that Hans Zimmer’s amazing new underscore and Favreau’s admirable modulation of the emotions, and this film, like Simba himself, eventually finds its roar.