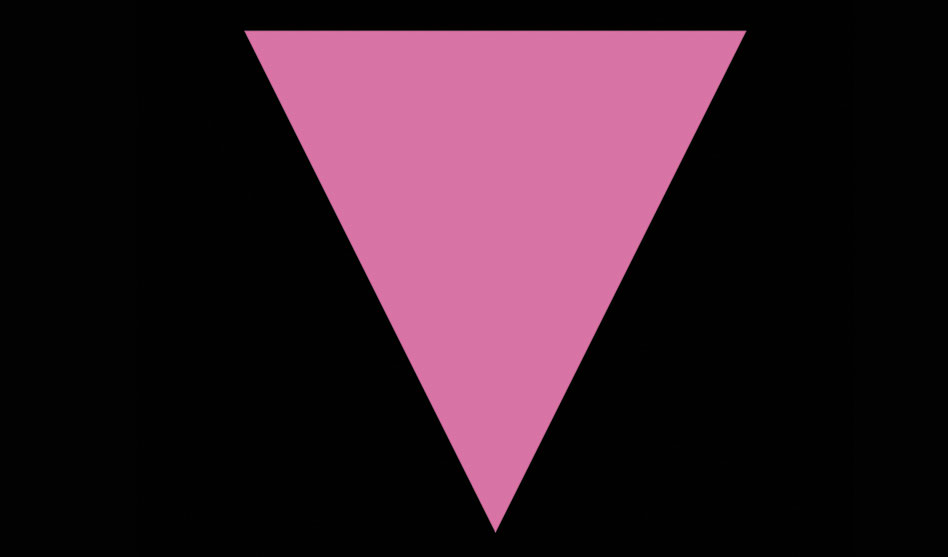 Reclaiming a symbol of hate

Humans have used symbols and iconography to communicate and to identify things going back to when someone made the first drawings on cave walls. Using symbols to communicate pre-dates language and the written word, but symbols remained in use even after language became commonplace. This includes symbols and icons used to identify, segregate, promote intolerance and hate for groups of people.

Such usage was especially true when it came to the persecution and systematic targeting of minorities by the Nazis under Hitler.

The SS created a unique classification system to identify those they wanted to target: Jews who had to wear a yellow Star of David, which is formed by two triangles. Criminals had to wear a green triangle. Political prisoners such as social democrats, liberals, socialists, communists, anarchists, gentiles who assisted Jews, trade unionists and

Freemasons had to wear a red triangle. People deemed to be asocial elements and work-shy — Roma and Sinti, the mentally ill and mentally disabled, alcoholics and drug addicts, vagrants and beggars, pacifists and conscription resisters, prostitutes and lesbians — all wore some version of a black triangle.

And then there was the pink triangle. That was the badge for homosexual men.

It is important to note that early on, gays were not singled out for who we were but instead lumped in with criminals or political prisoners and made to wear a colored triangle representing that group of individuals, perhaps giving us more “cover.” The pink triangle came later and was often combined with some other color triangle to designate those belonging to more than one group.

It is no wonder that Hitler would target our community, as so many other societies have, especially given the prominent and visible gay and lesbian culture in Berlin at the time. Even though homosexuality was technically illegal before the rise of Hitler under the Paragraph 175 statute, that law was rarely enforced.

But, as was true of so many groups of people, Hitler saw us as a threat to his efforts to create the perfect race. Just as so many still are today, politically and socially, Hitler was afraid of us. And he used that fear and the hate it bred as his weapon. The pink triangle was his way of identifying, shaming and targeting us.

Wearing the Pink Triangle made gays easily identifiable, thus they were easy targets for other prisoners and guards in the concentration camps. And the pink triangle made it easy for others to continue persecuting gays even after the war ended. Many who wore the pink triangle were transferred from concentration camps to prisons after the war, because Paragraph 175 was still in effect, which meant it was illegal to be a homosexual.

Heinze Heger’s 1972 book, The Men With The Pink Triangle, brought greater awareness to the origins and use of the pink Triangle by the Nazis. As a result, a German gay liberation group used the symbol as a memorial to those early victims and as a new symbol of protest. After the Stonewall Riots in June 1969, our community took what had once been a symbol of hatred and turned it into a symbol of Pride.

We have also used it as a symbol of protest, as was seen during the early years of AIDS and the common “Silence=Death” slogan combined with the pink triangle.

It is important to note that some — a small minority — have criticized using a symbol that originated in hate to represent LGBTQ Pride. In 1993, senior editor Sara Hart of the gay magazine 10 Percent wrote on the topic and received significant backlash for it.

As unique as it is to have reclaimed the pink triangle as our own, it is easy to overlook its historical significance as time goes by. I look at my lack of knowledge and understanding as a young gay man coming out in the early 1980s and how I initially just knew it to be a symbol of our community without proper context.

Yes, the Pink Triangle is now a symbol of Pride, but it should also serve as a reminder of how easy it is to have all we have fought for and earned stripped away from us. As we begin another season of Pride, we need to understand what our community’s symbols represent now, but we also need to understand their origins and what they represented before.