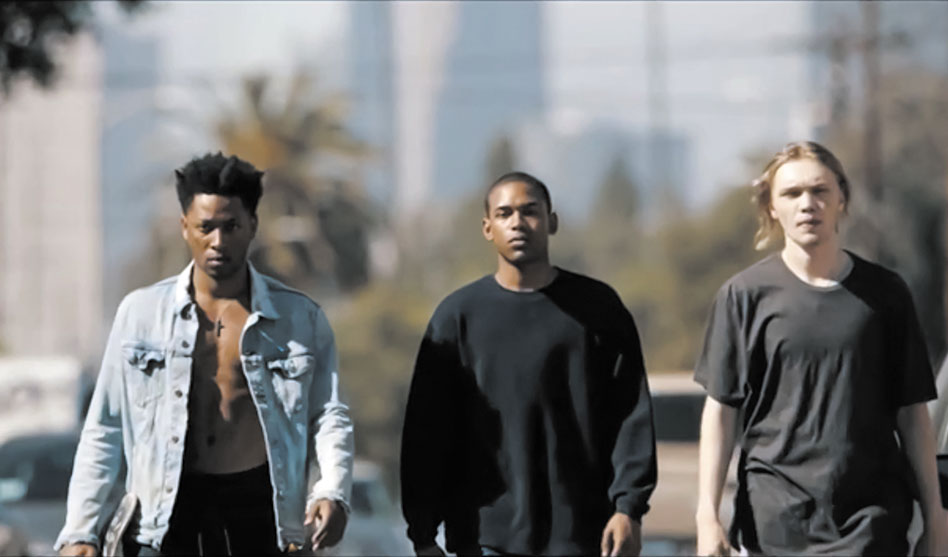 Gully is a heavy, heavy movie. It has an almost physical weight that sits on your shoulders and on your chest as you watch. It sits on your mind and your heart. It is a weight that stays with you long after the credits have rolled. That’s not a bad thing; no one should be able to put this movie aside and ignore what it has to say.

Gully is set in what the promotional material calls “a slightly dystopian” version of Los Angeles. I’m assuming they mean it is only “slightly imaginary,” because I’m pretty sure that this depiction is real life for a lot of people. It is the story of three friends — Calvin, Nicky and Jesse — and the violence that defines their lives. It is about the violence inflicted on them and the violence they, in turn, inflict on others.

I read on IMDb that the name of the film comes from the Hindi word “gully,” meaning “narrow lane.” Where I’m from, “gully” is a Texas word meaning “ditch.” Either definition, I guess, is appropriate, because for Calvin, Nicky and Jesse, life is a narrow lane, a ditch, that leaves you only one way to go.

The basic plot is simple: Three best friends marked from childhood by trauma and violence finally break out into violence themselves, going on a 48-hour rampage of drugs, drink, destruction and death. And then they have to pay the price.

It’s not a new story, but what makes it worth watching is the emotional intensity the young actors bring to their roles.
Keith Harrison Jr. is Jesse, the narrator of the story who actually never speaks; he’s been left dumb by the trauma in his childhood. His two friends are protective, going to extremes to defend Jesse, but at the same time, he seems to be the quiet at the middle of their storm.

Charlie Plummer is Nicky, whose mother is a drug addict who looks barely older than her son, and whose father beat him mercilessly when he was little, until the day his father was killed. Nicky’s girlfriend is pregnant, and even as his life spins out of control, he insists his own child will have a better life.

And then there’s Jacob Latimore as Calvin, the mentally ill teenage genius who seesaws between childlike wonder at the beauty of the universe and an almost incoherent rage that he vents at everyone around, except for Jesse and Nicky.

All three young actors stand out in their own way, but Latimore burns with intensity, making even the opposite extremes of Calvin believable and understandable.

The grown-ups in the movie — most of whom are much more recognizable actors — all do their jobs well. Particular standouts, though, are Jonathan Majors, the newly-out-of-prison former gang-banger who tries to keep the three teens from going down the same path, and Terence Howard as Mr. Christmas, the kind of one-man Greek chorus of the movie.

Director Nabil Elderkin, who made a name for himself directing music videos, proves adept in his feature film debut at using images to press into your perceptions the isolation and insignificance his characters feel — the upward shot of two or three towering palms against the blinding brightness of the sun in an almost colorless sky; a single, distant airplane droning through that same colorless sky; shots of a neighborhood from a bird’s-eye, bland blocks of housing and near-empty streets.

This is not a fairy tale, so needless to say, there is no happy ending. In fact, as the film progresses you might well believe the three don’t deserve a happy ending. But what is never in doubt is that they DID deserve a happy beginning. That they never had a chance at that is the weight that will stay with you.

Gully opens in select theaters today (Friday, June 4) and will be available digitally on June 8.