The life of an activist 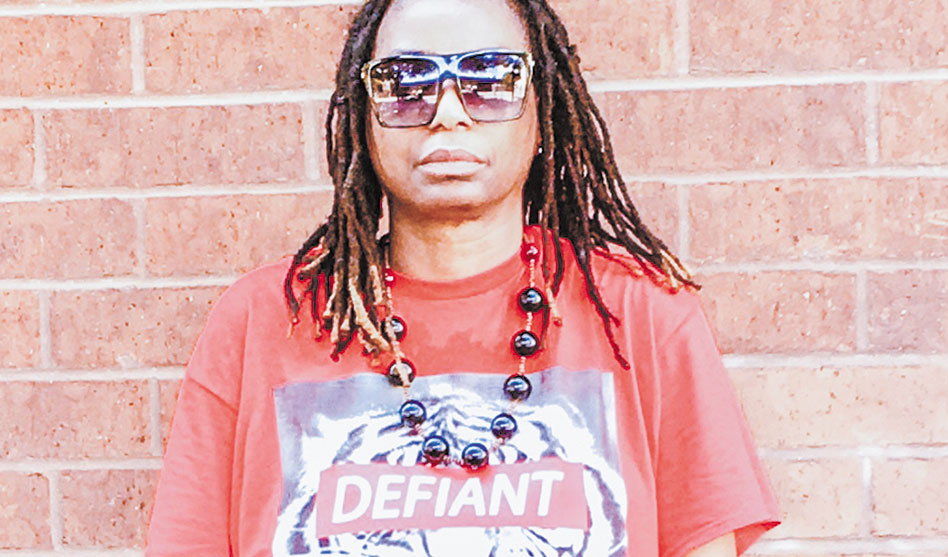 C.d. Kirven helped lay the foundation that today’s protests are building on

C.d. Kirven has been an activist in the Black civil rights, LGBTQ equality and women’s rights movements for decades. In the weeks since a now-former Minneapolis police officer named Derek Chauvin killed George Floyd, Kirven has participated in and monitored the near-daily protests taking place here in the streets of Dallas.

Kirven sat down recently for an interview with Dallas Voice to talk about her history and what she thinks of what’s happening now in the streets across the country.

Dallas Voice: Thanks for taking the time to speak with me, C.d. I wanted to chat with you about you, your history of activism and your view on the protests, including the night of June 1 on Margaret Hunt Hill Bridge. You were there that night, correct? Cd: Yes, I was.

Ok then, let’s start with how you got into activism, and then we can weave that into the protests over the past few weeks. Well, I guess my first foray into activism was probably 18 or 19 years ago. At the time, I had read in the newspaper about the food pantry program, which was about to go out of existence. It was a place where 3,000-something HIV-positive homeless people would get their only meal of the day. So I said to my girlfriend, “You know what, I’m not just going to turn the page … . I’m really sick of opening the paper and seeing this going on.”

So I started a fundraising program to help save the center, and eventually, it got a big grant and was integrated into the Dallas Resource Center. I got everyone I could, including the drag queen community, to help out.

So that was my baptism by fire, my first foray into activism. After the success of that program, the conversations I was having began to shift toward race relations in the LGBT community. So I wrote this article for the Dallas Voice, which began a contextual conversation about how segregated even the LGBT community in Dallas is. At that point, I met some local activists who got me more involved. We decided to get more aggressive regarding LGBT rights.

What did that look like? Forty-five activists were flown from across the country — black, white, lesbian, almost everybody — including myself. We were trained about Martin Luther King, about Rosa Parks — you know, that whole bus thing was all planned — and we developed ideas of what we wanted to do going forward. And then we all flew back to our home cities to try to make it happen.

Eventually, the group came to Texas, and we decided what we were going to do here. I helped get everyone behind the organization Get Equal. We started doing local and national actions, including protests at Speaker Pelosi’s Office and the Republican HQ. It was an organization that kind of was a mixture of people that felt forgotten, and it also was people that wanted to take LGBTQ action into more of a civil rights fight for our era. 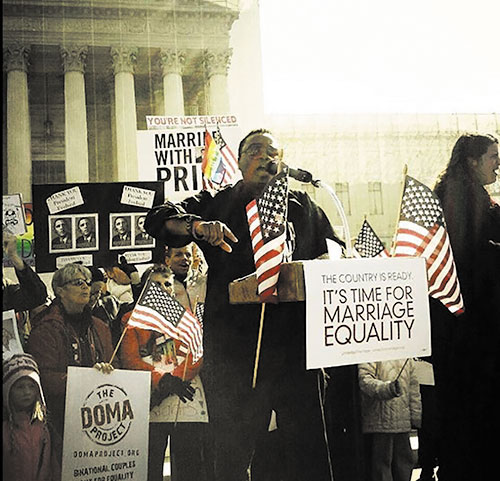 C.d. Kirven speaks at a protest outside the U.S. Supreme Court during the DOMA hearing

And then we came back and just did more work. I had been discussing on the radio the tense race relations in the LGBTQ community in Dallas. Because you know, just as an example, we hadn’t had a [black] marshal, a grand marshal, in the Dallas Pride parade for over, like, 30 years. When they eventually picked someone, it wasn’t someone who had … done the sort of work that previous grand marshals have done in the community. It felt like it was just an attempt to shut up the community of color in the LGBTQ community.

So you’re saying it was a symbolic gesture that didn’t align with the people facing the issues and doing the work to solve them? Right. It’s just an acknowledgement that we have a race problem, a severe race problem, but that’s about it. And when we get to the point, you know, we wouldn’t even have Pride if it weren’t for women of color and trans women of color. Yes, that’s the reality.

And then I hear a lot of chatter on social media from white people in the LGBT community saying, “Oh my God, look at all that rioting.” Well, Stonewall was a riot.

And not only that, it was a police riot. Yes! They were tired of police doing whatever they wanted. And it’s the same thing that’s going on now. So yes, you know, I’m severely frustrated. But I’m also very encouraged. Because of the combining of the Black Lives Matter movement with the gay community, and the gay community saying, “We’re behind you,” that it’s all the same fight.

Yes, I’ve seen that at protests myself. I also have seen the bifurcation of opinion in the LGBT community you’re describing, sort of based around who has been the primary beneficiaries of these victories that have occurred over the past couple decades, like marriage equality. I’ve heard people express they felt like after that, much of the affluent white male gay community stepped away. Right, right. And that’s been a big issue. For years in Dallas we’ve had a “regular” Pride parade and a Black Pride parade. That’s because of segregation.

But we are seeing people trying to combine these efforts now. I’m proud of all these people who are saying enough is enough. And not all of them are Black. You were there with me on the bridge; it was primarily white people! So I have faith that we are not going to drop it.

This is a systematic problem. Racism is integrated into our culture, running through America’s veins. Whether it is slavery, or how they used to drain the pools in Hollywood after Black stars swam in them, or how some politicians recently suggested maybe Black people have COVID-19 more because they’re not clean, or Black people being killed by police on a daily basis.

Even while we’re protesting against police brutality, Black people are facing police brutality. These things are integrated into a bigger issue which is called white supremacy. And so if we don’t have these conversations, then these things continue; our children will have to face it, and our children’s children will too.
Just look at reparations, which I view as an acknowledgement that we were wronged. Native Americans, Asian-Americans abused during the railroads, and other groups have received reparations. The Black community has not. Yet people still say, “Y’all want something for free.”

We’ve never gotten anything for free. We’ve had to fight, which is why I have done that for the LGBT community, for racial injustice, for climate change, women’s rights, DACA and workers rights. I put on the gloves and am ready to fight. And it is hurtful to me that my LGBT community doesn’t reciprocate.

As you’ve said, the fight is intersectional. So I think it’s powerful to hear someone like you speaking not just on the issues of your specific life, but making sure to emphasize the interconnection across all of these issues. The whitewashing of Martin Luther King Jr. erases his focus on class and anti-war. It seems like we’re kind of living through that sort of moment again, right, where all these different people are standing up for their civil rights together. And as you mentioned, the folks that were on the bridge weren’t even predominantly black, but still faced police brutality. It’s almost like anyone who is standing up for black lives risks being brutalized. Exactly. We need to be looking at the police budgets, taking away what is unnecessary, and investing back into these communities, instead of using military equipment to brutalize Black communities. Even the ACLU talks about defunding the police. We have to use the words that invoke the provocative conversation. All you have to do is Google the word “defund” and understand what it means.

Yes. The word “reform” is ambiguous. It could involve giving police departments more money. Right. Like Houston has done. … Talk of “reform” is just propaganda telling us to quiet down about the oppression that goes on at the hands of the police. But people don’t stop. So now we have the term “Karen,” which means a white woman that will call the police on Black people for nothing. And when we talk about defunding the police, we’re talking about taking another tool out of Karen’s racial toolbox, and that’s the fear that’s running down people’s back.

Something that I’ve seen in the daily protests is impatience on behalf of some folks who probably haven’t been confronted with this conversation and have acted aggressively when inconvenienced for eight minutes. I have a question for those people: Is 400 years too long? That’s how long we’ve been waiting. We’ve been patient enough.

Well, I would like to be mindful of your time. Is there anything else you’d like to say before we wrap this up? I want to make sure that I say how grateful I am for this generation, because it was them out there on the bridge with me — out there using their white privilege to stand in front of people like me and continuing to fight. So I want to say thank you. And keep fighting.