The charm of Colombia 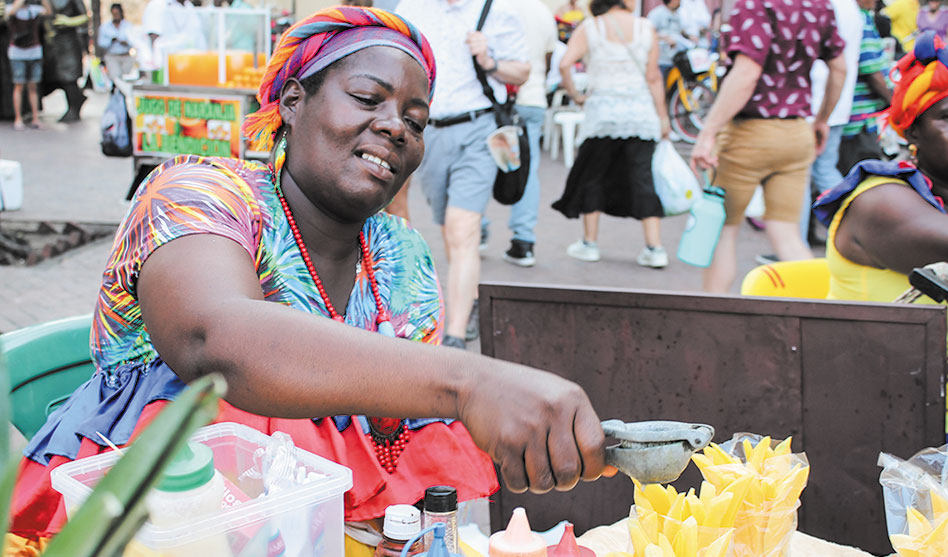 A “palenqueras,” preparing the fruit for our group in San Pedro Claver Square in Cartagena. Photo by Heather Cassell

Colombia is an amazing country — rich with art and culture, food, history, outdoor adventures, beautiful sandy beaches and warm people. I learned this when I traveled to Colombia as a guest of award-winning sustainable LGBTQ travel company Out in Colombia and the country’s tourism bureau, ProColombia, right before the pandemic shut down the world and tourism.

Colombia is a year-round destination, but the best months to experience the South American country are December to March and June to September. 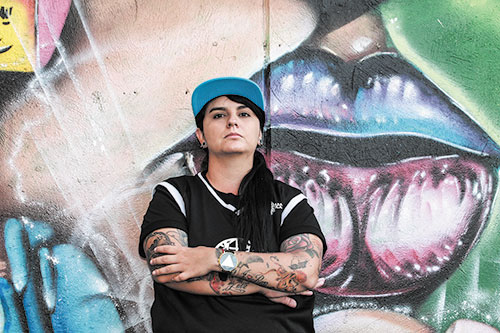 Lesbian tour guide, hip=hop artist, and activist Cata Gutierrez at one of the many murals that decorate Comuna 13 in Medellin. (Photo by Heather Cassell)

Colombia’s LGBTQ movement has made great strides in gaining rights since 1999, according to the Astraea Foundation’s 2021 report.

Bogota, became one of the first cities in the world to establish a government office focused on LGBTQ issues, the Sexual Diversity Department, in 2013. Same-sex marriage was legalized in 2016.

Out in Colombia
It was Colombia’s beauty, people and progress with LGBTQ rights that made gay American expatriate Sam Castañeda Holdren, 41, fall in love during his first visit in 2013. He traveled to Colombia on a three-month career break to learn how to speak Spanish fluently.

In 2014, the Fresno native packed up and moved to Medellin, once the center of Colombia’s drug trafficking run by the infamous drug cartel Pablo Escobar. It didn’t take long before Castañeda Holdren discovered he loved sharing what he was learning about Colombia and the country’s LGBTQ life with queer people on his blog and with friends in the states.

In 2016, he founded Out in Colombia to continue sharing his love of the country and promote its queer culture and businesses. Out in Colombia offers custom and packaged tours in English and Spanish. In 2021, he set up a foundation, Cocora Alliance, through which a portion of the proceeds from traveler’s trips are donated to the local communities. 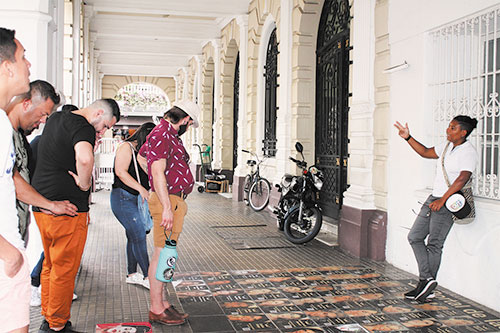 Colombia is famous for its beauty queens, coffee, beaches, tropical jungles and its darker side with its drug lords. But the drug lords have been pushed deep into the Amazon on the Brazilian and Colombian border with the U.S.’s help, according to Sebastian Fernandez Leal, a representative with ProColombia who formerly worked at the United Nations in New York.

Colombia is home to more than 25 national parks and is also the only country in South America with beaches on the Caribbean and Pacific coasts. World-renowned artists call Colombia home. Its coffee is famous. The country is a gastronomic hub.

Columbia has a creative and energetic LGBTQ community, even boasting Mega LGBTQ nightclub Theatron features 16 separate but interconnected dance clubs, including a concert hall, all in one building that takes up an entire city block in Bogota.

My journey with Out in Colombia began in Cartagena and took me to Barranquilla, Medellin and Bogotá, four of Colombia’s largest cities.

I was taken by the country and people. Colombia’s dark and violent past has given way to a vibrant and welcoming country with a spirited culture, warm people and natural beauty, particularly in Cartagena, Medellin and Bogotá.

Cartagena
In Cartagena, the “palenqueras” stand out in the crowds, women wearing their traditional dresses and head wraps balancing bowls of fruit on their heads. They can be found in the squares, like San Pedro Claver Square, in Cartagena’s historic walled city. Our group enjoyed tasting the traditional fruit snacks sold from one of the women’s stands. They also pose with tourists for pictures for pay. 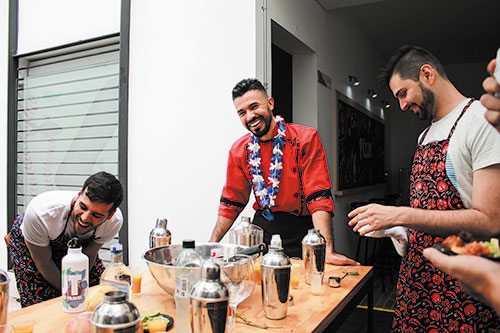 Cartageneras lesbian tour guide Belkin Chico of La Mesa, which works with Out in Colombia, guided our group from Castillo San Felipe de Barajas to the walled city, telling us the city’s history. The tour included a visit to the memorial honoring Colombia’s beauty queens, where our guide explained what the crowned beauties mean to Colombians.

Our evening was spent relaxing on a private sunset catamaran cruise on Cartagena Bay and enjoying a gourmet meal at the stylish Club de Pesca.

Medellin
While Cartagena was dazzling and sophisticated, the mountain city of Medellin was gritty and bursting with creativity. Our group enjoyed shopping at a local market and cooking and making cocktails with gay Chef Esteban in the morning. In the afternoon we went to the notorious Comuna 13, locally just C13, that was once under the control of the Escobar drug cartel.

Today, artists have taken over the hilltop neighborhood and have transformed it. Cata Gutierrez, who grew up during Escobar’s reign of terror in the neighborhood, was our tour guide. She told us how, when she was 8, a gang murdered her family in front of her as they were taking her to school. Her uncles took her in, and she started earning money rapping on the subway while going to school when she was 13 years old. She later joined Casa Kolacho, an artist collective where she found community and thrived.

Gutierrez had just launched C13 Brewing Company as a part of the Comuna Project, at the time our group toured C13.

It’s challenging to be LGBTQ in the community, Gutierrez said. Homophobia remains, but two weeks before our visit, a stairway was painted in rainbow colors in C13. Gutierrez said no one had defaced the steps. Instead, the community was enjoying it.

Bogota
South America’s fourth-largest city, Bogota boasts a thriving LGBTQ community, according to Juan Camilo, our LGBTQ history tour guide. Juan, an LGBTQ ally, told us about that community as we walked through the city, stopping at historical points.

Colombians were just starting to embrace café life, odd as it may seem since Colombian coffee is known around the world. At Café San Alberto, our group enjoyed a coffee and rum tasting that made Irish coffee look boring. The coffee energized us, and the rum gave us liquid courage for our salsa lessons.

On our last night in Colombia, our group enjoyed an elegant evening dining at B.O.G. Hotel with more dancing at Theatron.

Where I stayed
I was a guest of Esestelar hotels in Bogota, Cartagena and Medellin.