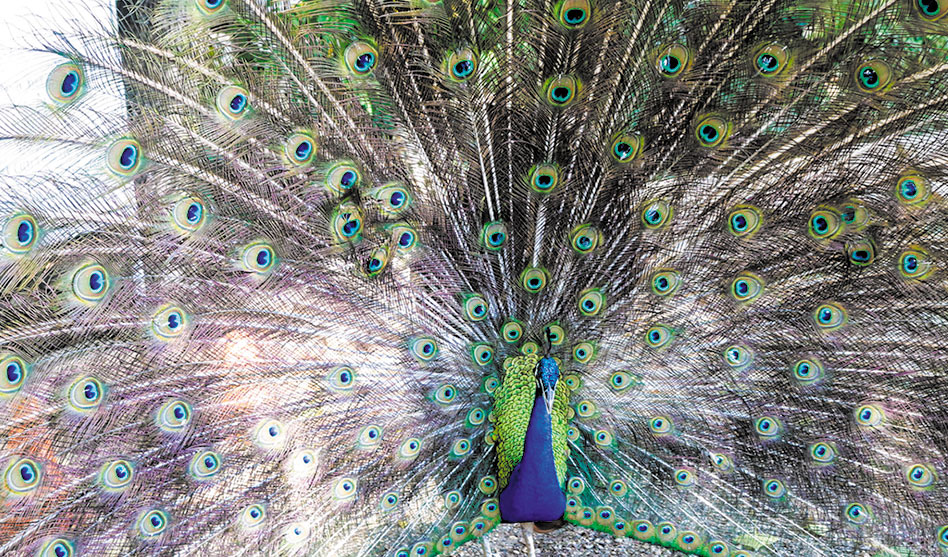 Peacocks, above, and pelicans, below, are among the birds living at Rogers Wildlife Rehabilitation Center.
(Photos by David Taffet/Dallas Voice)

I never thought I’d just walk through a committee of vultures — and yes that’s the right term for a group of vultures that isn’t feeding on dead carcasses. But if they are feeding, they’re known as a wake of vultures.

That’s just one of the interesting things I learned when I was visiting Rogers Wildlife Rehabilitation Center in Hutchins, right off I-45, in south Dallas County.

In the parking lot, we were greeted by a peacock who proudly rattled his train to show off his beautiful plumage, something that most of the other peacocks had already molted by mid-summer. The facility had taken in one couple, but they estimate there are about 80 of the beautiful — but usually aggressive — birds now on the property. They are usually aggressive, but not that we observed. The ones at Rogers must be used to people, as long as people leave them alone. 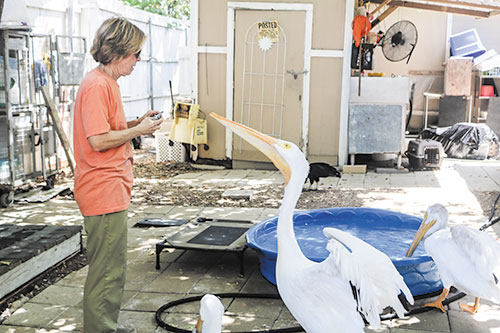 Most of the birds at Rogers arrived there injured. In fact, as we arrived a family was delivering an injured woodpecker they found in their yard. The goal of the sanctuary is to rehabilitate the birds, then set them free.

Some birds, however, were raised from birth at the sanctuary and imprinted on people. They can’t be released because they never learned what it is to be a wild bird. Others have wing injuries that prevent them from living in the wild.

But, oh, those vultures. They arrived on their own, and they know a good home when they see one. So the vultures stay and bother no one — no one alive that is. They make way for visitors and pose for pictures and sometimes follow you around.

They’ll spread their wings in the sun — not sure why. Maybe it gets rid of irritating bugs. Maybe it’s to dry out after getting wet. Maybe it’s a mating call.

Other birds are mostly in cages.

In a cage of crows, at least two of the birds spoke as clearly as any parrot. “I love you,” one crow kept telling me. “What’s your name?” another kept asking. Telling him my name didn’t stop him from asking, and, although the first crow insisted he loved me, I kept my fingers away from cage. They’re crows with sharp beaks, not playful parrots. 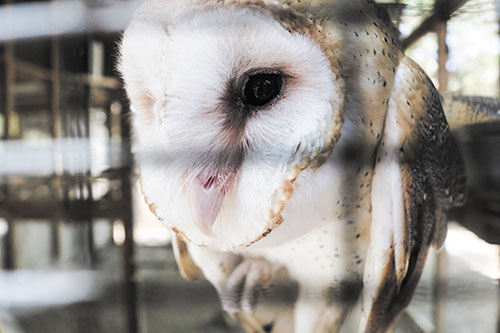 Owls were awake when they should have been sleeping, and they posed for pictures calmly. The story of one pair of owls is posted on their enclosure, as are the stories of several other birds.

Forrest and Sadie are a pair of barn owls who are permanent residents of Rogers. Forrest has been at the facility since he was an egg. When he hatched, he had abnormalities that wouldn’t allow him to survive in the wild.

Sadie came to Rogers at two weeks old. She had fallen 30 feet and has a deformed right wing, so she wouldn’t survive in the wild.

Rat poison and loss of habitat threaten barn owls. Because they provide natural rodent control, better than traps and poison, farmers encourage them to nest.

Prince, a Harris hawk, was stolen from his nest by someone who wanted to turn him into a falconry bird. He was found hanging by a leather strap in a tree. 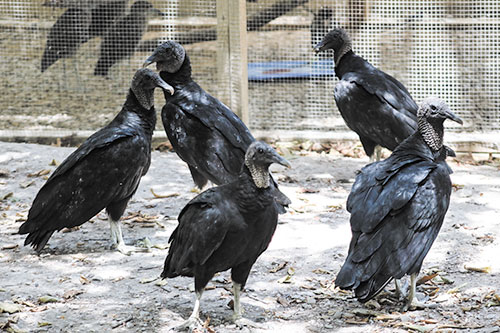 The fire department rescued him after he had been there several days. Prince can’t be released because he doesn’t know how to hunt for food, and he’s too comfortable around people.

About 1,000 birds are on the property at any one time, and 6,000 birds come through the facility during the year. All of the birds are local species — including three pelicans, herons, hawks, vultures and kestrels.

The pelicans were the most surprising to me. But Maggie the pelican, I learned, was found tangled in a fishing line at Lake Granbury. She’s unable to fly, but she’s good at tool retrieval and clearing clogged drains and is officially a member of the grounds keeping crew.

Admission is $5 per person but feel free to bring a few items like paper towels, Dawn soap, bleach or laundry detergent that can be found on the website, RogersWildlife.org. Plan to spend at least an hour. I was there three hours and only left when I did because of this summer’s extreme heat.