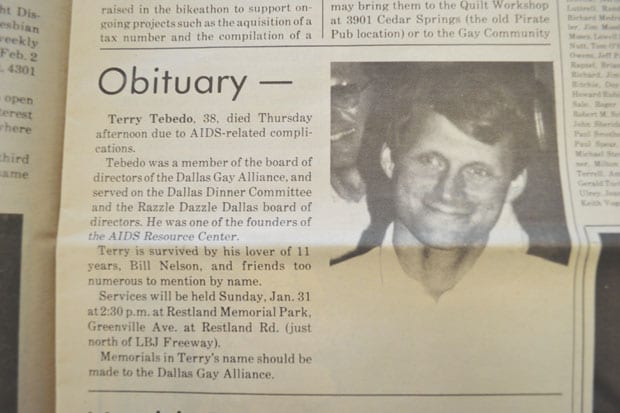 Houston man scanned almost 5,000 death notices into a website, and he’s looking for more to add to his genealogy of Texas’ LGBT community 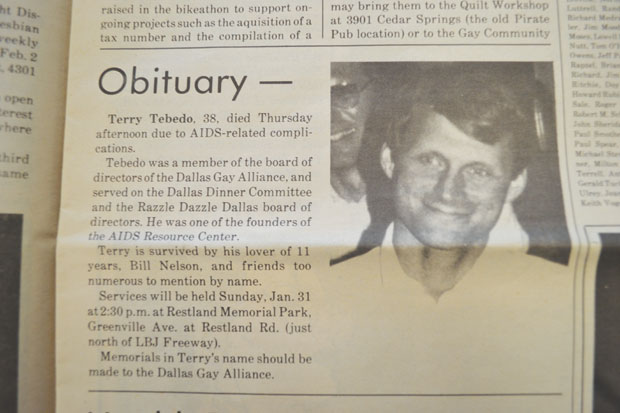 OBIT | Dallas Voice obituary for Terry Tebedo, one of the founders of DGLA and Resource Center, who died of AIDS in 1988. His TWT obituary can be found in TexasObituaryProject.org. Dallas Voice death notices will be added to the database once the paper is digitized.

For years, the obituaries of the thousands of LGBT Texans gathered dust in the yellowing pages of the community’s publications. Short write-ups, the eulogies offered a snapshot of the person’s life through a gay lens. Mainstream publications weren’t apt to publish the name of someone’s surviving same-sex partner, and they heavily edited the notices to remove the person’s gay soul.

Those obituaries are a chronicle of LGBT life, and J.D. Doyle of Houston is ensuring they will be permanently available to researchers or to anyone simply looking for a memory of a friend. The obituaries were usually submitted by friends rather than family, so they were more authentic and unfiltered. Over the past year,

Doyle has scanned almost 5,000 obituaries printed in Texas’ gay publications and compiled them into an online database titled the Texas Obituary Project.

Doyle has been active in Houston’s LGBT community for years and was recently named Grand Marshal of that city’s Pride parade in June. He said he creates a page for each obituary and then adds the name, cause of death, partner’s name, age, city and other items that identify the person such as their affiliation with Turtle Creek Chorale or Dallas Gay Alliance. For community leaders like Bill Nelson, Doyle scanned several news stories to complement the obituary and added them to the web page. Nelson was one of the founders of Dallas Gay Alliance and AIDS Resource Center, now Dallas Gay and Lesbian Alliance and Resource Center.

Most of the obituaries were published in This Week In Texas, a statewide weekly magazine published from 1975 to 2000. Doyle hopes to add obituaries printed in Dallas Voice, once the University of North Texas scans the issues and makes them available online. Dallas accounts for 1,154 of the obituaries Doyle has scanned

Bruce Monroe, a historian and a board member of The Dallas Way, called Doyle’s work “an amazing project.” 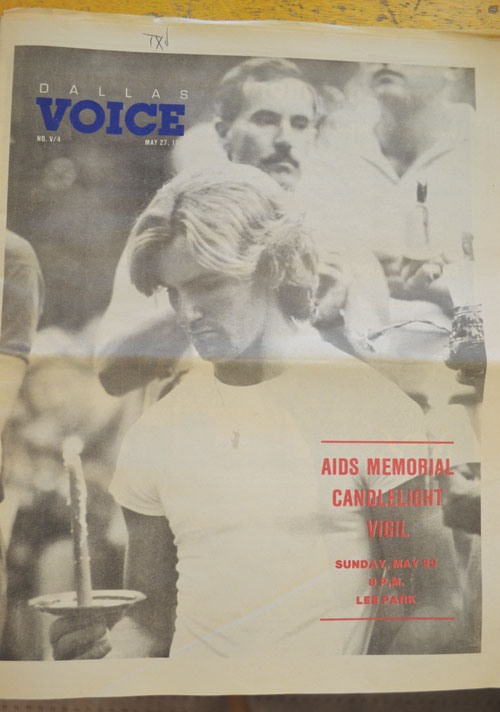 VIGIL | A 1988 Dallas Voice cover highlighted an AIDS candlelight memorial scheduled to be held that week in Lee Park.

“It helps connect the dots,” he said. “It’s a valuable resource to put together the genealogy of the gay community.”

Monroe said that when a friend approached him to find information about a former Cedar Springs retailer who died in the 1990s, he wasn’t able to find anything.

Then he found the Texas Obituary Project, typed in a few key words, and the obituary from TWT popped up with the information he was looking for.

The obituaries and related stories archived in the project paint the story of gay life a few decades ago. In a December 1982 issue of TWT, the top news story was

“Homosexuals in Texas fighting for their legality with the defeat of 21.06.” It was the year Judge Jerry Buchmeyer ruled the Texas sodomy law unconstitutional.

The No. 2 story in that issue was “AIDS Epidemic Sweeps Texas.” Four men in Houston and one in San Antonio had already died from the disease, according to the story. A Dallas death had occurred, but it happened after the TWT story was written.

The earliest Dallas death recorded in the Texas Obituary Project is Joe Philpot, owner of Sundance Kids, a leather bar located on Maple Avenue next to the Tollway in a building last occupied by The Brick. Developers recently demolished the building to make way for the Old Parkland office complex now under construction.
Philpot’s death was reported as nonspecific cerebral degradation. AIDS Arms medical director Gene Voskuhl said Philpot probably died of CMV, crypto-encephalitis, a disease doctors weren’t diagnosing in those early years.

A comment in one obituary also gives pause. The stigma of having AIDS and dying of it was heavy during the 1980s and 1990s, and the death announcements reflect it. The obituary of Charles Jarvis, 53, who died in 1985, noted he died “after a brief bout with cancer of the pancreas, and was not related to A.I.D.S. (sic) in any way.” Clearly, it was important to record that distinction.

More than half of the deaths listed in the archive are AIDS related. Doyle said many of the obituaries listed no cause of death, but he added the AIDS category if the suggested donation was to an AIDS agency or if a partner had AIDS listed as his cause of death.

Doyle also found another pattern while organizing the archive. He found 140 LGBT people had been murdered in Texas, 24 of them in Dallas. A number of victims were found stabbed or beaten to death in their homes. Others died from attacks on streets near the clubs. The most violent week occurred during Christmas 1981. TWT reported “a bloody holiday season across the Lone Star State,” noting John Sholl was stabbed to death on Dec. 26 on Throckmorton Street as he walked from Maple Avenue to Cedar Springs Road.

“In the two most populous homosexual communities in Texas, Dallas and Houston, there were three additional murders in only eight days,” TWT reported, and in College Station, “a young lad was nearly beaten to death and dumped on a country road.”

While the Texas Obituary Project contains thousands of notices, it’s still smaller than one sponsored by the San Francisco GLBT Historical Society and the Bay Area Reporter, San Francisco’s LGBT newspaper. Doyle said he was inspired by that project to begin his own. His focus is on the years from 1982 to 2000, although a few of the obituaries on the site date from 1976. He said that before the AIDS epidemic, TWT rarely printed a death notice. Dallas Voice, which began publication in 1984, early in the epidemic, quickly adopted a policy of printing obituaries for free.

Doyle encourages people to submit obituaries of people missing from the archive.

“There are lots of people whose obits weren’t in the gay publications,” he said.

Use the archive at TexasObituaryProject.org.