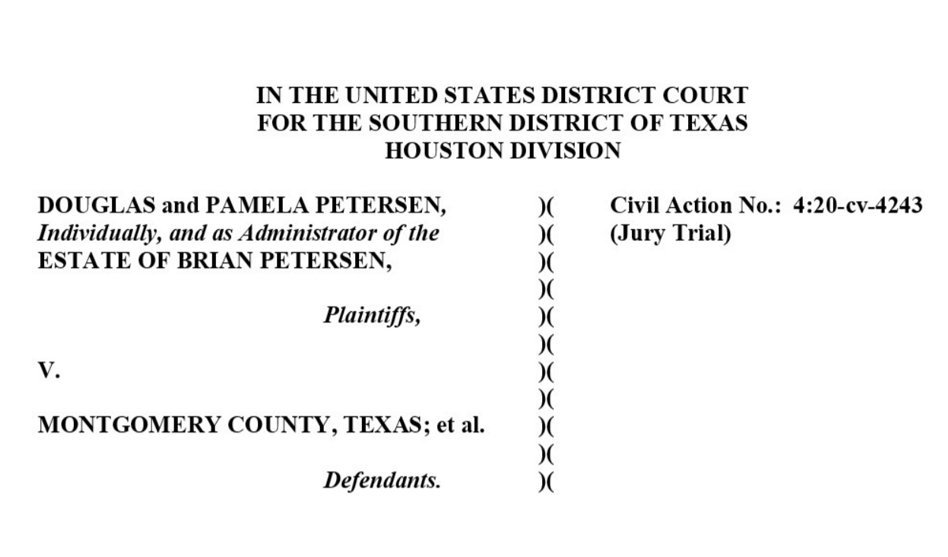 The parents of a Texas gay man caught in a sting operation supposedly targeting pedophiles said this week they are suing the city of Conroe, Montgomery County and others “for false arrest and malicious prosecution” after their son committed suicide. Defendants listed in the lawsuit are Montgomery County; Bridgitt Johnson, EMT; Wellpath Recovery Solutions LLC; Southwest Correctional Medical Group Inc.; the city of Conroe and Detective Darrick Terrail Dunn.

Dallas Voice has reached out to Montgomery County and the city of Conroe for comment. We will update this post as we receive their responses.

Attorney Randall L. Kallinen announced the lawsuit today (Monday, Aug. 2), saying in an email, “High school teacher Brian Petersen, 39, who had never been charged with a crime in his life, was falsely accused by Conroe police Detective Darrick Dunn of on-line solicitation of a minor after the adult Dunn left Brian a voice message in an adult-sounding voice on the legal gay dating site Grindr before Brian agreed to meet Dunn.”

Kallinen continued, “At the Montgomery County jail, Brian was not treated appropriately for potential suicide, and when let out of jail [he] promptly researched how to commit suicide, bought the materials to commit suicide and then committed suicide. Brian left a suicide note exposing how the Conroe police and Detective Dunn enticed him with Dunn’s adult voice to meet him.”

Kallinen says that a voice mail recording of Dunn leaving a message for Petersen — which Dunn recalled as saying “Hey, it’s Jason. What’s up? Just leaving a message so you can hear my voice” — that the attorney believes would be a crucial piece of evidence in the lawsuit is missing.

Kallinen included with his email photographs of Brian Petersen’s four-and-a-half-page, handwritten suicide note, addressed to “Friends & family.” In that note, Petersen acknowledged that he was gay and that he had been arrested for solicitation of a minor. “Even writing that makes me have to pause. But please, read on and hear me out one last time,” he wrote.

Petersen said he was “active on Grindr,” and that he connected with “mainly guys into hookups with ‘dad types.’ … Some of the guys I’ve met enjoy age play. It is not necessarily my thing but I’ve had a few fun encounters [with] obviously older Grindr users role-playing as younger guys. Once I can draw them out, we can role-play as consenting adults.”

He then continues by explaining how, as a teacher, he is familiar with the mannerisms and speech patterns of teenagers, and by pointing out the signs that he said made it obvious to him he was dealing with an adult and not a teenager. “I won’t go through everything, but law enforcement is very, very bad at pretending to be be teens,” he wrote. “They look and sound like exactly what they are: adults pretending.

“I am deeply angry at law enforcement as they destroyed me and gave me no other solutions,” Petersen’s note continued, as he offered a list of ways he could tell he was not actually talking to a teenager and then suggested his family pass those tips along to police. He said although he felt confident that he would have won in court, “it is irrelevant. This is the type of accusation that destroys a career and a life, no matter the outcome. I cannot live the rest of my life getting a doubting eye every time I talk to a kid near me. I will not spend the rest of my life barely surviving after losing everything. So, I choose oblivion.”

The note then continues with personal messages to several specific family members, and ends with, “I wish I had more time to spend with all of you, but Montgomery County law enforcement had different ideas.”