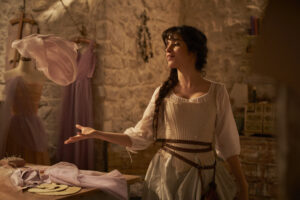 Amazon Prime Video dropped its trailer today for Cinderella with singer Camila Cabello playing the titular character. But this is definitely no live-action Disney version. Think more Baz Luhrmann (Moulin Rouge, William Shakespeare’s Romeo + Juliet) with his use of modern songs against a traditional story. The trailer comes out a month to the day before the movie premiere.

Director Kay Cannon (Pitch Perfect), transforms the story into a modern musical and what appears to be a slightly more empowered Cinderella than we’re used to — at least based on the trailer.

The all-star cast includes Idina Menzel, Minnie Driver, James Corden, Nicholas Galitzine and Pierce Brosnan. But come on. You know we all want to see Emmy- and Tony-winning Billie Porter as the film’s “fabulous godmother.”