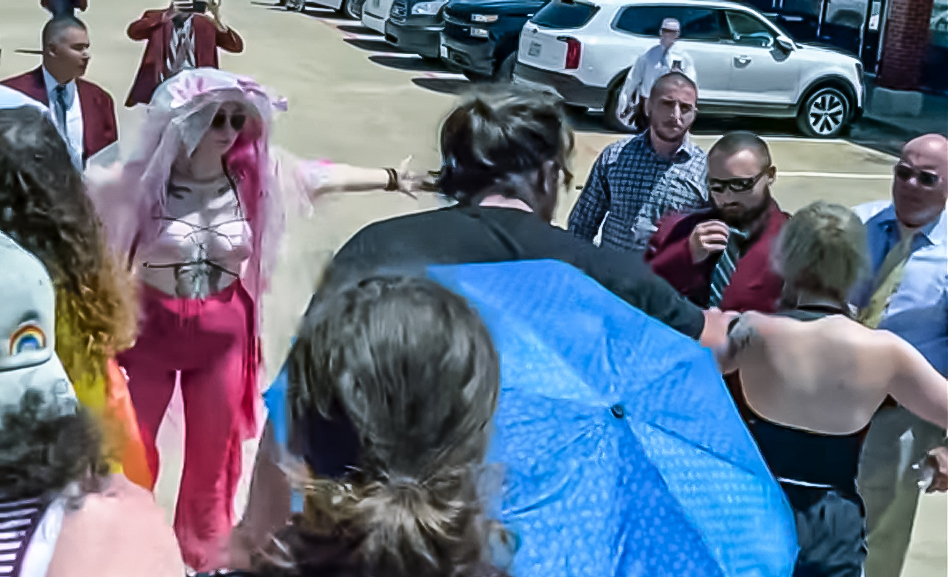 This screen capture from a video on the No Hate in Texas Facebook page shows a woman in pink pants with a light-colored hat standing with her back to church members and her arms spread wide to create a barrier between church members and protesters. Shortly after, the woman moves to stand in front of the man seen here on the right side of the image in the dark red suit jacket, striped tie and sunglasses. The woman in pink again stands with her back to the church members and her arms outstretched until the man in the sunglasses, red jacket and striped tie steps forward and shoves her in the back. The man was reportedly cited for assault.

Stedfast Baptist Church has been back in the headlines the last couple of weeks after a video was posted online of a sermon by Stedfast preacher Dillon Awes in which he declares that every LGBTQ person should be “lined up against the wall and shot in the back of the head” because  “That’s what God teaches. That’s what the Bible says.”

And today (Sunday, June 12), at least one Stedfast member has been cited by police in Watauga after shoving a protester outside the church. A source tells Dallas Voice the church member cited for assault was Ryan Urbanek.

Stedfast Baptist, led by pastor Jonathan Shelley, is now located in a strip center on the Old Denton Highway in Watauga after being evicted from its former location in Hurst. A group called No Hate Hurst had protested regularly on the sidewalk across from the Hurst location, and when the church moved to Watauga, the group changed its name to No Hate Texas and continued its protests.

Today was the first time there has been any kind of physical contact between church members and protesters as far as we know.

Video posted to the No Hate in Texas Facebook page shows about 10 church members facing off in the parking lot with a slightly larger group of protesters, one of whom was shouting slogans and curse words at the church members through a megaphone. At least one of the church members is carrying a clearly visible handgun in a holster on his right side.

Early on in the video, two protesters are standing silently between the two groups, their arms outstretched. One of them, dressed in pink, moves to stand between her group and a church member who had stepped closer; she is standing with her back to the church members, her arms outstretched, when a man in a dark red suit jacket steps up and shoves her in the back. She turns to confront the man but is pulled away by other protesters.

Another post on the No Hate in Texas Facebook page is asking for others who were there and have video of the confrontation to send it to the group because “We are pressing charges and appreciate all the different angles for proof of them being the aggressors.”

Stedfast Baptist Church has been in Fort Worth since 2014 when founding pastor Donnie Romero, who moved to Fort Worth from Arizona, called for LGBTQ people to be killed, declaring, “I’m not going to let these dirty faggots in my church. They are all pedophiles.”

At that point, the church’s address was listed as a small residence on True Avenue in the northwest area of Fort Worth.

By 2016, the church was meeting in a space in a shopping strip on the Jacksboro Highway in Sansom Park, a small town on the northwest edge of Fort Worth, inside the Highway 820 loop. In June that year, five days after a gunman massacred 49 people inside the Orlando LGBTQ nightclub Pulse, Romero posted a sermon on YouTube in which he said those murdered at Pulse deserved to die and that he was praying the survivors would die, too.

““These 50 sodomites are all perverts and pedophiles,” Romero said in his video. “They’re the scum of the earth, and the earth is a better place now, and I’ll take it a step further. … I’ll pray to God like I did this morning, and I will again tonight, that God will finish the job that that man started.”

In January 2019, Romero resigned as pastor of Stedfast Baptist after being caught gambling, using drugs and sleeping with prostitutes. Jonathan Shelley took over as pastor and continued the hate. By the summer of 2021, Stedfast had moved to a new space in a shopping strip in Hurst, and Shelley was posting his own videod sermons calling for LGBTQ people to be shot in the head. That is when the No Hate in Hurst group was formed and begin staging non-confrontational protests on the sidewalk across the street from the church’s meeting place.

Stedfast Baptist was evicted from the Hurst location in February this year after the property owner told a judge Shelley’s and Awes’ sermons calling for LGBTQ to be killed violated the terms of their lease, which prohibited threats and violence.

The church currently meets in space in a shopping strip at 6900 Denton Highway in Watauga. That property is owned by Cider Property Inc., based in Dallas.