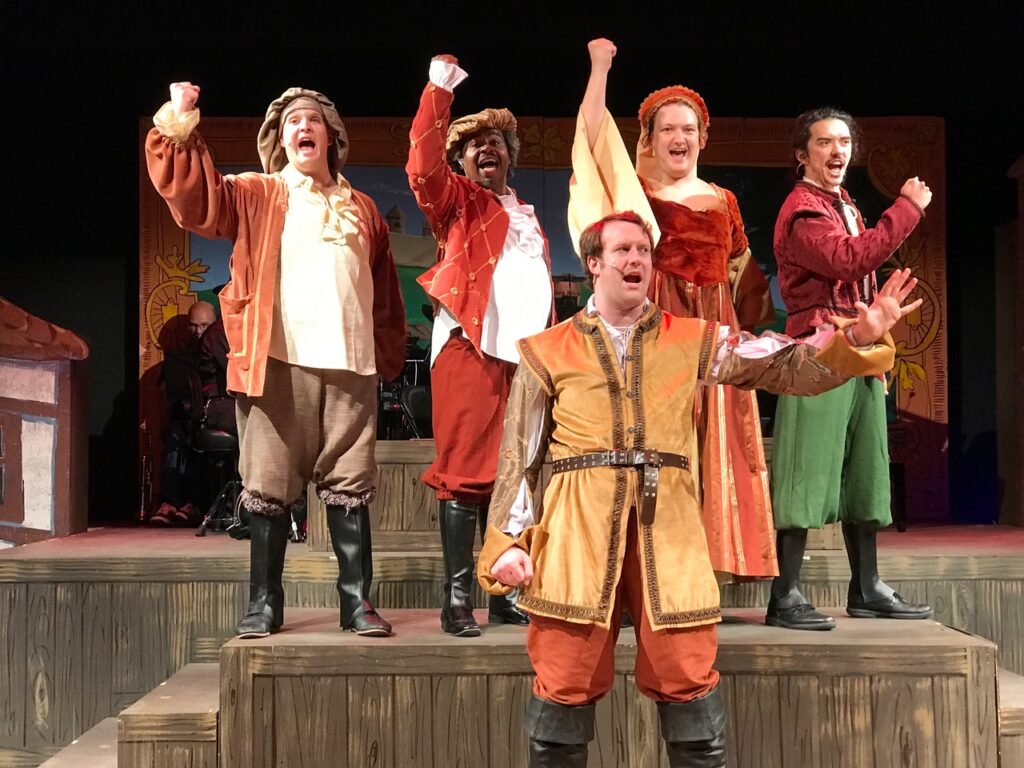 One might not expect a community theater production to be one hot ticket, but that’s the case in Theatre Frisco’s Something Rotten! The show opened last Friday for a three-week run and before its first curtain, the entire run had already sold out. For upcoming audiences, they are in for a hell of a funny time.

Directed by Neale Whitmore, his last show for Theatre Frisco after 36 years of directing en tote, the show’s compact black box setting worked quite well for the story. The musical filled up every space it could primarily with its large cast. The show even extended into the audience displacing one member in and out of her seat.

The story centers Nick (Sterling Beard) and Nigel Bottom (Nathan May), playwrights who live in the shadow of their rock star contemporary William Shakespeare (Anthony Holmes). As they try to come up with a hit show, Nick enlists the help of Nostradamus (Alex Rain) to foretell what he should write. Meanwhile, Nick’s wife Bea (Samantha Snow) masquerades as a man to earn money while the brothers figure out their plan.

Whitmore directed a tight show that kept the show’s energy high. Additionally, Emily Leekha’s choreography was quite spectacular in the space and she was clearly working with a talented team actors/dancers who nailed her steps. M. Shane Hurst’s music direction accompanied the show effectively but sometimes played over the cast — most notably in Holmes’ numbers — but the onstage orchestra got the Renaissance sounds right mixed in with the occasional rock number.

As Nick Bottom, Beard was somewhat of an anomaly. His performance was solid and he had a strong singing voice, but he wasn’t the most facially emotive which didn’t lend always itself to his character’s exasperated personality. May radiated Nigel’s earnest demeanor as Nick’s younger brother but also gave him a resolute strength. Holmes oozed charisma as the celebrity Will Shakespeare but oftentimes resorted to a falsetto voice which became a distraction. The three actors all had incredible singing voices, but Snow and Rae Hilman as Portia were outstanding and belted out some heavy duty vocal runs and both brought a lovely levity and romance to counteract the Bottoms’ perpetual dismay. As Brother Jeremiah, Portia’s father, Doug Fowler brought sassy judgment to his puritanical role that had some amusing closeted undertones.

With all that said, Something Rotten! was still a lively and hilarious romp from beginning to end. The show has a lot of innuendo that thankfully this community theater didn’t shy away from. And the audience ate it up with laughter and applause.

The show runs through Aug. 14.

Individual tickets to all performances are now on sale at TDO. Seats can be secured now for Verdi’s Rigoletto, Humperdinck’s Hansel and Gretel, Wagner’s Das Rheingold, and Mozart’s Così fan tutte.

TDO is also offering 25 percent off tickets through April 10. Order online here and enter the promo code OPERADATE for the discount through Wednesday. 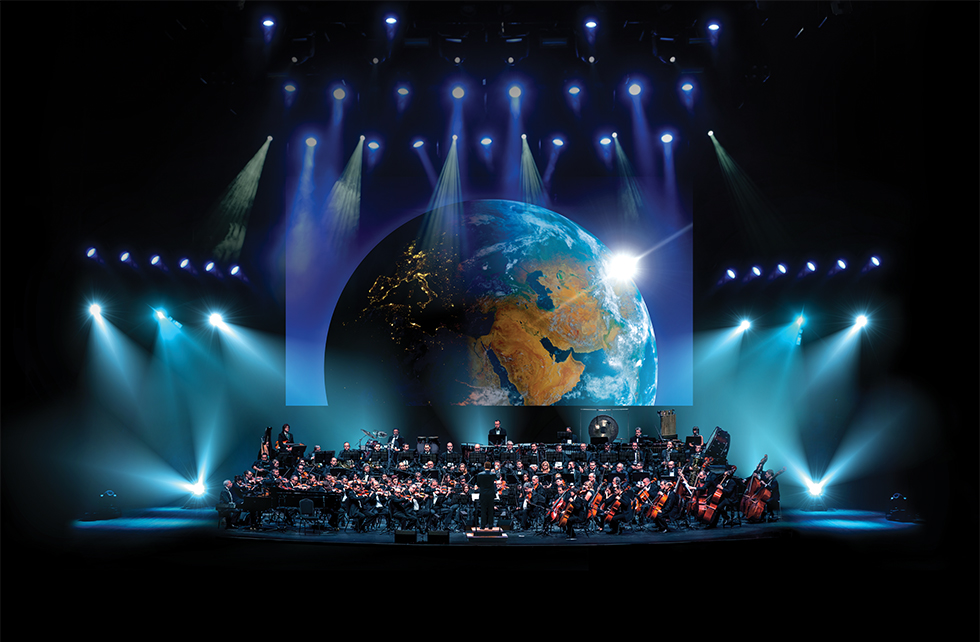 Performing Arts Fort Worth, the nonprofit owner and operator of Bass Performance Hall, announced on Monday its 2022-2023 lineup for the BNSF Popular Entertainment Series. The lineup features a return of audience favorites,  a variety of musical showcases and more.

“We are so excited for this jam-packed Popular Entertainment Series,” Performing Arts Fort Worth President and CEO Dione Kennedy said in a press release. “This 2022-2023 Series hosts longtime friends of the Hall and welcomes new acts sure to inspire and entertain audiences. We can’t think of a better way to celebrate 25 years of Bass Performance Hall than with this incredible lineup.”

Ticket sales open Friday at 10 a.m. here. All shows at Bass Hall unless otherwise noted. The 2022/23 series includes the following:

Nov. 18: An Evening with Slaid Cleaves in the McDavid Studio.

Nov. 21 and 22: Rudolph the Red-Nosed Reindeer: The Musical.

Dec. 2: Holidays with the One O’Clock Lab Band in the McDavid Studio.

May 5: One O’Clock Lab Band Spring Showcase in the McDavid Studio.

The virtual theater team teased its new season on its socials last week with hints to its upcoming shows. The company finally revealed its new season that includes seven virtual performances for its sixth season. The theater approaches its production in a unique way that is open to everyone.

“What if you could perform without the hustle of auditions, the stress of rehearsal schedules and the choices of a director?” the theater asks.

Thus, the company has created a global community of professional performers that stemmed from its response to COVID. The company states that it casts its virutal shows blind to age, race and gender.

Being a virtual series, dates are fluid. Visit the company’s website for performance dates, auditions and more information. 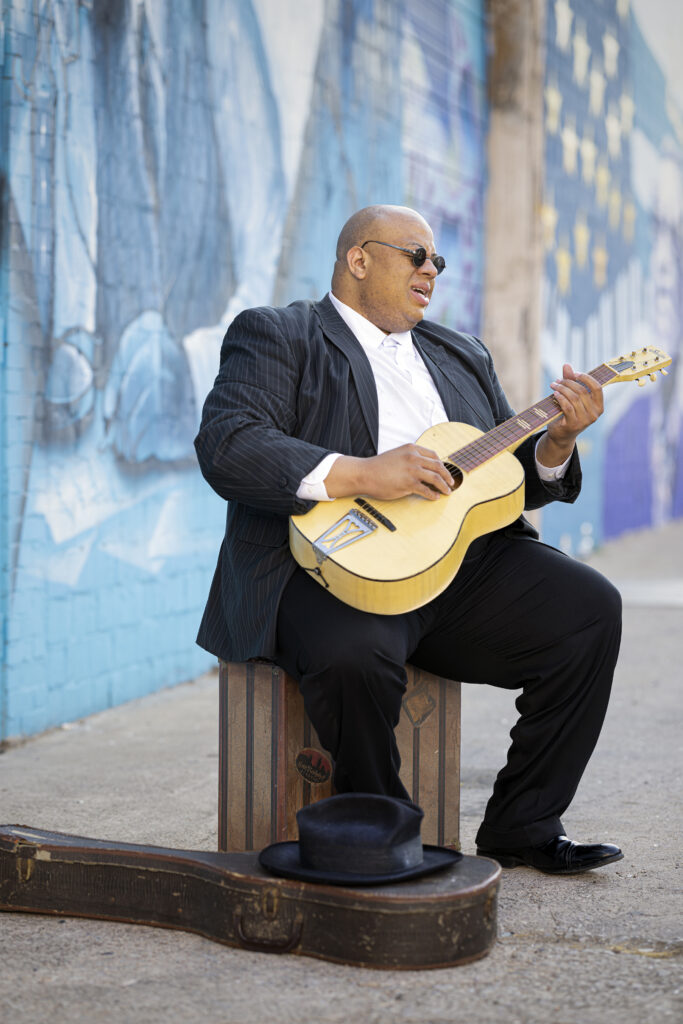 Undermain Theatre will open Akin Babatundé and Alan Govenar’s solo-performer meditation on the life and songs of Blind Lemon Jefferson on Sept. 1-18. The show originally premiered in 2018 at The York Theatre which was directed by Undermain’s founding artistic director Katherine Owens and starring Babatundé. The theater brings Blind Lemon back to Deep Ellum this fall with J. Dontray Davis as the legendary musician.

Discovered on a street corner in the Deep Ellum section of Dallas in 1925, Jefferson made more than 80 records over the next four years, becoming one the most prolific and influential performers of his generation and propelling the growth of rhythm and blues, soul, doo-wop, rap, and hip-hop.

Building on the success of their earlier musical Blind Lemon Blues, presented by the York Theatre in New York City in 2007 and 2009, Alan Govenar and Akin Babatundé have used new research to probe deeper into the life and psyche of Blind Lemon Jefferson.

Davis plays more than 10 different roles, channeling the spirits of men and women alike, in a journey that is at once evocative, troubling, and transformative. Songs and monologues bring to life the voice of Blind Lemon Jefferson, his community, and his musical contemporaries, including Blind Willie Johnson, Lillian Glinn, Hattie Hudson, Bobbie Cadillac, and Lead Belly – all coming together in Jefferson’s mind on the day of his death, December 19, 1929, in Chicago.

Babatundé directs the show with choreography by Danielle Georgiou who recently announced her stepping down from the Undermain. The creative team includes scenic designer Robert Winn, lighting by Steve Woods and costume designer Amanda Capshaw. Tickets are available here. 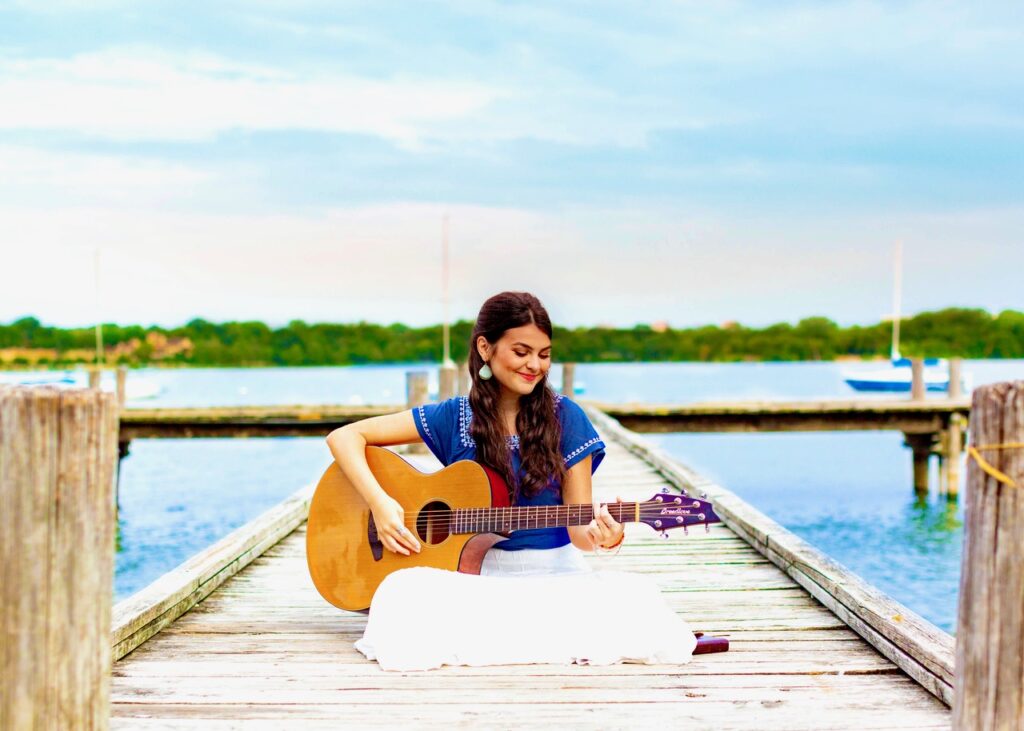 Lyric Stage will open its 29th season with the musical Mamma Mia! opening Aug. 24-28 at the Majestic Theatre featuring songs by ABBA.

The production will be directed by Lyric Stage executive artistic director Christopher J. Deaton and choreographed by Kelly McCain. Vonda K. Bowling will serves as music director, Bruce Greer as musical supervisor. The creative crew will include Scott Guenther on lighting, Jorge Guerra on sound design and engineering and costume designs by Megan A. Liles. Producers are Catherine Carpenter Cox and Deaton.

Mamma Mia! tells the story of Sophie, a young woman in search of her birth father on the eve of her wedding. Sophie’s quest to discover the identity of her father brings chaos, love, laughter — plus a lot of singing & dancing — to their sunny Greek island, as well as the unexpected twenty-year reunion of three men from her mother’s past.

With Music & Lyrics by Benny Andersson & Björn Ulvaeus, and some songs with Stig Anderson, all of ABBA fame, Mamma Mia! has a Book by Catherine Johnson and was Originally Conceived by Judy Cramer. 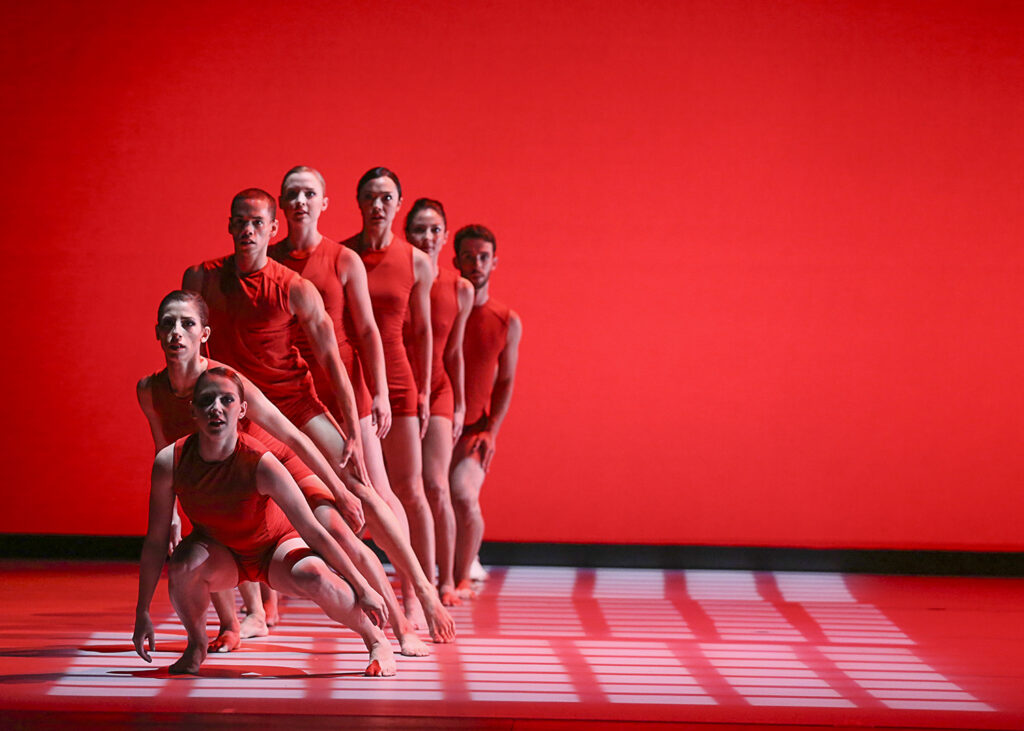 Bruce Wood Dance returns to its roots with Homecoming, on Sept. 17 , September 17 at Fort Worth’s W.E. Scott Theatre. The company began in Cowtown under Wood’s leadership. The show will feature two of Wood’s pieces as well as excerpts from artistic director Joy Bollinger’s Slip Zone.

“Bruce Wood Dance is thrilled to come home to Fort Worth, where the company originally resided—especially to bring back two works that Bruce created during our time in Cowtown—RED and Lovett!,” Bollinger said in a press release.

Intensely riveting, Wood’s RED keeps audiences on the edge of their seats. Flickering between emotions both tightly coiled and explosive, RED takes you on a heart–pounding journey into human fortitude. RED premiered at Fort Worth’s Bass Hall in 2001, immediately topping the list of his most esteemed and iconic works. Completed days before the events of 9/11, viewers of its debut drew an immediate correlation between the themes presented in RED and the state of our nation—as though in the creation process, Wood could foresee the need to unite and heal on a grand scale. Wood said, “The dancers and I knew we had created a dance for our time without even knowing it. That is the nature of art.”

Originally commissioned by Dallas Museum of Art, Slip Zone delves deep into the imaginations of the post–war abstract expressionists featured in its exhibition, “Slip Zone: A New Look at Postwar Abstraction in the Americas and East Asia.”

Finally, Bruce Wood’s beloved Texas tribute, Lovett!, brings the evening to a rousing close. The most frequently requested dance in his repertoire, this perennial crowd–pleaser has delighted fans since its premiere at Bass Hall in 2000. Set to the toe–tapping music of legendary Texan singer–songwriter Lyle Lovett, Lovett! celebrates Wood’s enduring love for his home state. Wood allows us to peek into a lesser–known aspect of his life as he puts a lighthearted and humorous spin on his experiences working on ranches, raising horses, roping cattle, and rodeo riding.

Reserved seating. Tickets are $45 at brucewooddance_homecoming.eventbrite.com. Student and senior rush tickets are available for $15 at the door 90 minutes before the show begins.

Tickets are available now with student and senior rush tickets at $15. 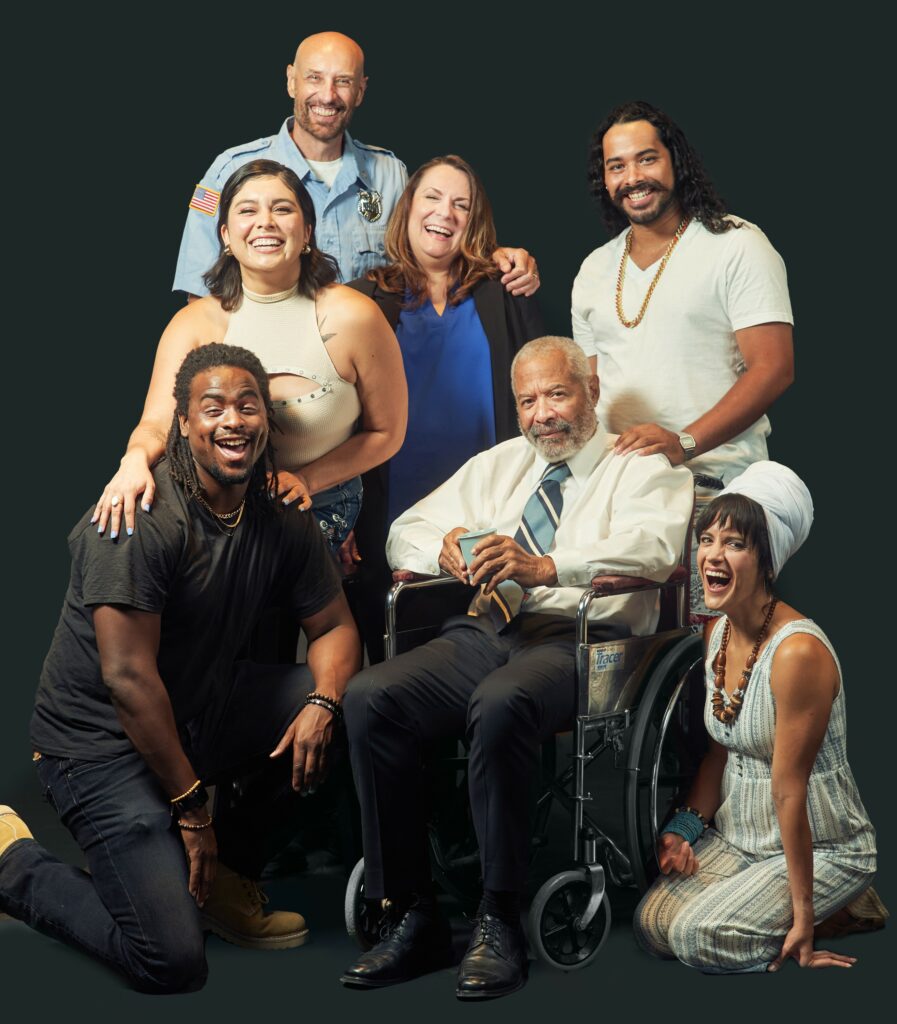 The cast of ‘Between Riverside and Crazy’ at Stage West. (Courtesy photo)

Stage West will open its four-week regional premiere of Between Riverside and Crazy on Aug. 18-Sept. 11. The play will be directed by Ruben Carrazana with the cast including Tyrees Allen, who played this role for Boston’s SpeakEasy Stage Company in 2018 and who was previously seen at Stage West in Lips Together, Teeth Apart, Fences and Driving Miss Daisy. The cast also features Merri Brewer,  Jim Jorgensen and making their Stage West debuts are Irwin Daye, Hannah Valdovinos, Tomas Moquete and Vanessa DeSilvio.

Widowed ex-NYPD officer Walter “Pops” Washington is under a lot of pressure. What with a long-running lawsuit, a landlord who wants him out, and a motley extended family, he’s about at wits’ end. Is it possible to find a way through so much life debris and keep your sanity? That’s the question addressed in Stephen Adly Guirgis’s brilliant Pulitzer Prize winner Between Riverside and Crazy.

Rover Dramawerks: The Underpants, today-Aug. 20 at the Cox Playhouse.

Hip Pocket Theatre: When We Were Very Young, Friday-Aug. 21.

The Firehouse Theatre: Spongebob the Musical, through Aug. 6.

Broadway Dallas: Disney’s Frozen, through Aug. 7 at the Music Hall at Fair Park.

Junior Players: As You Like It, through Aug. 7 at Samuell-Grand Park.

The Hopeful Theater Project: The Drowsy Chaperone,  through Aug. 7 at Mainstage222.

Theatre Frisco: Something Rotten, through Aug. 14.