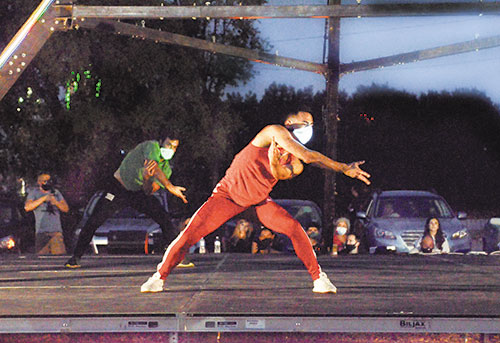 Bruce Wood Dance was one of three groups to perform at the inauguration of the Tin Star Theater, an outdoor, car-based performance space. (Photo courtesy of Brian Guilliaux)

The pandemic has affected everyone in all sectors, but in North Texas and elsewhere, the cost to the artistic and cultural communities has been staggering. Last week, a survey conducted through the Dallas Arts District and other nonprofits reported tremendous losses: Nearly $70 million from the shutdown in mid-March until the end of July (when the survey was conducted), doubling the toll from a prior survey that ended May 31.

“All of these organizations are just struggling to hold on,” says Terry D. Loftis, who runs the arts-funding organization TACA, which distributed more than half a million in emergency relief to 70 arts organizations. Jobs have been lost. Salaries slashed. Foot-traffic drastically curtailed.

But slowly, the city is seeing that there is a light at the end of the tunnel. 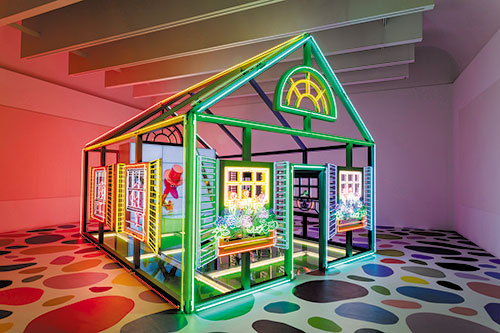 The impressive For a Dreamer of Houses exhibit at the DMA finally gets a public showing.

“You know, we closed on March 14 and opened again on Aug. 14, so we were closed exactly five months,” says Agustin Arteaga, executive director of the Dallas Museum of Art. One of the shows at the DMA right now, the massive and colorful For the Dreamer of Houses, has literally remained overlooked since its opening: The preview was March 12; two days later, the museum closed. But it’s still there, inviting locals to explore it. (Reservations are required and patrons are given a two-hour window to visit.)

It’s all still a work in progress. The DMA, the Dallas Holocaust and Human Rights Museum and Nasher Sculpture Center all opened their doors last month; the Sixth Floor Museum and Crow Museum of Asian Art are set to welcome the public on Sept. 9 and Sept. 18, respectively. (The Perot Museum of Nature and Science — which in June had been one of the first venues to announce reopening plans in July that eventually fell through — is set to open later in the fall, though no exact date has been revealed.)

But these baby steps come at a time when they are much needed. 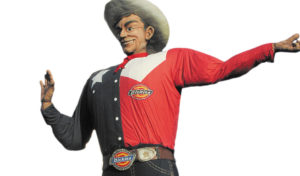 Perhaps the most encouraging sign that we are all adjusting to the new normal arrives thanks to the DMA, which has just opened its first new exhibit, a portmanteau collection of more than 20 recent acquisitions (within the last two years) called Contemporary Art + Design.

Although a version of the exhibit had been planned before the shutdown, DMA curator Sarah Schleuning notes that it grew and transformed as a result of having more time to think about the role of the museum in the life of the city. A second exhibit, set to debut later this month, was created entirely since shutdown.
“All 12 curators worked together and asked, ‘What [works in our respective collections] can cross over?’ Even though the art didn’t change, our perceptions of it did,” Schleuning says. “We have done groupings to let the [pieces] speak to each other.”

And although the State Fair of Texas as we know it will officially not take place in 2020, organizers have announced a new drive-thru concept that will allow 50,000 cars to picnic while socially-distancing inside the fairgrounds, munching on fair food and even getting their photos taken with a mask-wearing Big Tex. While that is a fraction of the millions who stream through in a typical year, a corny dog and heartfelt “Howdy, folks!” may be the surest signs of life fighting back in North Texas.