The show must go on

Mark Hamill returns as Luke Skywalker, above, in ‘Last Jedi;’ Hugh Jackman dazzles as ‘The Greatest Showman.’ below

‘The Last Jedi’ stumbles, but only a little; being a sucker for ‘The Greatest Showman’

A friend of mine — a huge Star Wars fan — mildly griped that while he liked the last film in the series’ canon, The Force Awakens, he found it basically a remake of the one that started it all, now called Episode IV: A New Hope. Assuming he’s right, then the latest entry, Star Wars Episode VIII: The Last Jedi could probably be characterized as a remake of The Empire Strikes Back, with bits of The Return of the Jedi thrown in. There’s the Big Reveal about the parentage of the young proto-padewan Rey (Daisy Ridley), a Jedi training sequence on a remote and mystical planet, with Luke Skywalker (Mark Hamill) serving as Yoda; the conflict within the Darth Vader heir, Kylo Ren (Adam Driver); the confrontation with the wrinkled Supreme Leader (Andy Serkis), even a Lando-ish vagabond (Benicio del Toro) who may or may not be trustworthy.

And yet, while The Last Jedi is longer than any other Star Wars movie by a good 10 minutes (and half an hour longer than the original), amazingly, not all that much seems to happen. There are fewer action sequences, and certainly fewer lightsaber battles (the swashbuckling signature of the series) than probably any previous entry. New characters are introduced or expanded while old ones are managed. There’s more humor, but less charm.

Nonetheless, only a blackguard would poo-poo on this continuation of the most satisfying movie serial of all time, an epic space opera of good-versus-evil tropes and eye-catching visuals that, for 40 amazing years, has swept us along with its soaring emotional rawness.

It’s all but impossible to watch The Last Jedi and not be cued to choke up, seeing the late Carrie Fisher, erstwhile kittenish spank-bank fodder, age into the elder statesman of the Rebellion, or ruminate on how Hamill is now older than Alec Guinness was when he first played Obi-Wan Kenobi. There’s a history here, one that writer-director Rian Johnson seems fully aware of and which he revisits in several touching moments. Still, its derivative underpinnings and over-full structure (too many McGuffins, too many villains to hiss at) serve as distractions.

The Last Jedi doesn’t have the heart-racing thrill that we got two years ago when The Force Awakens reunited the original cast with the new generation. But that John Williams fanfare, those silly star-wipes, the archly fascist iconography? Well, that’s all enough to fuel the 12-year-old in all of us. Who needs perfection when the Force is around us? 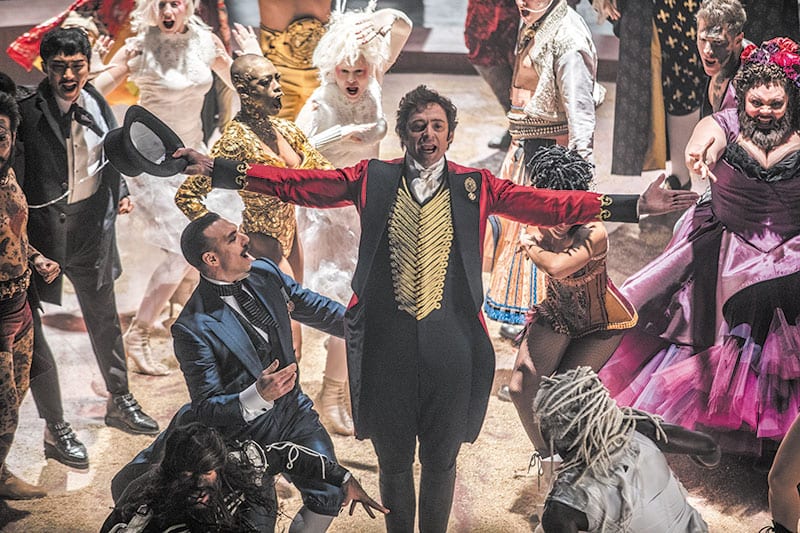 If you want the thrill of a new film discovery akin to previous Star Wars episodes, you couldn’t do much better than The Greatest Showman. I confess going into this film without many expectations: A biopic about P.T. Barnum (Hugh Jackman), who arguably invented not only the modern circus, but the entire idea that any publicity is good publicity, and that if you give the people what they want — to be amazed — the truth can always take a backseat. I imagined how it would play out, with rags-to-riches predictability, megalomania that torpedoes his personal relationships, confidence when the naysayers shot him down on his way to eventually immortality.

That’s exactly how the plot shakes out.

But what surprised, delighted and thrilled me was the way it was told. This is a newfangled musical of the highest order — colorful, exciting, chock full of terrific songs and eye-popping choreography. I just loved it.

It’s not often you feel the desire to get all gooey-lovey-dovey about a movie, but if you’re going to, a musical is the way to go. The songs are by Justin Paul and Benj Pasek, the duo responsible for the lyrics to last year’s La La Land as well as the Tony darling Dear Evan Hansen, and they are infectiously fun as well as emotionally rich and plot-driving. You leave the moviehouse with a whistle in your head and a skip in your step.

A lot of that falls in the lap of Hugh Jackman. Jackman is probably the only legit movie star today who is perfectly at ease in the flamboyantly open-hearted genre of song-and-dance musicals. He’s got the chops: A Tony for The Boy from Oz, a Oscar nomination for Les Miz; his big break was on the London stage playing Curly in Oklahoma. He’s talented and guileless, and he doesn’t so much show off as embody the musicality of his character. From the first shot — his silhouette in a dramatic pose, with the score grabbing you with its first notes — the director, newcomer Michael Gracey, projects his aesthetic: Let the showmanship speak for itself. Unlike La La Land — a kind of post-modern take on the nouvelle vague movie musicals of Jacques Demy, populated with capable actors who sing and dance, but who aren’t really “singer-dancers” — The Greatest Showman luxuriates in its widescreen showboating and frenetic editing. It’s much closer in tone to Moulin Rouge, or even the winsome, animated musical Sing!, than La La Land or Chicago.  It wears its heart on its sleeve.

But for all the credit rightly heaped on Jackman, the rest of the cast sells this show. The “freaks” in Barnum’s show are mostly in the background, but impressively developed as individuals, especially the stupendous Keala Settle as the Bearded Lady. Michelle Williams not only sings like an angel, she transitions flawlessly from happily poor helpmate to patrician, sad rich wife. Zac Efron, who has his own legitimacy with musicals, plays Barnum’s business partner; theirs number set in a bar, where Jackman convinces Efron to join him in this fantastical enterprise, is a brilliantly staged and edited sequence. (One of the film’s editors, Tom Cross, also did La La Land.) And Rebecca Ferguson as the “Swedish nightingale” Jenny Lind wows you in her introductory number.

The song she sings, of course, isn’t from the canon of 19th century coloratura, but a contemporary, elaborately orchestrated number — the kind Celine Dion might open a show with today, not an opera star from 150 years ago. But that fits in with the Baz Luhrmann-esque ethos of the movie. It speaks in modern idioms to adequately convey the experience of an age long past.

Indeed, the legacy of Barnum is at its lowest ebb ever; the show he created, which became the Ringling Bros./Barnum & Bailey Circus, shuttered its tent forever earlier this year, its treatment of animals seen as incompatible with 21st century progressivity. But The Greatest Showman doesn’t occupy itself with such social hot potatoes. Instead, it concentrates on the celebratory nature of humankind’s diversity, the groundbreaking development of entertainment. Maybe I’m a sucker, but that enchants me.