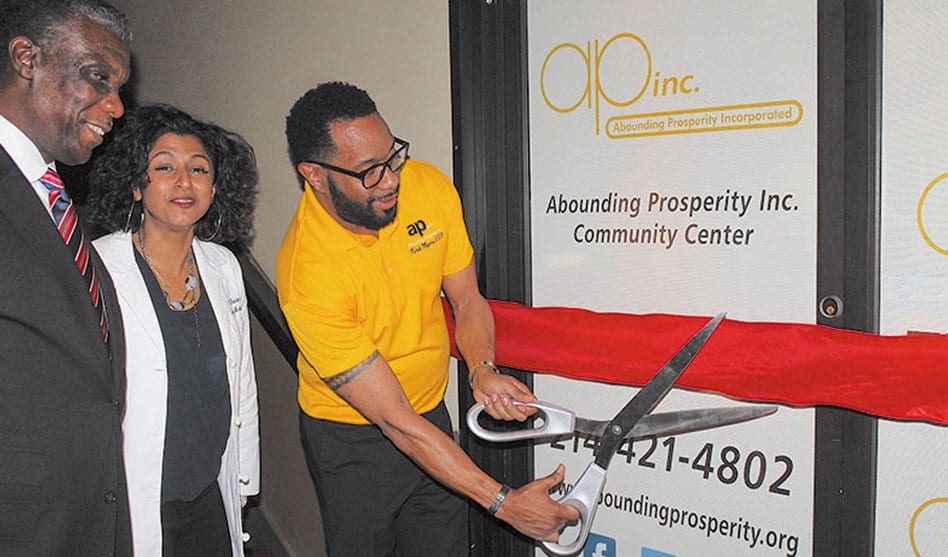 An arson fire on July 7 helped set Abounding Prosperity on a new course. On World AIDS Day, the South Dallas AIDS organization opened a “bridge clinic” that will help its clients get into treatment faster than ever.

But most importantly, Myers walked new clients across the street to Peabody Clinic to introduce them to the medical staff and get his clients into care.

Services expanded and Abounding Prosperity rented a second building a few blocks away on Martin Luther King Jr. Boulevard. The agency then began working with additional doctors and clinics across the city and won large grants recognizing the success of its work.

But the fire was a game-changer for the organization.

Although video taken by cameras at Peabody Clinic showed a man pouring gasoline on and around the building — and on himself, briefly catching his clothes on fire — police have not yet apprehended the arsonist, nor have they determined a motive. Sure, this may have been an anti-gay or anti-HIV hate crime, but police theorized the suspect actually got the wrong building and that his intended target was a house a few blocks away.

After the fire, AP quickly found and rented a space in an historic building on MLK Jr. Boulevard, just a few blocks from the remaining office. They renovated the space in time to cut the ribbon on the new facility on Dec. 1 — World AIDS Day.

Since the fire, not only has Abounding Prosperity relocated its community center, Prism Health has relocated its Peabody Clinic as well.

The new South Dallas Clinic, at 4922 Spring Ave. off Dolphin Road, is in a facility formerly occupied by Children’s Health.

Prism Health’s Tori Hobbs said renovating Peabody would have required completely rebuilding the facility from the ground up. The new location only needed a retrofit with new exam tables, computers and updated equipment.

Although the new building isn’t that much bigger than the old facility, the layout and patient flow is improved compared to the previous clinic space.

“We can see twice as many patients,” Hobbs said.

The new South Dallas Clinic has confidential office space, on-site behavioral healthcare and facilities to do research trials. Until the move, Peabody patients had to go to the Oak Cliff Clinic to participate in drug and other trials and for counseling care.

Because of the additional space, patients can usually be seen the same day they call for appointments.