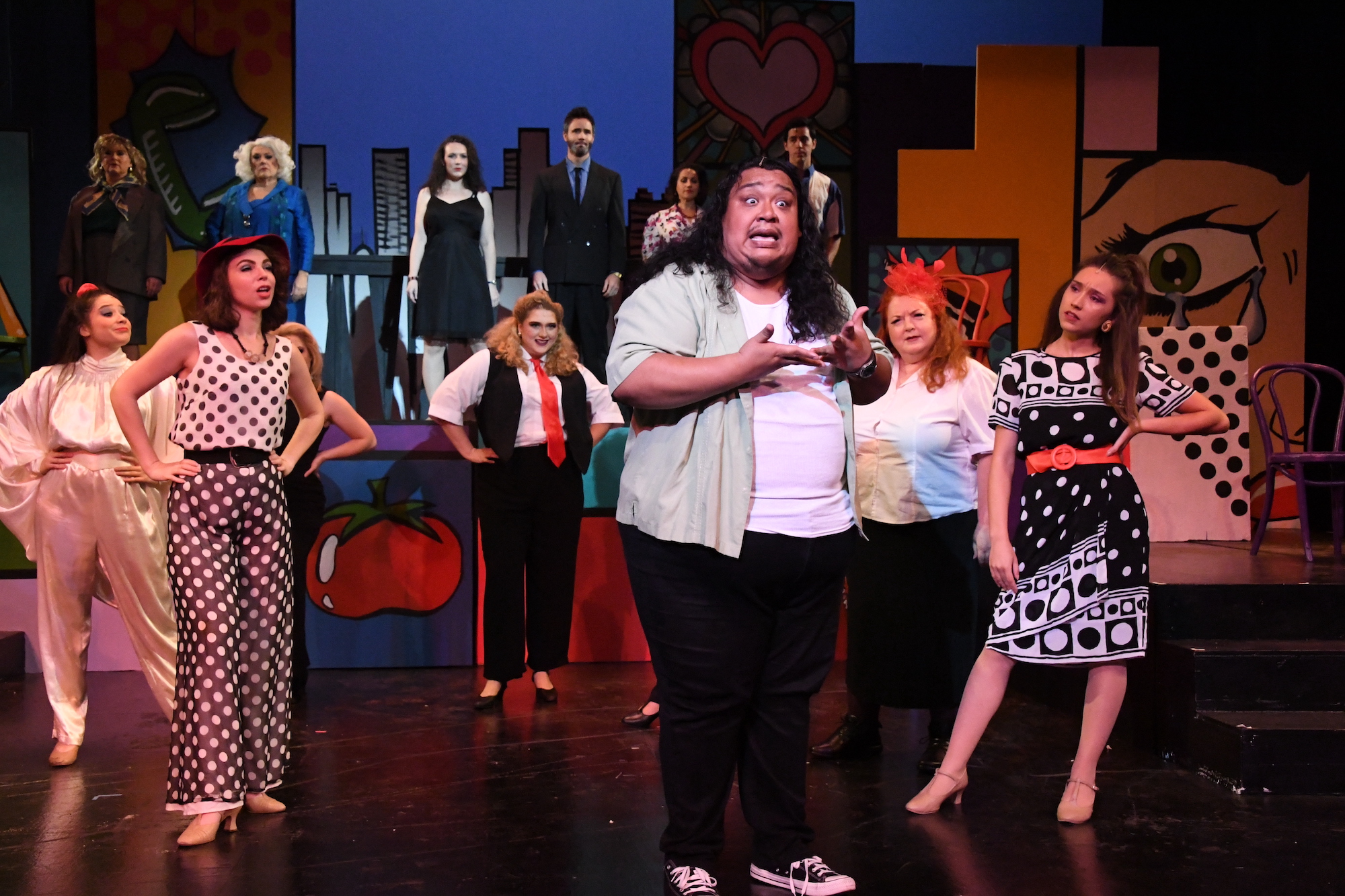 The cast of MainStage’s ‘Women on the Verge of a Nervous Breakdown.’ (Photo by Kris Ikejiri via Facebook)

A strange bunch of fabulous Women at Mainstage ILC

Women on the Verge of  a Nervous Breakdown was such an odd musical and yet completely charming. The songs aren’t quite your typical showtunes and the story, based on the Pedro Almodovar film of the same name, doesn’t have the highest stakes. But director BJ Cleveland, music director Kelley Poche Rodriguez and the cast created a quirky glimpse into 1980s Madrid.

The show makes a colorful impressions with Wendy Searcy-Woode’s artful Lichtenstein-esque set of panels that reveal element of the story but also works as entrances and platforms that look out toward a distant skyline of buildings.

Primarily centered on Pepa (Molly Robinson), the focus is on the relationships of the titular women often with the same man, Ivan (Daniel Evan Memmott Jr.). While Pepa spends the play reacting to a message from Ivan, his ex-wife Lucia (Sara Shelby-Martin) is determined to have the last word. Pepa’s friend and fashion model Candela (Lexi Nieto) is navigating her own love life with an ideal man who just may be a terrorist. Add Marissa (Jackie Pock Gibbons) to the mix who’s frustation with her fiance Carlos (Robert Mata) is more than evident. Oh and Carlos is Ivan and Lucia’s son. Lucia employs attorney Paulina (Kelly Holmes) to sue Ivan for money but she has intentions of her own.

The story may sound convoluted but ultimately all the facets fell into place. The book by Jeffrey Lane seemed to squeeze these characters in together quickly for the sake of the story but Cleveland kept the show at an appropriate pace that was both energetic and thoughtful to each character.

Robinson was a solid rom-com lead balancing a flustered side dealing with Ivan and her more sensible side dealing with everyone else. Shelby-Martin nailed Lucia’s antagonistic behavior and her multiple wig changes never made sense but were somehow hilarious. Nieto was wonderfully kooky as Candela which was on full display in “Model Behavior” and her physical comedy. Her yellow suit however was too reminiscent of Cher’s Clueless ensemble. The men certainly take a back seat to the female characters but don’t throw away their moments. Memmott had the luxury of simply being handsome and singing beautifully but he also exuded smarmy charm. Mata was darling as the shy and reasonable Carlos. A wonderful standout was Jason Philips Solis as the taxi driver who opened the show with killer vocals for “Madrid” and then popped in and out of the show as Pepa’s driver. Without stealing the scene, they made an unforgettable impression with their quick moments onstage.

The show recalled much of Waiting for Godot as Pepa keeps waiting to connect with Ivan after his “goodbye” message. But we’re never quite aware the urgency of it all. Perhaps because the story flails in so many directions. The show wasn’t frustrating but it took time to process after figuring out what was going on. But it was also a refreshing take on a musical that strayed into a bit more quirky territory through story and music and songs which were wonderfully performed by Rodriguez’s live orchestra.

Women on the Verge of a Nervous Breakdown runs through Sunday in the Dupree Theater at Irving Arts Center.

SpongeBob the Musical delights at NTPA

Let’s just start the SpongeBob the Musical is not a children’s show. Toddlers will be visually stimulated for sure but teens and older can appreciate the smart and clever comedy in its writing. And yet, it’s a hard sell to say it’s for adults because – you know – cartoons.

For those who have seen the show on Broadway or touring, there is a lot to the show’s scenery and special effects. Like, a lot. So how do local theaters pull off such a spectacle without the budget of Broadway. Set designer Jo Alamres seemed to figure it out by going overboard with the surrounding scenery but smartly leaving the onstage set punctuated by props and actors.

The orchestra led by music director Sophia Garcia graced the rear of the stage the entire time as the cast performed the story of Bikini Bottom that could be facing its last days with an volcano poised to erupt. As the city scrambles to figure out solutions, SpongeBob (Connor Bailey) is set on saving his home with the help of his best friends Patrick Star (A.J. DePetris) and Sandy (Noelle Saul). But Plankton (Caleb Dean) sees an opportunity with his own diabolical plans. Meanwhile, Squidward (Nicole Kimbrell) is in charge of the benefit concert to raise money to save the folks of Bikini Bottom.

What makes the story special is its heart and the lessons of friendships as well as self-reliance and confidence. Sure, these are life lessons, but through pop musical numbers (written by big pop stars) those lessons are joyous and inspiring.

Bailey threw his entire self into the character. The upbeat attitude was perpetual throughought mixed with extensive singing, choreography, physicality and imagination. He was also ideally cast with his just right stature and voice. The same for DePetris as the hulking, gentle giant Patrick. His clueless role was anything but. Saul rounded out the trio as the brainy Sandy and really solidified the three’s chemistry.

Kimbrell seemed to have fun with the pessismistic Squidward and then delivered the flashiest number “I’m Not a Loser” with the energy of fireworks. Dean may have been born to play villains with a handsome scowl and uptight posturing.

Daniel Dean Miranda directed a wonderful spectacle of a show with Garcia’s music directing. Props and costumes all felt right, but where the show fell was unfortunately its sound system. The mics felt more hi-fi than anything and did voices zero favors. When actors hit high notes – especially Pearl (a strong Fernanda Schoening Velez) – their strong belting vocals were completely undermined by screeching speakers.

Thankfully, the joy behind the show and it’s story were what shined the most with its talented cast.

SpongeBob the Musical runs through Sunday at NTPA Plano.