REVIEW: WaterTower’s ‘A Gentleman’s Guide to Love and Murder’ 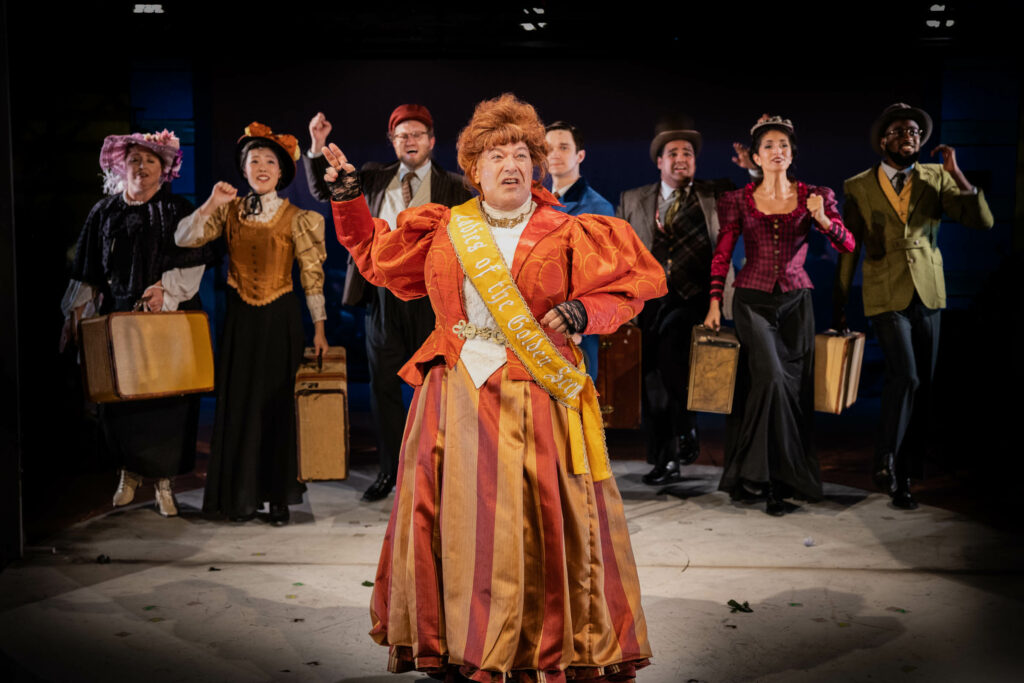 Randy Pearlman and the cast of WaterTower Theatre’s ‘A Gentleman’s Guide to Love and Murder.’ (Courtesy photo by Taystan Photography)

Despite the high body count in WaterTower Theatre’s newest production, death comes with a lot of laughs and show-tunes. Murder has never been funnier and WTT created a solid piece in its Addison home. The show opened July 20 and runs through Sunday.

The story follows Monty Navarro (Andrew Keeler) in early 20th century London who discovers he is part of the influential D’Ysquith family (Randy Pearlman) that had disinherited his recently deceased mother. After learning this information, his attempts to connect with the family are snubbed. When he learns he is eighth in line to head the family, the endearing and clever Navarro takes matters into his own hands.

What’s fun about the show and this production was its sense of self-awareness. Directed and choreographed by Penny Ayn Maas, the tone was consistently witty with a wink but never tongue-in-cheek. With a number of entrances and exits and clever blocking, Maas’ show felt like a puzzle in constant motion up to its satisfying completion. In perfect alignment was Jeff Crouse’s music direction of composer Steven Lutvak’s music and his and writer Robert Freedman’s lyrics taking on what seemed like a mise-mash of vintage styles. The music was delightfully charming throughout that musically narrated the show with the right amount of melodrama.

Although the story centers on Navarro’s murderous journey, it’s the D’Ysquith family that shone the most. Pearlman played all the members of the family that Navarro targets and simply ran away with the show. Male, female, older, younger, it didn’t matter — Pearlman bulldozed the stage with each character in a variety of performances. He ranged from tender to uproarious and he somehow managed to make each entrance a thrilling one.

While Keeler sang with probably one of the most beautiful voices, his Navarro felt rather shy on the charisma and romance his character needed to schmooze and charm his way through the show’s story. Even so, he ably carried the show. Laura Lyman Payne played his romantic interest Sibella who was more interested in social status than love. On paper, the character would seem one-dimensional, but Payne layered on a brutish and privileged behavior laced with nice physical comedy to really bring Sibella to life.

The ensemble actors featured some outstanding moments — particularly Megan A. Liles’ time as Lady Eugenia who just couldn’t be bothered and Mary Kim who took advantage of each moment as the maid and as Miss Barley. A credit to all the actors who delivered every line and lyric with crystal clarity. Even lush musical numbers were understandable with every work.

WaterTower’s staging almost never disappoints. The two-story setting by Murell Horton was lavish and smart. Both sound and lighting by Mark Howard and Aaron Johansen were strong. Some scenes seemed to run a bit darker but that could easily have been a choice in tone. Horton’s costumes and Michael B. Moore’s wigs were wonderfully stylish and appropriate. The wigs were particularly stellar on the women and looked quite realistic.

As a whole, the cast together brought strong energy to A Gentleman’s Guide to Love and Murder which made for a deathly fun time.