Review: Love is a battlefield in Theatre Three’s ‘Virginia Woolf’ 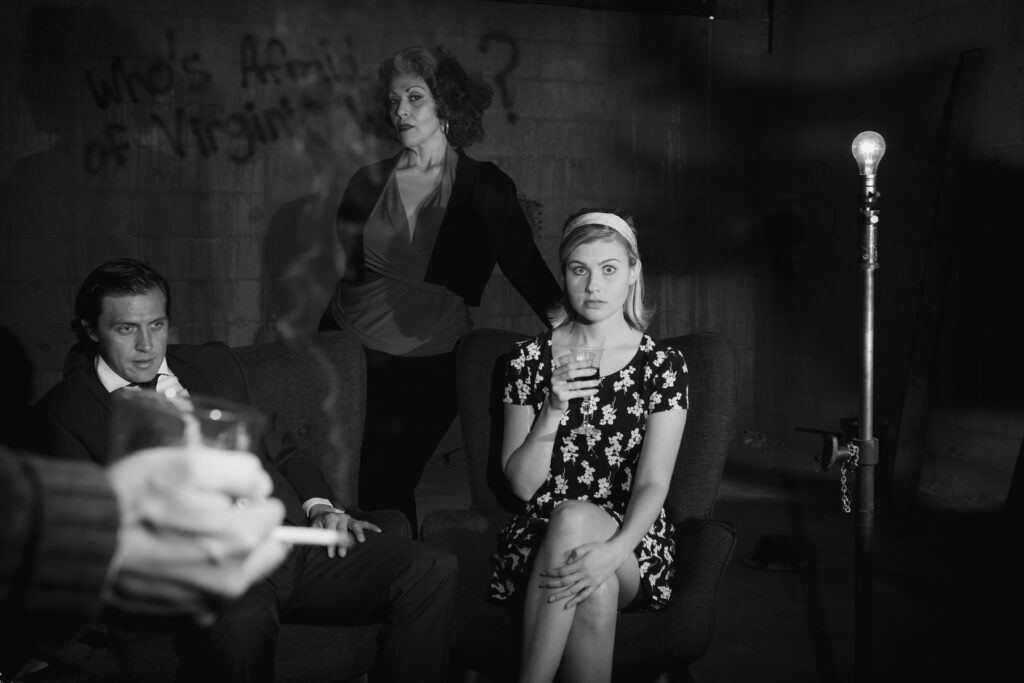 Even with weeks of delays from opening date, the cast of Theatre Three’s Who’s Afraid of Virginia Woolf? dropped thespianic bombs on its Thursday night preview. The four actors delivered the heavy drama with an intense vengeance. Perhaps some of that was from finally being able to put it on stage for an audience, but the talent of the actors was certainly the reason Woolf soars.

Delays were due to the building’s ongoing inspections after its renovations. The company was finally able to receive its Temporary Certificate of Occupancy to have a performance on its intended July 7 opening and now for its run.

That the four-person cast was led by T3’s artistic director Jeffrey Schmidt as George and assistant AD Christie Vela as Martha added an even deeper poignancy — or will so to those familiar with their work locally. It was literally like watching mom and dad in a marathon fight with words as weapons and gin as ammunition. Beyond that footnote, the two unpacked each character with such frightening ferocity. Both created time bombs but in different fashions. Vela’s Martha was a continuous explosion of varied potency while Schmidt would build up George’s anger before unleashing it.

Added to that was each character’s nuance. As a 40-something woman, Martha exuded her sexual appeal and perhaps was also afraid of losing it. George seemed almost resigned to his somewhat failed ambition and age yet still fought for his value. Amidst their dialogue with each other, the two still fleshed out these corners of their characters which played off against the almost opposite demeanor of Martha and George’s late night guests Nick and Honey played by Felipe Carrasco and Olivia Cinquepalmi respectively.

As the fresh, younger couple, Nick, a new professor where George teaches and Martha’s father serves as its president, Carrasco and Cinquepalmi arrived with their younger generation optimism only to have their characters walk into a minefield that might destroy them entirely. Carrasco had lovely charm as we’re first introduced to Nick. The way Carrasco peeled his character away as he is perpetually emasculated by Martha and George was striking. Carrasco’s Nick was certainly unrecognizable by the end. As the loving young wife Honey, Cinquepalmi was delightful as the giddy guest who began to explore her love for brandy. Her drunken performance certainly evoked that bless-her-heart reaction, but in turn, she navigated a range of emotions as Honey tried to figure out her counterparts and where to fit in.

Directed by Blake Hackler, the war onstage was a precise battleground. Nothing was wasted in dialogue or physical action. Scott Osborne’s of Martha and George’s residence was created through mostly books and lights but was evocative of their lived-in life. Words were their weapons which echoed in the hundreds (thousands?) of books that made up the set. Jacob Hughes’ moody lighting cleverly conjured that late/middle of the night despair coupled with bad decisions and alcohol.

There’s much to be afraid of in Who’s Afraid of Virginia Woolf? It reminds us of our own flaws but then points out that they may not be as bad as these people’s. Albee didn’t create a happy play or characters here, but that’s exactly what made the production an intense theatrical experience.