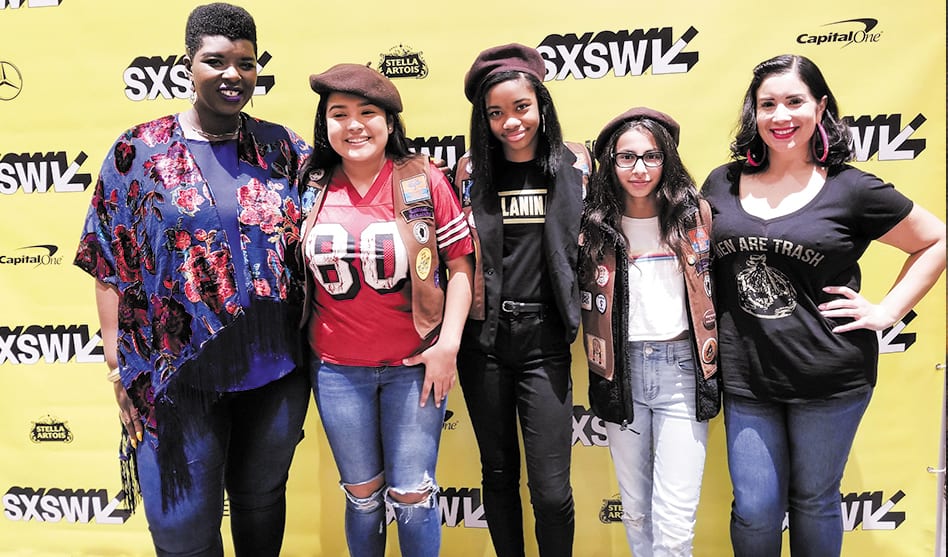 Woke, wise and under 5 feet tall — the Radical Monarchs bring their girl-power message to the oak Cliff Film Festival

The Oak Cliff Film Festival isn’t a big one (just four days) or a storied one (this is only its eighth year), but it didn’t take long for it to stake out an identity showcasing the interesting and the unique. Among the queer-interest films that will screen this weekend are Cassandro, the Exotico!, about a gender-bending Mexican luchador; the lesbian dramas Jules of Light and Dark and Sword of Trust; and a sweet, compassionate documentary about pint-sized social justice warriors called We Are the Radical Monarchs. (It screens June 8 at 3:15 p.m. at the Bishop Arts Theatre; visit OakCliffFilmFestival.com for a full lineup of the fest.)

It doesn’t take a genius to see a handful of tween girls attaching the name “radical” to their organization to realize this ain’t your sister’s Girl Scout troop — they are as woke as they are adorable.

And they are already seasoned movie stars. Some of the girls featured in the film, all of whom are original members — Amia, Lupita and De’Yani — were working the press earlier this year at South by Southwest, accompanied by the film’s director, Lisa Goldstein Knowlton, and the group’s co-founders, Marilyn Hollinquest and Anayvette Martinez. That’s where I sat down with all of them to discuss their mission, dealing with the haters and the lessons they have learned.

Dallas Voice: It’s a relatively new group —Lisa, how did you hear about it? Knowlton: I happened to see an article online in The Guardian, and the headline said something like, “girl troops and radical,” and you just don’t see those words together at the same time much! And there was a picture of the very first Oakland Black Lives Matters rally, and they are standing there with their Black Panther-inspired berets in front of a banner, and I was like, “Who are they?! What are they about?” And I suddenly had hope for the future. And I just started pounding [on doors] and met Marilyn.

Was the name of the group inspired by the 1970s San Francisco-based activists called the Radical Faeries? Hollinquest: [Not directly], but they are dope, too. Just those words — queer, radical — are really impactful and catch people’s eyes.

How has it grown? You started with one troop, grew to two and you’re about to launch four more this year, right? Martinez: The demand has really been big from the community. Folks are really hungry for it. Marilyn and I have been really intentional about growing slowly. We learned a lot from Troop 2 and now we’re ready to roll.

Right wing media have attacked groups like this, often saying they actually teach hate and racism. So what of it, girls? Are you more racist now? How do you react to those criticisms? Lupita: I feel specifically with the Fox News thing is first of all, people of color can’t be racist — that’s, like, not a thing. Racism is put on us. I don’t really take it personally — that’s just people being ignorant. So it doesn’t affect me like that.

De’Yani: Same thing with me —when I saw that I was just like [rolls eyes] “OK.” They are hating on us, but we’re gonna keep pushing through and show them how impactful we can be, and it doesn’t really matter what people say about us as long as we know we are making a change.

In the film you teach the girls about Janet Mock, the trans activist. Which of course it something you don’t often see kids being educated on. Hollinquest: I think a lot the criticism [of us for such things] is because the adults are uncomfortable talking about it and don’t have the tools to explain things to young people. Young folks are really adaptable — they say, “gender spectrum, cool, awesome, that’s dope, got it.” That generational difference is where [the backlash] is coming from. I’ve worked with youth for a long time and it’s the adults that have the hangups; it’s never coming from the kids.

You started your movement before the Parkland kids. The inspirations for such groups is very different, but do you feel a kinship with those students or others like them? Lupita: Not directly — we don’t text each other or stuff like that — but I do follow what they do and am inspired by how they are taking action.

You’ve all been with the group since it started in December 2014; how has the progression felt for you? Has it become a part of your identity? Amia: Yes! Activism has become such a part of our lives from the start. This group has really gotten us speaking for our rights and our people and our brothers and sisters. We are all super appreciative of the groups. And today it has affected how we look at the world and how we speak up for other people.

What is the major lesson each of you has taken from your membership in the Radical Monarchs? Amia: I think it’s mostly about speaking up and being allies, but also unity and pulling together, because we are stronger together. It has made us learn about how to come together and how to speak up for people who don’t have a voice in our society.

Lupita: Me and my family would go to marches [before I joined], but after I realized our sisterhood is so much stronger than I thought.

DeYani: The lesson I have learned is, don’t hold back. There are so many bystanders right now — I used to be a bystander before the Radical Monarchs. If you want to see something change, then you work toward it to help it change.