Putting $ to good use 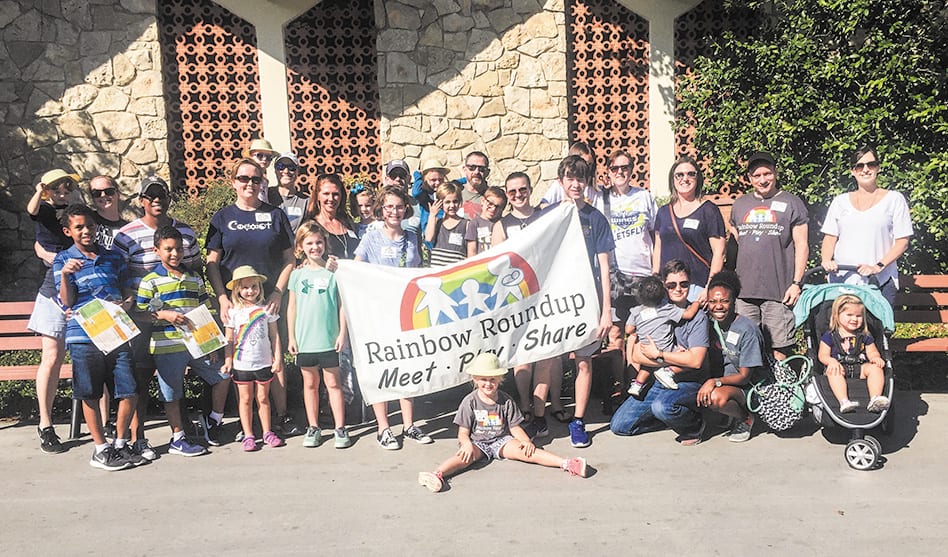 Each year, the Black Tie Dinner Board of Directors selects up to 20 North Texas beneficiaries to split proceeds from that year’s dinner with the annual national beneficiary, the Human Rights Campaign. This year, four new beneficiaries are among the mix of North Texas organizations that will receive money from the dinner, taking place Saturday night, Nov. 11.
Trevor Project, Big Brothers/Big Sisters, Rainbow Roundup and Suicide and Crisis Center of North Texas (SCCenter) are Black Tie’s newest beneficiaries.
Every beneficiary must reapply to participate each year, and funds are distributed based on the organization’s participation throughout the year, including filling at least four tables, selling at least 25 tickets in this year’s raffle for a 2018 Mercedes Benz C300, volunteer hours and donations to the silent auction.
Although Trevor Project and Big Brothers Big Sisters are national groups, both have a local presence, and it’s their local offices that will receive Black Tie funds.
The local Big Brothers Big Sisters agency is one of the organization’s largest chapters in the country. Trevor Project established a local office because, officials said, the youth hotline receives more calls from this part of the country than anywhere else. Rainbow Roundup is a local group for LGBT families, and SCCenter runs a hotline for people in crisis or having suicidal thoughts.
Hotlines 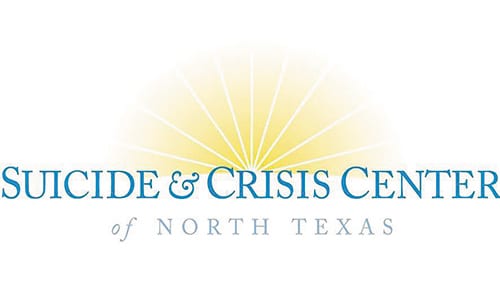 Jonathan Foulk, senior corporate development officer of Trevor Project, is on a mission.
“Everyone needs to learn about Trevor Project,” he said. “I’m invested in it because we need to save more young lives.”
Foulk said he did not have an easy time coming out. As a child, he was in foster care and “lived with 33 different families,” he said. “At times I thought about suicide, so I have a personal connection.”
But Foulk doesn’t dwell on his own story. He said he has a strong background in fundraising and development. When his current position came open two years ago, he found his dream job — something he could be passionate about.
Next year marks Trevor Project’s 20th anniversary, and Foulk wants to see the organization double in size.
“The need is greater now than before,” he said. 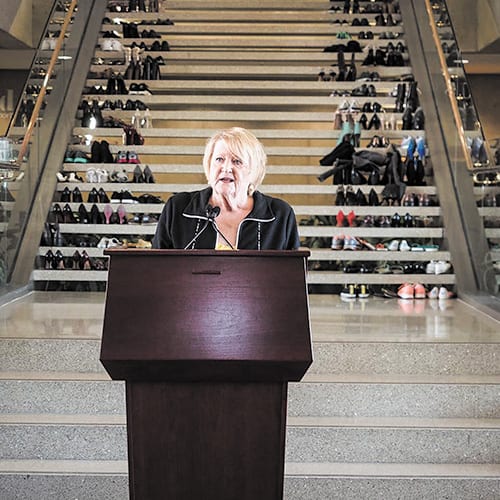 The highest call volume Trevor ever received was after the massacre at Pulse in Orlando. “Then the election happened and the phones started to ring” again, he said.
That week, the call volume was four times as high as after Pulse, and the phone calls haven’t stopped coming, he said. Teens began calling out of fear, and Foulk said Trevor’s message to young people calling is that they’re loved, safe and not alone.
While Trevor Project’s hotlines are located in New York and Los Angeles, SCCenter is a local hotline for people in crisis or having suicidal thoughts. The organization will use Black Tie funds for additional staff training on LGBT issues and to allow them to do more marketing in the LGBT community.
Executive Director Margie Wright said her hotline also received a dramatic uptick in calls after the election. While her phone volunteers don’t take any political position during calls, she said mostly people just needed to talk when they heard others around them spewing hate.
In addition to 24-hour crisis intervention hotlines, SCCenter offers survivors of suicide support groups and screening for suicidal tendencies and depression in schools.
She said the survivor of suicide groups, which are for people left behind after someone has committed suicide, often include a same-sex partner.
Suicide is often referred to as “the S word,” because it carries a stigma that other forms of death don’t. Wright said she’s heard a lack of compassion from those who lost a spouse to disease directed to the survivor who lost a partner to suicide — implying, “Your partner wanted to leave you and mine didn’t.” 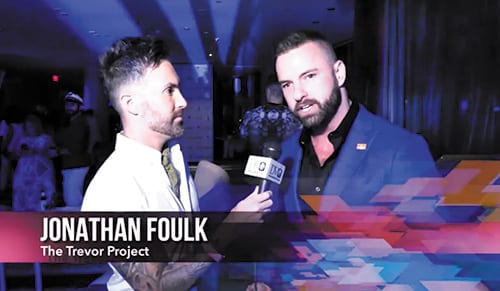 Wright said all services of SCCenter are offered at no charge and as part of its training, the agency makes sure volunteers will help anyone on the line, regardless of that person’s sexual orientation, gender identity or other characteristic.
Volunteers who can’t help anyone who calls are not allowed on the phones.
Families
Rainbow Roundup started as a Facebook group but has grown to almost 2,000 members representing hundreds of LGBT families.
Co-founder and Executive Director Kimberly Kantor said the group connects families to resources for support and provides social and educational programming monthly. She said the group refers families to everything from fertility clinics to counseling to pediatricians to groups like GALA North Texas, which runs an LGBT youth program.
Recently, Rainbow Roundup held PumpkinPalooza with 125 pumpkins to paint that were donated by Central Market. And last week, a large group went to the Dallas Zoo. Coming up is Rainbow Roundup’s Polar Express Holiday Party.
The best way to keep up with events is through the group’s Facebook page or its website: Rrup.org.
Kantor said she hears kids say a Rainbow Roundup event is the one place they don’t have to explain anything about their families.
“People reach out to us from outside of Texas as well,” Kantor said.
That’s not surprising, because Rainbow Roundup has become one of — if not THE — the largest LGBT family group in the country. And they’ve done that with no paid staff.
So what exactly will Rainbow Roundup do with the proceeds from Black Tie Dinner? The board’s meeting in a few weeks to figure that out, but Kantor said the money would be used to provide additional programming, gain added visibility for the organization and offer more educational opportunities. 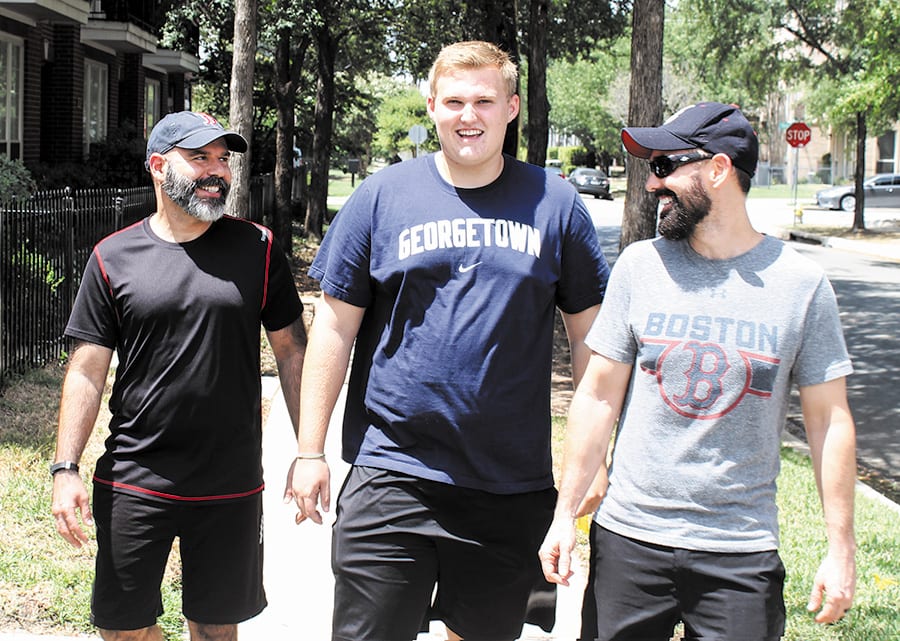 The bigs with their little in the middle

Big Brothers/Big Sisters
Big Brother/Big Sisters is the other family-oriented group participating in Black Tie Dinner for the first time. While Rainbow Roundup may be the youngest group among all beneficiaries, BBBS, founded in 1904, is the oldest.
Bigs (volunteer mentors) are asked to commit to at least a year and spend at least one day a month with a little (the mentee). Most spend more than one day a month. Some spend time together weekly.
After training, bigs and littles are matched. Parents have the right to refuse a match they don’t think would be good for their child and volunteers may refuse a match they don’t think will work. The goal is to make a good match that will continue for years.
Some bigs help their littles study, but usually they go out for an afternoon outing. The organization is able to help with the cost by offering free tickets to a number of events.
And one big message BBBS has for the community is LGBT bigs are welcomed and needed and encouraged to apply. Not all LGBT bigs are matched with LGBT youth, but some are. This year, BBBS began working with Out Youth Denton and is trying to match everyone in the group with an LGBT or ally big.
The rest of the beneficiaries
In addition to the four new beneficiaries and the HRC Foundation, 2017 Black Tie beneficiaries are: AIDS Interfaith Network, AIDS Outreach Center, AIDS Services of Dallas, Cathedral of Hope United Church of Christ, Celebration Community Church, Congregation Beth El Binah, Equality Texas Foundation,
Lambda Legal Defense and Education Fund, Legacy Counseling Center, Legal Hospice of Texas, Northaven United Methodist Church, Promise House, Resource Center, Turtle Creek Chorale and Uptown Players Inc.
Last year, Black Tie distributed a total of $1.245 million to 16 beneficiaries. To date, the dinner has distributed more than $21 million since its inception in 1982.