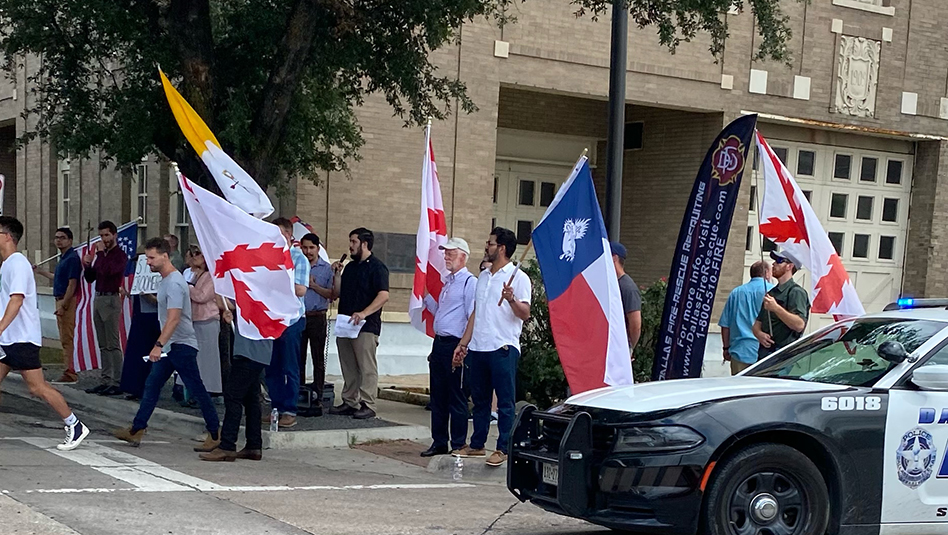 UPDATE: Despite claims by those gathered Saturday morning to protest an event being held inside, and reports in a right-wing publication, police did not go in and “break up” the event, according to an activist present at the scene. At the request of the right-wing protesters, officers did go in and do a “welfare check,” the witness told us, but the officers came back out said said “There are no problems in there.”

While some people described the event inside the bar as a “drag queen story hour,” someone commenting on this post has said it was, instead, “a family-friendly drag show.”

ORIGINAL POST: While a huge crowd was gathering in Fair Park for the first day of Dallas Pride weekend and the Miller Lite Music Festival, a handful of right-wingers hit The Strip on Cedar Springs today (Saturday, June 4)  to protest …. well, something.

The protesters reportedly gathered first in front of Mr. Misster, at the corner of Cedar Springs Road and Reagan Street before Dallas police officers forced them to move across Reagan to the sidewalk in front of the fire station.

A local activist, who was at the scene, said the protesters were there to rally against a drag queen story hour happening at Mr. Misster. “They were there to scream at kids,” the activist said on Facebook, noting that some were Roman Catholics who were “actually behaved and just chanting the rosary. It’s the Infowars/fascist crowd that is problematic.”

The group, described in a Facebook post as “christofascists,” carried signs vaguely resembling the Texas flag and the U.S. flag along with a large white flag with some sort of X symbol in red, and a gold-and-white flag with some symbol in the center. The size of the group has changed over the course of their protest, but one observer said it averaged about 20.

(The gold-and-white flag, I have been told, is the Vatican City flag. The white and red one, best I can tell, is the Cross of Burgandy, with the X representing the cross on which Andrew the Apostle was crucified. Sorry for not being Catholic and knowing that already.)

Photos show one protester carrying a sign declaring “confuse a child, abuse a child,” and another had a sign shouting “stop groomers.” Yet another demands, “Stop exploiting our kids.” And, in what is apparently a swipe at the rainbow power of Pride Month, one woman wore a black T-shirt with a block of rainbow colors saying “rainbow revival.” 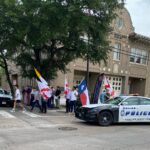 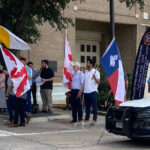 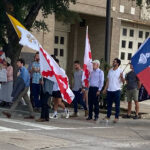 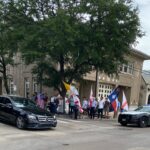 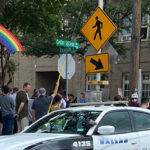 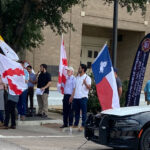