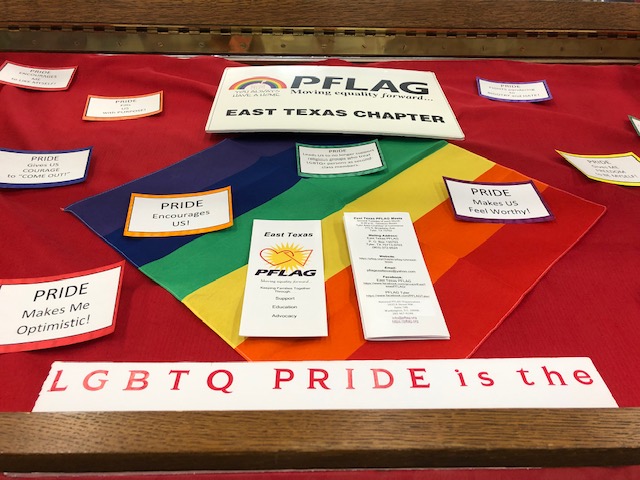 “The Tyler Public Library currently houses two displays commemorating Pride Month. One, a display sponsored and assembled by Tyler Area Gays (TAG), is housed on the second floor of the Library, displayed immediately next to the elevator. On Thursday, June 2, Tyler Public Library staff moved a second display sponsored and assembled by Parents, Families, and Friends of Lesbians and Gays (PFLAG) from the first floor, where it had been previously displayed and where the children and young adults book sections are housed, to the third floor, again visible as soon as you step off the elevator, where our Local and Family History room and Computer Lab are located.

“The Library does not censor materials that are constitutionally protected and will not remove LGBTQIA+ exhibits that have reserved placement per our policy. The Library does reserve the right per the Library’s Exhibits & Displays Policy to decide placement of material displays sponsored and assembled by the community for public viewing. This relocation was made in response to concerns the Tyler Public Library has received from community members regarding the placement of LGBTQIA+ materials near and within youth areas.

“We understand and acknowledge this decision will leave those who had hoped to see the display(s) removed from the premises dissatisfied, and it will leave those who would like the second exhibit to remain on the first floor equally dissatisfied. This is our attempt to find a balance between viewpoints so that all may be seen, heard and included at the Library, which provides service to the entire community.”

ORIGINAL POST: Every June since 2015, the Tyler Public Library has given space in its downstairs display case to PFLAG Tyler/East Texas (Parents, Families & Friends of Lesbians And Gays) for a Pride Month display promoting support and advocacy for and education about LGBTQ people and their families.

That first year, according to PFLAG member Lou Anne Smoot, the display was removed after problems caused by “a few complainers,” but those problems were “soon resolved,” and City Manager Ed Broussard, who had initially ordered that the display be removed, allowed it to be put back in the case.

And everything had been fine — until this year, Smoot said, adding that this PFLAG display this year has been hidden away in a display case on the second floor of the library.

Smoot and her wife set up this year’s display on PFLAG on June 1. The following day, she said, “We were notified that the city manager (Broussard) ordered the library to move our materials to the upstairs display case which is off the beaten path, so to speak, and seen by very few people.”

According to Smoot, in explaining the decision, Broussard said, “We decided to have the Pride Month display at the library be located on the second floor as it relates to emotional life decisions for people. This provides an appropriate location for these conversations for our patrons and citizens.”

Dallas Voice has contacted Tyler City Manager Ed Broussard for comment. We will update this post when we hear from him.