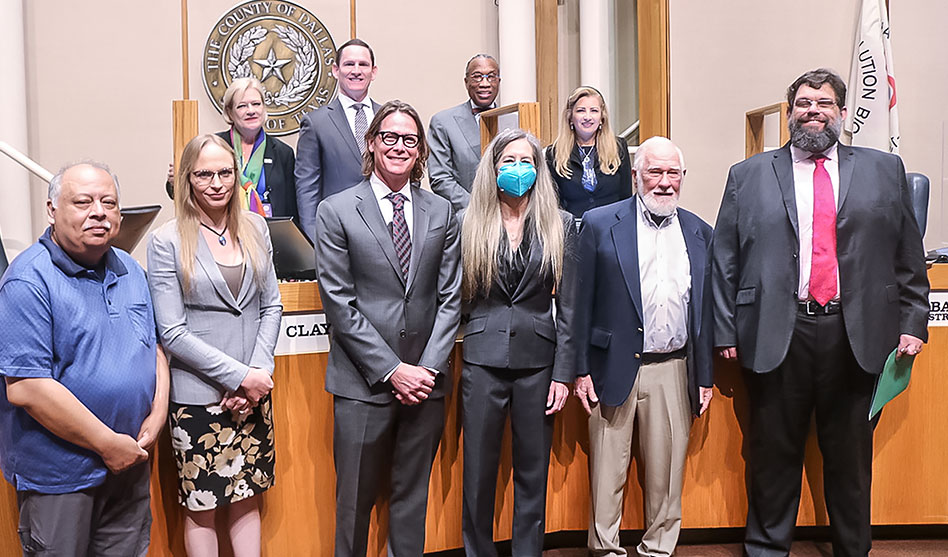 Then, for the first time during his term in office, Commissioner J.J. Koch — who has always voted for the Pride resolution since joining the court, unlike his predecessor, who refused even to be in the room for the reading of the document — told the people who had come to see the proclamation passed that he would abstain from voting because of the last two provisions.

Most weeks, county commissioners court meetings begin with resolutions and proclamations. Commissioners recognize groups and organizations in their districts who achieved a milestone or provided a service, county employees who are retiring or individuals in the community who are reaching a landmark. For example, when Don Maison retired from AIDS Services Dallas, commissioners issued a proclamation honoring him.

Rarely are the proclamations controversial. One commissioner or another might have something to add or may even disagree on a point, but then each usually signs the resolution, and they all take a photo with those being honored.

But now, welcome to the post-pandemic era, when even a member of the LGBTQ community showed up to object to the last two provisions of this year’s Pride Month proclamation.

The first two points in the proclamation define Pride Month as the commemoration of the June 28, 1969, rebellion at the Stonewall Inn in New York City that is seen as the beginning of the LGBTQ rights movement, and note that here in Dallas County, LGBTQ people live in every neighborhood and are of all faiths, races, national origins, socioeconomic statuses, education levels, employment fields and political beliefs.

The next point of the proclamation details the legal struggle for equality and explains each of the cases involved through the years, starting with One, Inc. v. Olesen, the 1958 case that established the right to free speech for the emerging LGBTQ liberation movement.

One, a gay magazine, was fighting for its right to publish and distribute.

The final noncontroversial point in this year’s proclamation notes that this month is the seventh anniversary of the U.S. Supreme Court’s Obergefell decision giving same-sex couples the right to marry under the constitutional guarantees of due process and equal protection.

But the final two “whereases” were arguably speculative. And that’s where Koch and a member of Log Cabin Republicans, who had signed up to speak, both objected.

“In the wake of the leaked draft of the Supreme Court’s intention to overturn Roe v. Wade, the draft’s provocative rhetoric is generating concern that LGBTQ+ advances and other matters based on the right to privacy could be vulnerable,” Daniel wrote in her proclamation.

She says cases like Lawrence v. Texas, which overturned the few remaining sodomy laws across the country including here in Texas, are based on the same right to privacy as Roe and could also be overturned.

“The draft opinion also signals that the court is willing to disturb significant legal precedent which could have consequences beyond the immediate overturning of the decision,” Daniel wrote.

The final point of the proclamation notes that attorneys warn that if the wording of the leaked abortion decision is final, it opens a Pandora’s box for rolling back gains the LGBTQ community has achieved.

“As proof of the current contentious climate, the last Texas legislative session saw an unprecedented number of over 75 of anti-LGBTQ+ bills filed,” Daniel wrote as part of the last point of her proclamation.

Koch objected that those two points were speculative and political. Without those final two points, he said, he would have voted for the proclamation to declare June Pride Month in Dallas County. He asked those two points be removed, and he said he was sorry Daniel insisted on including them.

Several members of the LGBTQ community spoke about the proclamation during the meeting, including one member of Log Cabin Republicans who agreed with Koch. He objected to the characterization of the current climate as contentious and said the final two points were unnecessary in a proclamation declaring June Pride Month.

Jayla Wilkerson, an attorney and a member of the trans community, pointed out that neither the Texas sodomy law nor the Texas marriage code has been repealed or updated since the SCOTUS rulings overturning them, which means that both would be immediately applicable again were those court rulings overturned.

For that reason, she said, the contentious points of the resolution were definitely more than mere speculation.

Lambda Legal attorney Shelly Skeen spoke about Dallas being a leader in Texas for protecting LGBTQ rights. Because the state offers no protections, she said, those local protections become even more important.

Commissioner John Wiley Price reminded everyone that mostly he can’t tell if someone is gay, but you can’t hide race. Daniel acknowledged Price’s comments and said she’d been discriminated against as a woman, something she can’t hide. They acknowledged each other.

Then to try to lift the mood, Garcia acknowledged the diversity in the room and reminded everyone Pride is a celebration.

In the end, the proclamation passed with four votes for the resolution and one abstention. Everyone, except Koch, stood for a picture and wished each other happy Pride Month.