While La Zona Rosa may be more well known, El Centro Historico offers many LGBTQ bars to celebrate at

MÉXICO CITY — After a two-year hiatus due to COVID, México City’s 44th annual LGBTQ+ Marcha (Pride Parade) is back, taking place Saturday, June 25, with more than 1,000,000 LGBTQ people and their supporters expected to attend the extravaganza.
And with a crowd that large, the gay bars located in La Zona Rosa (The Pink Zone), the city’s best-known LGBTQ entertainment district, will be crowded. But what people don’t realize is that less than 2¼ miles north of La Zona Rosa is another LGBTQ entertainment district located in El Centro Historico (the Historical Central District), an area that is along the parade route to the Zocalo, the city’s public square.

El Centro had gay bars — well, cantinas — long before La Zona Rosa even existed as a gay mecca. Though some cantinas that existed for some 60 years recently closed due to COVID, some larger bars in El Centra have thrived, with new gay clubs opening up in the area. 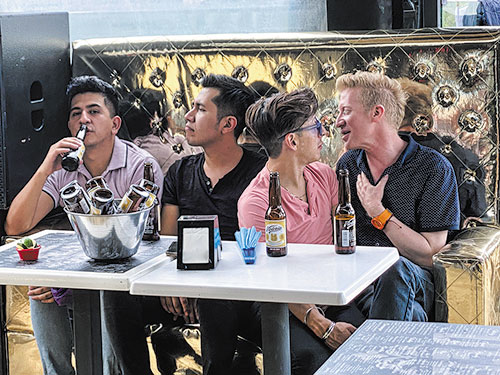 Enjoying the luxury at Brunch

Along the parade route, just two blocks northeast of Alameda Park and one of Mexico City’s main museums, Palacio de Bellas Artes (Palace of Fine Arts), is Calle Republica de Cuba where one can find several gay bars that start opening on Thursday night and continue with their gala activaties until Sunday at 3 a.m. If you don’t want to take an Uber to get there, you can use the subway, El Metro, since the Bellas Artes subway stop exits onto Cuba street.

Soberbia
First on Cuba Street is Soberbia, located at República de Cuba #2, a very popular and always packed gathering place for those that like new mixes of music and strong drinks. The party there begins on Thursday night with no cover, and the crowd is evenly mixed of young men and women. TV monitors around the bar music videos and stills of iconic Méxican and American movie stars. Scantily-clad male and female dancers in cages providing entertainment.

Want to sit down at a table to enjoy the sights and talk with friends? Not at Soberbia; there are no tables, chairs or bar stools in the place. It’s really all one big dance floor. There is no cover charge on Thursday nights, but on Friday and Saturday nights there is $100 peso ($5 USD) cover charge. Soberbia is the one the newest clubs on Calle Cuba and often has a line of people waiting to get in. 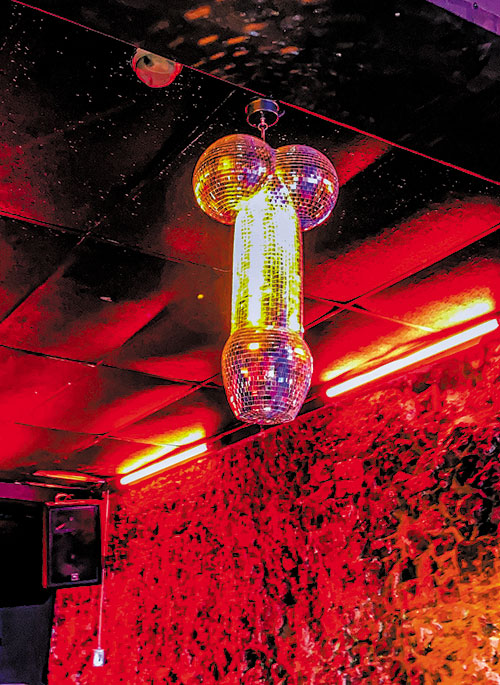 El Oeste
Next door is El Oeste (The West), at República de Cuba No.8. Think small Round-Up Saloon here. Music is not what one would consider country Mexican music like Ranchera or Norteña music but is instead a mix of Cumbia music. There are tables and chairs here and an ample supply of peanuts and chicharrones (pork skins) for customers to snack on.

El Oeste doesn’t have a huge dance floor, but the one they do have is just right for the space. It is open nights Thursdays through Saturdays with a $50 pesos cover ($2.50 USD).

Marrakech Salon
Down the street is the Marrakech Salon, known as El Marra, located at República de Cuba 18. Owned by the same people as Soberbia, this spot has very laid-back, mixed crowd of casually dressed and mostly young and tattooed patrons. Central to the decorations is a big mural of a gay Zapata, a hero during the 1910 Mexican Revolution. A small replica of this painting caused a scandal when exhibited in the Palacio de Bellas Artes (See “Gay Zapata painting stirs debate,” Dallas Voice, Dec. 20, 2019).
El Marra is iconic as the gay bar that brought other more established gay businesses into the neighborhood a little more than 10 years ago.

La Malagueña
Not to be missed is La Malagueña, the clothing store offering cowboy accessories — boots, belts, hats and shirts — by day that becomes a gay cowboy country bar by night. Open Friday, Saturday and Sunday nights from 8 p.m.-3 a.m., La Malagueña is located at Eje Central Lázaro Cárdenas 10 at República de Cuba. This is strictly a man’s bar, with lots of denim, cowboy shirts and cowboy hats. The place has a $50 pesos ($2.50 USD) cover charge. 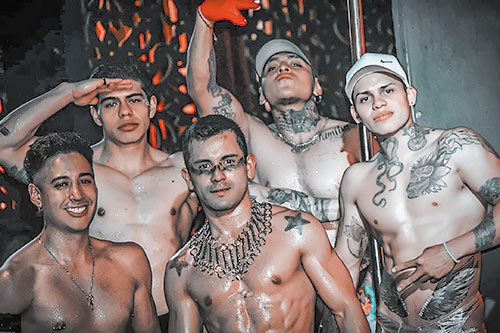 If you enjoy male dancers, the bars of El Centro Historico have plenty to choose from

The bar is situated at the back of the clothing store, separated by a long cloth panel made to look like brick. Once the panel is removed, you step into a salon area that has a 1 ½-story-high ceiling and beautiful cement columns supporting a balcony. It is a very masculine place, with maybe one or two women occasionally found in the crowd. Music is mostly cumbia played by a DJ.

Teatro Garibaldi
One of the largest clubs in the area is Teatro Garibaldi at Eje Central Lázaro Cárdenas 43, two two blocks off República de Cuba. Cover charge here is $100 pesos ($5 USD). Teatro Garibaldi appears to be small when you look at it from the front door, but that is an optical illusion. Once you get inside, you will realize the place is actually one of the biggest clubs in El Centro, taking up enough space for three bars. One area is the show bar with stage, table and chairs where you can watch male dancers and drag performers. The other two bars seem like independent clubs, with different DJs and male dancers on small stages. This place is open 8 p.m.-3 a.m.

Other bars
There are too many gay bars in El Centro to name them all, for example El Tahúr at Belisario Domínguez 11-B, is a small L-shaped cantina full of older, moderate income ranchers and construction workers that has been around for at least 50 years. It has very small tables and chairs to make room for everyone, and while there is no DJ, there is a jukebox.

There is a leather and bear bar called Hot Room at República de Cuba 45. Instead of the usual mirror ball, Hot Room mirror has a mirrored penis complete with testicles. 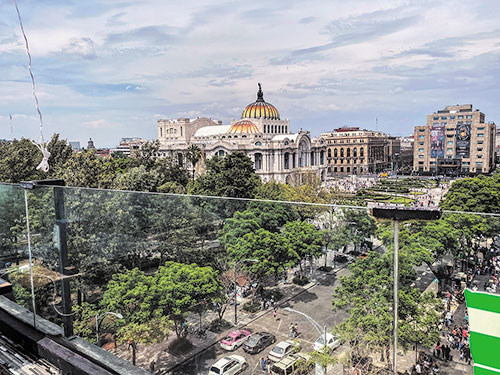 The view from Brunch

The ONLY place open on Sunday afternoon is called Brunch at Av. Juarez 32, on the top floor of a sixth-floor building full of bars. Despite the name, there is no food served at the Brunch, just drinks, and the open space décor with no walls makes it seem more like being on the terrace of a building with great views El Centro Historic buildings. DJs are brought in from various parts of Mexico to spin music for their patrons from noon-11 p.m., but this one is open only on Sundays.

The Pride parade
Dallasite Juan Herrera, who comes to México City often and is coming for this year’s Pride parade, said he likes the Centro Historico gay bars more than the Zone Rosa because it has better crowds and is more friendly and less pretentious.

Herrera also says he likes the México City Pride Parade more than the ones in North Texas because the México City parade is more than just a spectator event where people sit and watch floats pass by. In México City, Herrera notes, those attending ARE the parade, marching along the parade route themselves because this is truly a marcha (march) for gay Pride, liberation and, most importantly, visibility.

On Saturday, June 25, people will begin gathering at 10 a.m. at the Angel of Independence, located in La Zona Rosa on Avenida Paseo de la Reforma. The parade steps off at noon, with participants marching to El Zocalo, the main square in front of the Presidential Palace in the center of the city.

Once the speeches and entertainment at El Zocalo are over, everyone will head out to the bars, many of which will be open early during this special day. And the bars of El Centro Historico are just a short walk away.

Jesus Chairez is a former Dallas resident now living in México City. He was producer and host of North Texas’ first bilingual LGBT Latino radio show, Sin Fronteras, on KNON 89.3 FM from July 1993 to July 2005. Chairez is a published author in the book, Queer Brown Voices, a collection of personal narratives of Latina/o Activism. Chairez can be reached at facebook.com/JesusChairez.