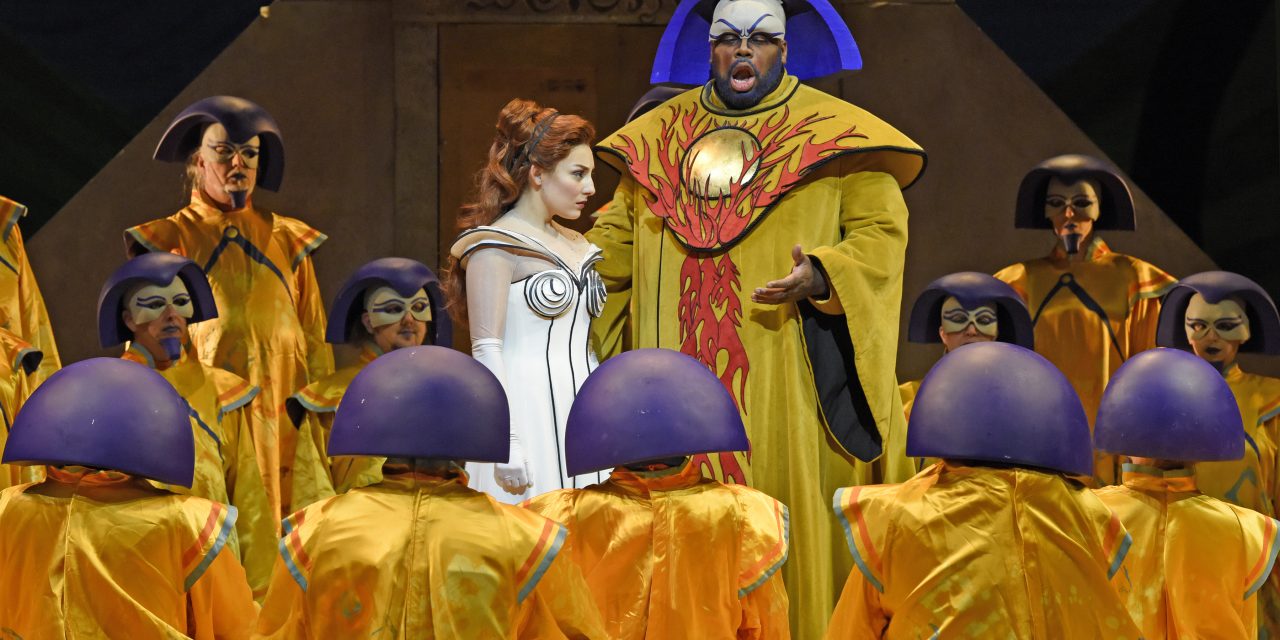 We’re culturally acclimated to the idea of a family ballet — what else is The Nutcracker? — but a family opera? Maybe the one-act Ahmal and the Night Visitor (in English, at that) and a few other short piece, but Mozart? And yet, in the late director Peter Hall’s production, revived by the Dallas Opera as their season opener, of The Magic Flute (Die Zauberflote), that’s pretty much what we get. The score is not one of Mozart’s more complex puzzle boxes (surprising, since it was hist last opera); but in its simplicity can be found tremendous charms, which are largely tapped into here. 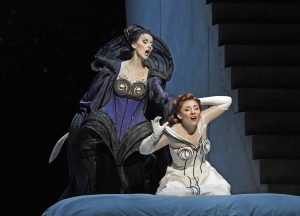 The story is a fairy tale with tons of camp… before camp was a thing. A young swain, Tamino (Paolo Fanale), lost in a forest, encounters a huge serpent (rendered here as a gigantic papier-mache puppet) that so terrifies him he passes out. A trio of sprites, infatuated with his beauty, slay the serpent and enlist his services to rescue Pamina (Andrea Carroll), the daughter of their enchanted mistress, the Queen of the Night (Jeni Houser), from a potentate named Sarastro (Morris Robinson). From there, it is a fairly standard quest adventure, with Tamino sharing the heroic duties with the fantastical comic relief Papageno (Sean Michael Plumb) as they encounter bloated, decadent priests, magical creatures (one half penguin/half alligator) and mystical symbols. 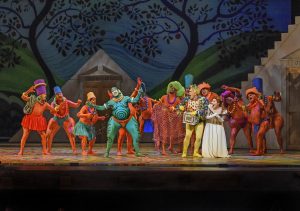 The Magic Flute has long been rumored to contain secret coding about Freemasonry in its imagery, and even if that’s a red herring, Gerald Scarfe’s sets and costumes accentuate the possibilities with pyramids, eyes, compasses and colorful characters that dazzle the eye as much as the ears.

And despite its simplicity, there is room to dazzle the ears. Of course, there’s the Queen of the Night’s famous aria, which Houser performs with enviable vocal control. Fanale and Plumb as both engaging in roles that aren’t vocally intensive, but the young, beautiful Carroll’s clarion soprano and Robinson’s resonant basso profundo set them apart and cast their own kind of spell.