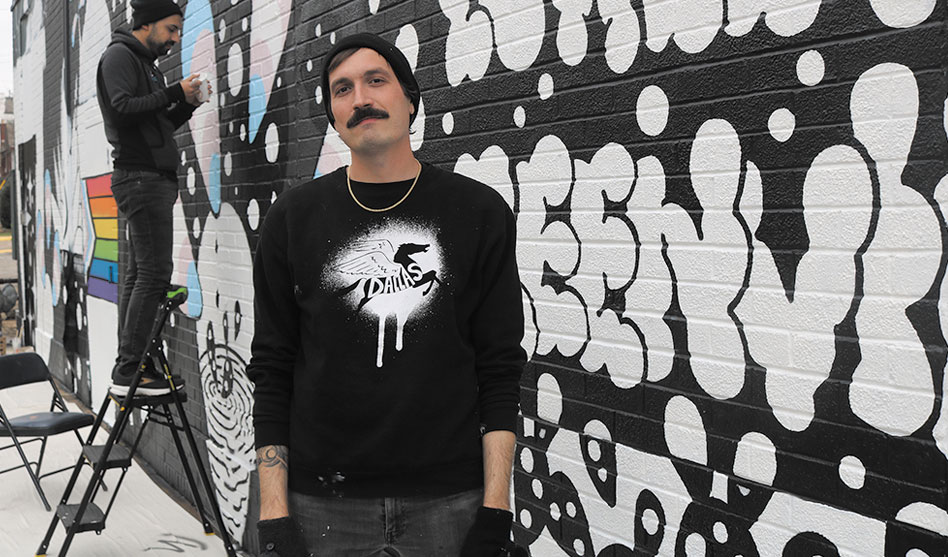 Muralist Will Heron, chosen for the job, said he submitted several versions of his piece before beginning work that covers a wall on the former Eastside Social on Lowest Greenville Avenue at Oram Street.

As Heron struggled to finish the wall before temperatures dropped to a point lower than would allow the paint to dry, every car that passed stopped to look at his work. And several pedestrians walked by to take pictures.

“Thank you for bringing the rainbow to this side of town,” one passerby called out to Heron. 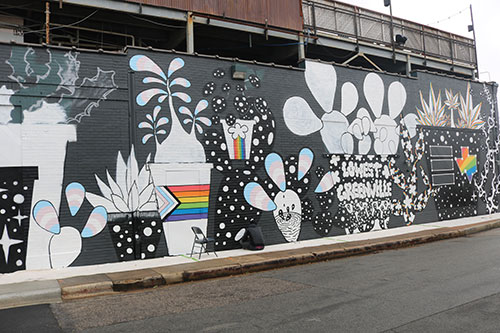 Heron said that although he was painting the wall for Equality Texas, it wasn’t a billboard for the organization. “That’s not what I do,” he said. “I’m not a sign painter.”

Equality Texas CEO Ricardo Martinez explained that in a year when all events — including Equality Texas’ signature Dallas fundraiser, Love, Equality — being forced to go virtual, he wanted something tangible to represent his organization’s message.

And he wanted it to be something people would love.

“We like to think about changing hearts and minds,” Martinez explained. That is what Heron’s work aims to do.

The artist pointed out pieces of the mural, including the progressive Pride flag, the classic Pride flag, the trans Pride flag, the Equality Texas rainbow Texas logo and some ambiguous black and white figures. Is that a cloud or a flower? A water droplet or a cactus?

“It’s the full umbrella,” Heron said. “My work is about resiliency.”

Heron has been painting murals since 2014. In the area, his work can be seen in Oak Cliff in the Bishop Arts District and in downtown Plano on 15th Street. He runs the Wild West Mural Fest in West Dallas, and in Fort Worth, he designed murals at Macy’s for the store’s window displays and did another mural for IBM. 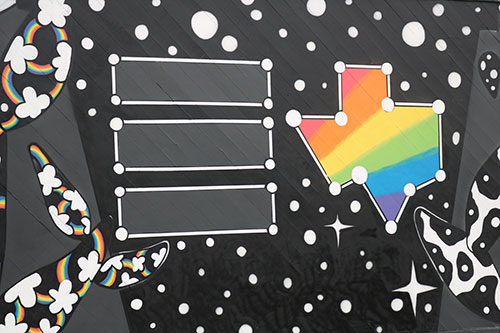 But while the corporate commissions pay more, he said, painting this mural was completely an act of love. He and his partner, Jorge Alcala, who describes himself as Heron’s “advanced colorist” and is helping complete the project, have been together nine years and have lived in the East Dallas neighborhood the past three.

“This one is the dream,” Heron said. “As a gay man living in the area, it’s personal.”

Heron said he believes art reflects a city’s values, and that “Public art is key to a city’s culture.”

Placing a rainbow-and-trans-themed mural in an area outside of Oak Lawn sends the message that the LGBTQ community is an integral part of the city as a whole, not just one neighborhood, Heron said. But, he added, he is worried about the effects of gentrification, pointing to his project in West Dallas. With such a stark contract between expensive new developments in the middle of one of the city’s poorest areas, he hopes his murals are a bridge between the two.

While COVID-19 has hurt most business, Heron has never been busier. The Love Equality mural is the fourth wall he’s painted this year. He both blames and credits the pandemic as being responsible for the previous business in the building closing and making the wall available to paint. 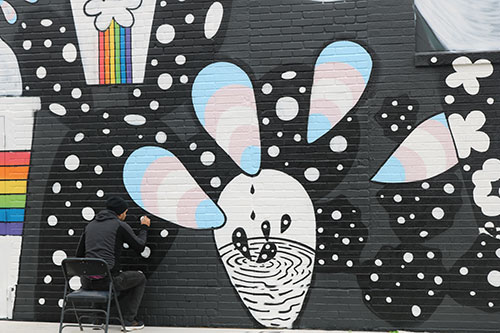 The mural should be complete by Valentine’s Day and will remain through at least Pride month. Heron said he hopes it’s embraced by the neighborhood and remains beyond June.

Heron has another LGBTQ project set to be installed this spring. His design won the Cedar Springs art panel competition that will be installed at the intersection with Knight Street. The two installations will stand three feet high; one will be 20 feet long and the other 40 feet long.

Meanwhile, as temperatures fell into the 30s through the week, completion of the Greenville Avenue mural in time for Love Equality became doubtful. Still, organizers hoped people participating in the event would stop by, take pictures of the almost-completed wall and share them on Sunday.

Marsha Dimes will emcee the Love, Equality brunch, and Martinez said he expects the program to run 50 minutes focusing on what Equality Texas will be doing this session.

But Love, Equality is more about fun than politics. Participants are encouraged to set up their cams in a place where they can get up and dance. And using an app called Airmeet, Martinez said the online experience is like mingling at an in-person event.

It’s a sort of speed dating event perfect for finding a match on Valentine’s Day.

For the current legislative session, Martinez would like anyone interested to sign up for every-other-Monday webinars during which he and staff explain what’s going on this session and how it affects the LGBTQ community. Lobby Days will be virtual this year and run from March 15-19. He said it’s difficult to get into the Capitol building, and the health and safety of the community is first and foremost.

Details are still being worked out, but Martinez expects to be able to run virtual skill-based training sessions that will include a meet-and-greet with the House LGBT Caucus. Then Equality Texas will schedule online meetings between small groups and legislators or their staffs. He said more information will be available soon as details are worked out.

Testimony at committee hearings, however, will mostly be in person, with individual committees able to make exceptions. Let Equality Texas, a member of the LGBT Caucus or your legislator know if you can travel to Austin and are qualified to testify on a particular topic.