Lisa Miller, mother in lesbian custody case, arrested after 12 years on the run 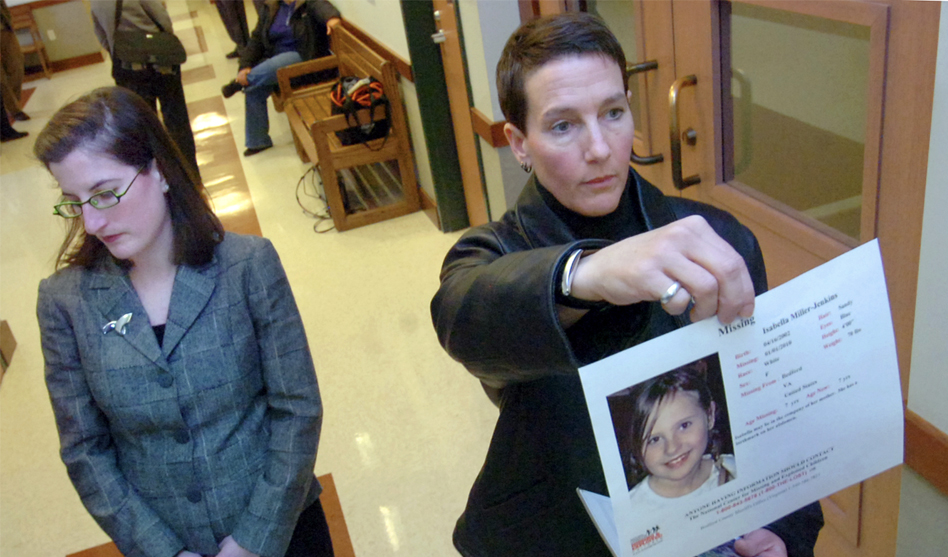 In this AP photo from 2010, Janet Jenkins, right, shows a photo of her daughter to reporters in hopes that someone would recognize the girl and tell police where she was, after the child’s other mother kidnapped her and disappeared to avoid court-ordered visitation with Jenkins. On the left is Jenkins’ attorney, Sarah Star.

More than 12 years after she kidnapped the daughter she shared with her former partner, Janet Jenkins, and ran away to Nicaragua to avoid handing over custody to Jenkins as mandated by the courts, Lisa Miller is back in the U.S., in custody and facing charges of international parental kidnapping and conspiracy.

News reports indicate that Miller and her daughter Isabella, now 18 years old, turned themselves in to the U.S. Embassy in Nicaragua after spending more than a decade evading the FBI, Interpol and Nicaraguan authorities on Jan. 19.

Miller, now 52, is now being held at a federal detention in Miami. According to the Southern Poverty Law Center, Isabella remains in Nicaragua.

The battle between Jenkins and Miller began in 2004 when the two ended their civil union, legalized in Vermont and Miller, who had converted to fundamentalist Christian faith, began refusing to allow Jenkins to see her daughter. The two began a legal battle spanning courts in two states — Vermont, where they had lived and entered into a civil union, and Virginia, where Miller moved to and where their relationship had no legal standing.

The Vermont courts awarded Jenkins visitation rights with Isabella, and the Virginia courts eventually upheld the Vermont ruling. But before the Vermont family court was able to rule on whether Jenkins should have custody, because of Miller’s repeated refusals to abide by the visitation ruling, in 2009 Miller took the girl and disappeared into Nicaragua with the help of individuals from her church.

Jenkins then sued Miller and the right-wing Liberty Counsel, which provided Miller with legal counsel, for interfering with her’s and Isabella’s rights. The courts then granted full custody to Jenkins, and in 2014, a federal grand jury in New York indicted Miller on charges of international parental kidnapping and conspiracy. Amish Mennonite pastor Kenneth Miller served two years in prison, Amish Mennonite missionary Timothy Miller spent eight months in custody and was, in 2017, sentenced to time served and parole. Neither man is related to Lisa Miller.

Businessman Philip Zodhiates was sentenced to three years in prison in 2017 for driving Miller and her daughter to Buffalo, N.Y., from where they crossed the border into Canada and then flew to Nicaragua.

Scott McCoy, interim deputy legal director with the Southern Poverty Law Center, which has followed the case and represented Jenkins, said that SPLC “expect[s] that [Miller] will be prosecuted for kidnapping to the fullest extent of the law.”

Sarah Star, Jenkins’ family attorney in Vermont and SPLC co-counsel, said that Jenkins was “relieved to learn of her daughter’s whereabouts but concerned that she remains in Nicaragua and did not return to the U.S.” with Miller.”

Jenkins, speaking through Star, said, “I just want Isabella to know that I love her very much and that I have never stopped loving her. Isabella has a family and support system here who will always welcome her home with open arms.”

Star continued, “When Isabella was born, Lisa and Janet named her Isabella Ruth Miller-Jenkins, after Janet’s mother, Ruth Jenkins. Grandparents Ruth and Claude Jenkins, as well as Isabella’s aunt and godmother, Linda Jenkins Garcia, are overjoyed by the thought that they will be able to see their beloved Isabella again. The Jenkins family wants Isabella to know that they have always kept prayer lists going for her, and she has never been out of their thoughts. The family longs for Isabella’s safe return and want her to know that they still celebrate her birthday and that her childhood bedroom is ready and waiting for her.”