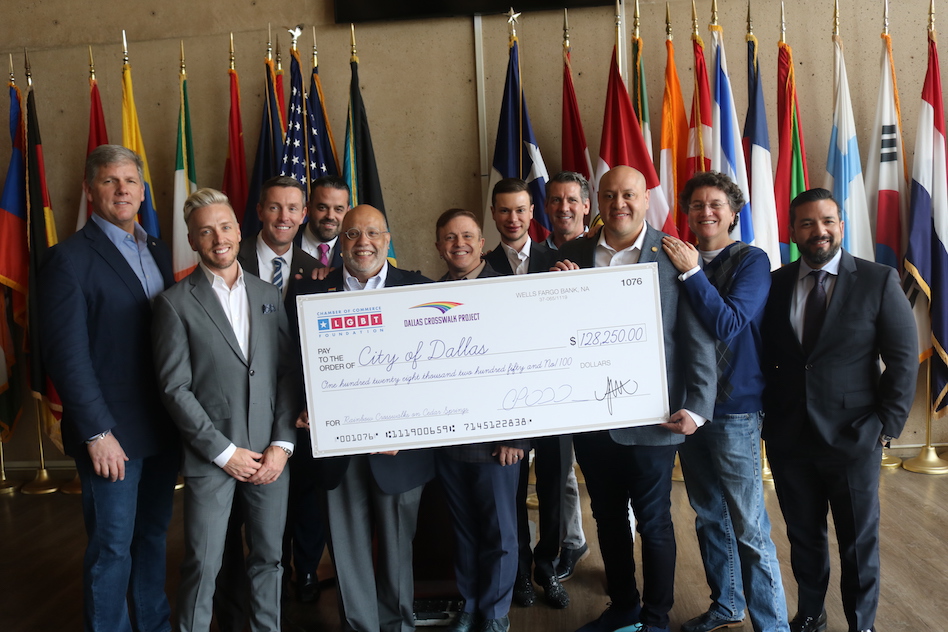 The LGBT Chamber presented city officials with a check for the rainbow crosswalks that will be installed on Cedar Springs Road. (David Taffet/Dallas Voice)

The LGBT Chamber of Commerce presented the city of Dallas with a ceremonial check of $128,250 to pay for the rainbow crosswalks that will be installed along Cedar Springs Road.

Additional money has been collected that the LGBT Chamber will hold to pay for upkeep to the crosswalks. Vedda said road crews and utility workers who dig up the street are required to return the road to its previous condition. Since that’s not gonna happen, the Chamber will maintain them.

Construction along Cedar Springs that includes new landscaping, new sidewalks, markers at each end of the entertainment district, new traffic lights and more began earlier this year and is scheduled to continue through the fall. Those upgrades to the neighborhood is being paid for by bond money. The crosswalks will be the last pieces installed and are entirely funded by donations.

Among the other corporate donors to the project are AT&T, Southwest Airlines, Andrews Distributing, Ben E. Keith Distributing, Comerica Bank, The Dallas Morning News, Oncor, Texas Instruments, Billingsley Co. and Beacon Advertising. Neighborhood businesses that contributed include The Hidden Door/Anthony Bobrow Trust, Hunky’s, Italia Express, The Round-Up Saloon and Street’s Fine Chicken. Visit Dallas, Communities Foundation of Texas and the Dallas Foundation and the Dallas Tavern Guild were among the organizations that donated to the crosswalk fund. A number of individual donors also contributed to the project.