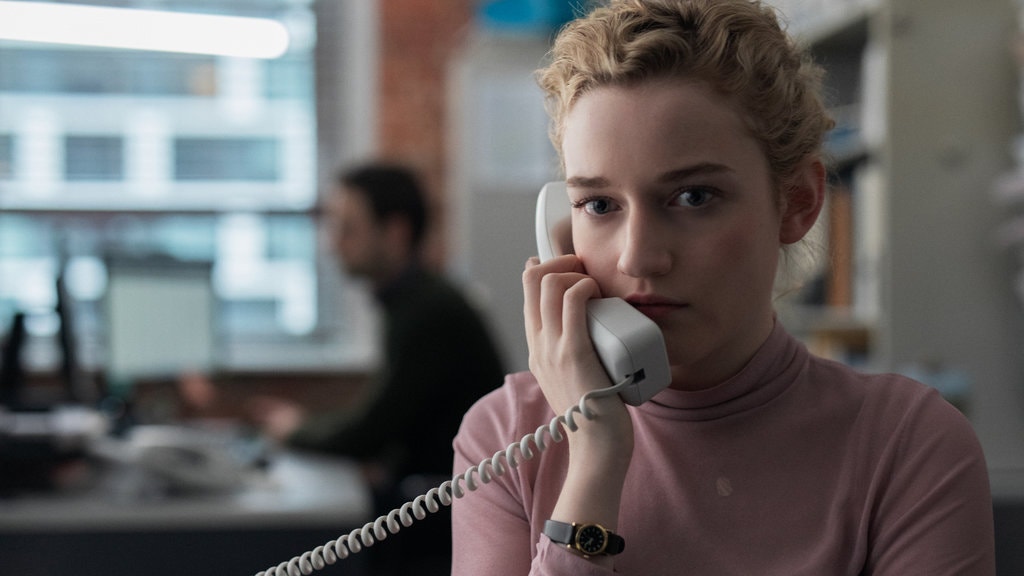 Jane (Julia Garner) is a low-pay, lower-prestige assistant to a powerful movie executive (we only hear him called “the chairman” in the office, and never see him). Like many entry-level workers, she gets stuck with annoying grunt jobs, from recording incoming checks to cleaning up the mess left by men (stealing leftover muffins since she barely gets enough time to grab lunch), to lying to a bitchy wife to protect her employer (and still getting in trouble for not lying well enough).

But though she’s meek and new, she suspects the parade of anonymous women may be doing more than “consulting.” And the exec may be a sleazy casting couch asshole who deserves to get #MeToo’d.

The Assistant is writer-director Kitty Green’s slow, abstract dissection of the Harvey Weinstein scandal, and a broader explication of how even well-intentioned and conscientious people can be bullied into denying the facts in front of them.

Where the film goes right is embodying the relentless grind of casual disrespect, unreasonable bosses and nosy coworkers who hover like Donald Trump as a debate. She’s tasked with menial jobs the men in her office would never think should fall to them (making coffee, fetching lunch orders), but is also shaken, as young women should be, to find the rules are stacked against them.

When she reports her concerns to Matthew Macfadyen (as the intentionally obfuscating H.R. drone), he badgers, interrupts and twists Jane’s reasonable concerns into a cudgel against her: maintain silence or risk career suicide. (He quickly takes a confidential meeting and rats her out, representing a conspiracy of coverups that feels more like The Parallax View or Three Days of the Condor than Bombshell.)

But The Assistant doesn’t wholly come together. Its coldness, and its generic production design, make it difficult to buy that this man is actually getting invitations to the White House. (If it were a comedy, some of the inconsistencies might play better; films like Downton Abbey and Parasite both found the satiric social critique in the haves/have-nots dynamic, and Neil LaBute has clinically tracked the casual bullying of corporate braggadocio since the 1990s.) It’s just 80 minutes, but it drags without a lot of narrative energy. Hints at becoming a thriller are red herrings — it never dives into the genre wholeheartedly.

Nevertheless, The Assistant does touch on the culture of complicity that allows predators to thrive in front of us. Garner, excellent in her weary calmness, conveys vulnerability and strength quietly. The excellent but underrated Bombshell told a specific story about actual events; this feels more universal and sadly relevant.