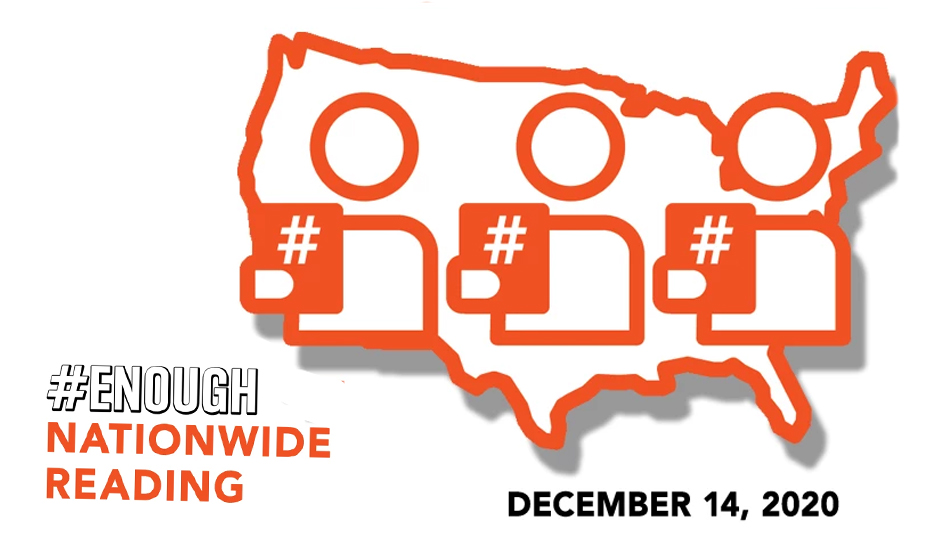 Kitchen Dog Theater, in collaboration with SMU/Division of Theatre, is participating in the nationwide reading of the seven winning plays of #ENOUGH: Plays to End Gun Violence, a national short play competition for middle and high school students. On Dec. 14, — the eight-year remembrance of the shootings at Sandy Hook Elementary — the winning titles will be performed live via the Zoom platform by current SMU Theater undergrads at Kitchen Dog as well as at 49 other theaters and schools across the country and abroad.

A panel of nationally-recognized dramatists including Lauren Gunderson, Academy Award winner Tarell Alvin McCraney, Pulitzer Prize winner Robert Schenkkan, Tony Award winner David Henry Hwang and Karen Zacarías selected the plays out of 184 submissions from 23 states and three countries in #ENOUGH’s call for teens to write 10-minute plays that confront the issue of gun violence. The plays are all written by high school students and all tackle gun violence through different lenses, from the threat of and anxiety over school shootings, to police shootings, to community violence, to issues of race to gun culture in American history.

#ENOUGH has made the plays available for free to schools, theaters and community organizations to stage a reading of them, either virtually or in-person where possible, and follow that reading with a post-show discussion on gun violence specific to their community.

“We can’t talk about gun violence in America only in the aftermath of the most tragic incidents,” said Michael Cotey, producer of #ENOUGH. “Through the Nationwide Reading we’re allowing every community to create the space and address the impact of gun violence now.”

KDT Co-Artistic Director Tina Parker said, “I am proud Kitchen Dog is able to host this important nationwide event for our community. Frank conversation and taking action now, no matter how difficult or uncomfortable it is, can truly save lives later.”

#ENOUGH: Plays to End Gun Violence is a one-time only, COVID-safe event and will be performed live via the Zoom platform on Monday, Dec. 14 at 7 p.m. The performance will be followed by a live interactive talkback with artists, students, local activists, and the audience on how gun violence impacts our community.Tickets are $9.99, $4.99 for students, and are available by calling 214-953-1055 or online here. Fifty percent of ticket sales will go to the North Texas Chapter of MOMS DEMAND ACTION, a grassroots movement of Americans fighting for public safety measures that can protect people from gun violence.