It’s going to be a bumpy Congress 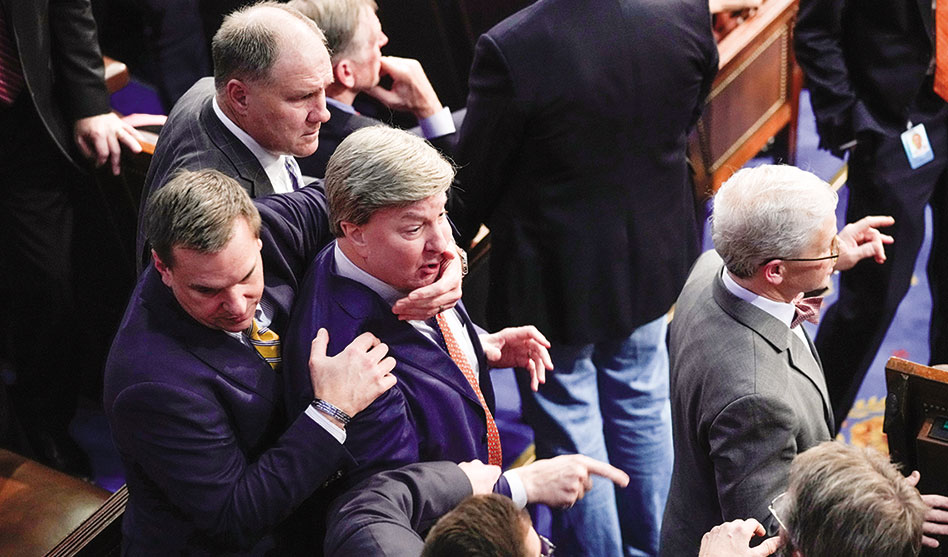 The Honorable Donald J. Trump of the State of Florida has received one [vote],” said Clerk of the House Cheryl Johnson as she announced the results of the 11th ballot for Speaker for the 118th Congress. This despite Trump having endorsed Kevin McCarthy.
Setting aside the former president’s total lack of honor, that was one of my favorite moments from the GOP’s intra-party fight in Congress last week. Another was a photo of Rep. Katie Porter, D-Calif., reading The Subtle Art of Not Giving a F*ck.

C-SPAN camera operators, unconstrained in the absence of anyone in charge, captured images of activity on the House floor that we wouldn’t normally see. After the 14th ballot, Rep. Mike Rogers, R-Ala., nearly started a brawl with obstructionist Rep. Matt Gaetz, R-Fla., and was pulled back. Rep. Matt Rosendale, R-Mont., waved away a call from Trump (“DT”) that Marjorie Taylor Greene, R-Ga., tried to hand him.

Like other demagogues before him, Trump has unleashed a beast he cannot control.

Minority Leader Hakeem Jeffries, D-N.Y., was the antidote to Republican chaos. He consistently received unanimous support from Democrats. The nominating speeches for him before each ballot told of all the things Democrats accomplished for the American people in the previous Congress.

Rep. Cori Bush, D-Mo., tweeted that Rep. Byron Donalds, R-Fla., an alternate Speaker nominee with a Tea Party and election-denying background, “is a prop.” Republicans were indignant. But what else caused Donalds, one of the few black GOP House members, to be pushed forward after being ignored previously?
Across the aisle, Jeffries has been a leading House Democrat. If Republicans see their Black colleagues as more than props, why did they oppose the John Lewis Voting Rights Act?

All week, Democrats illustrated what Sen. Mitch McConnell calls “candidate quality.” Jeffries was pitch-perfect in his gay-inclusive remarks before presenting the gavel to McCarthy in the wee hours of Saturday morning, Jan. 7. While Republicans lie to their base and use the inflamed reaction to justify their mischief, Democrats continue to demonstrate their seriousness about governing for all Americans. They should be sure to communicate as clearly with voters about it as Jeffries.

McCarthy, in his first address as Speaker, included in his culture-war priorities a pledge to stop “woke indoctrination in our schools.” The GOP equates any teaching of tolerance with predation. This is ironic considering that Gaetz sought a pardon while being investigated for sex-trafficking a minor.
Projection doesn’t just happen in movie theaters.

Rigid and intolerant attitudes toward learning are nothing new. McCarthy became speaker on the 413th anniversary of Galileo’s letter about his discovery of moons orbiting Jupiter, which confirmed the earlier work of Copernicus and contradicted Catholic Church doctrine that the Earth was fixed at the center of the universe. This got Galileo into a great deal of trouble.

Now Republicans are eager to grill Dr. Anthony Fauci over the origins of COVID-19 as part of their conspiracy-mongering over China. (Although I’m not sure why they want to take him on considering how deftly he has parried Sen. Rand Paul, R-Ken.)

Like the 17th century Vatican, MAGA leaders regard their dogmatic certitude as far superior to the cautious, incremental discoveries of science. Thus Fauci, who recently retired as director of the National Institute of Allergy and Infectious Diseases, is derided and attacked because our knowledge of COVID has grown over time. By contrast, self-described “stable genius” Trump once recommended ingesting bleach as a cure.

Given House Republicans’ predilection for revenge over governance, they may refuse later this year to raise the debt ceiling, which is about paying for debts already incurred, not new spending. Defaulting on our debt would be catastrophic; but ruination appears to be the main goal of the insurrectionist GOP.

Too often we talk as if we all have shared values, despite considerable evidence to the contrary. Why should the most radical 10 percent of House Republicans care about the views of the other 90 percent when they didn’t care about the votes of the majority of Americans in the 2020 election?

Nevertheless, congrats to McCarthy on his elevation, though that seems an odd term considering how much he debased himself to get it. No good can come from a legislature being held hostage by aggressively ignorant saboteurs who treat government as an enemy. They are the burn-it-down caucus. To paraphrase Bette Davis, fasten your seatbelts. It’s going to be a bumpy Congress.