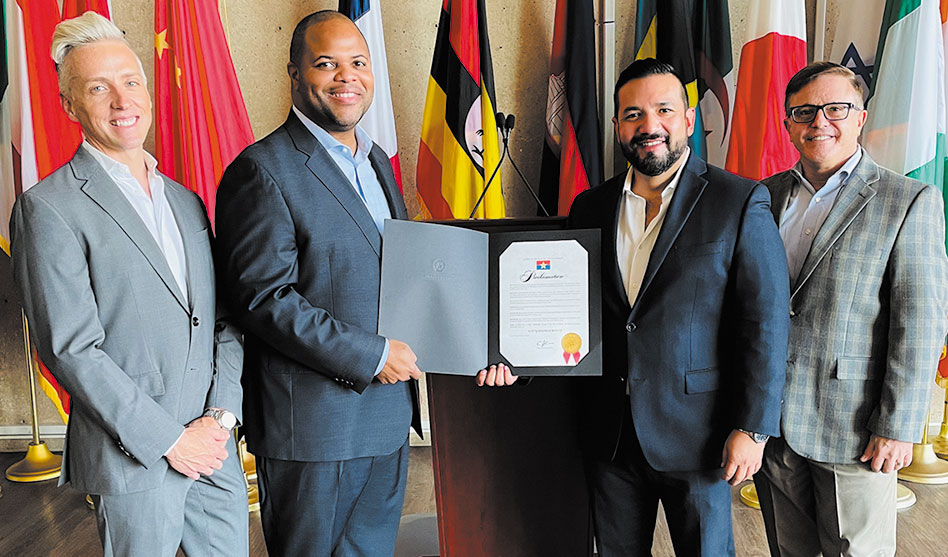 Since the beginning of September, both the Dallas City Council and the Dallas County Commissioners have issued proclamations recognizing this as LGBTQ Business Month, at the request of the North Texas LGBT Chamber of

Commerce. The proclamations, explained Chamber President and CEO Tony Vedda, are intended to both honor and urge support for the many LGBTQ-owned businesses that help the Dallas-Fort Worth Metroplex grow and thrive.

“We wanted to bring a focus to how these LGBTQ-owned businesses support the economy here in North Texas,” Vedda said.

Gary Sanchez, chamber board chair and director of public affairs at VisitDallas, said the chamber estimates that LGBTQ-owned businesses in Dallas “contribute more than $30 billion to the local economy. … It has been well documented that small businesses are the backbone of any community. They create more than 1.5 million jobs annually, about 64 percent of new jobs created in the U.S., and they employ nearly 50 percent of all workers in the U.S. We think that is worthy of recognition.”

Vedda said those figures are a conservative estimate extrapolated from a wide-ranging economic study conducted by the National LGBT Chamber of Commerce and based on surveys of LGBT-certified businesses (businesses certified by the National LGBT Chamber to be majority owned by LGBTQ individuals as part of the chamber’s LGBT Supplier Diversity Initiative).

Vedda said North Texas LGBT Chamber officials had “looked at the city of Dallas and the county of Dallas, at the LGBTQ population here and our spending power, along with the number of what we assume to be LGBT-owned businesses and what their economic output is.” In the end, he said, as noted in the proclamations, they determined that Dallas has the largest LGBTQ population of any city in Texas, and that that population has a combined buying power of more than $4 billion.

And, he added, the chamber estimates that there are about 4,000 LGBTQ-owned businesses in Dallas with a combined gross output of more than $1.5 billion.

Vedda said that the idea for recognizing LGBTQ Business Month started a couple of years in talks between him and Tammi Wallace, cofounder, president and CEO of the Greater Houston LGBT Chamber of Commerce.

“Tammi and I talked about how there is no recognition of our LGBTQ businesses, and we felt like we needed to do something about it. And this year, I just decided this was the time to ask the city and the county for these proclamations.

“It would be nice to do something statewide, but with everything going on, it’s just not the time for that,” Vedda continued.

“And the Houston chamber is celebrating their 5th anniversary this year, so they decided to hold off for now. Next year, hopefully, we can include Houston and maybe even the chambers in Austin and San Antonio, too.”

Over the last year and a half, as the COVID-19 pandemic has raged across the country, Vedda said that LGBTQ-owned businesses — just like every other business — have suffered. “The LGBT bars — the gay and lesbian bars everywhere — have all had a really hard time, and personally, I find that very sad. Because for so many people, the bars were their first entry into the community. For so long, the bars were our only safe havens.

“I don’t know of any LGBT bars in Dallas or Fort Worth that have [permanently] closed because of the pandemic, but they have all suffered — as have our restaurants. Our restaurants have really had to traverse a minefield through this pandemic.

They still are,” he said. “Some businesses have not been affected as much, but others have been greatly impacted. Cleaning services, for example, came to a grinding halt when everything started shutting down and people left their offices to work from home.”

Through it all, Vedda said, the North Texas LGBT Chamber has worked diligently to find ways to help its members survive and stay connected. The chamber has worked with the Small Business Administration to help chamber members access the SBA’s programs, grants and loans, and the chamber has found ways to keep its own programs and groups accessible through virtual events and online efforts.

The SBA has a new program coming specifically for restaurants that the chamber hopes to be able to announce soon, he added. And in addition, the chamber has chosen not to drop members during the pandemic, even if those members were not able to continue to pay membership dues.

Vedda said that the chamber, like any other small nonprofit or business, has been working hard to keep things going through the pandemic, and that work continues. “Like everybody else, we are listening to the physicians on TV and to our local experts — Dr. John Carlo at Prism Health North Texas is a wealth of information — but I think everyone is at least a little cautious at this point. We all want to think the worst is over and that we will get back to normal soon. But seeing how this Delta variant has grabbed hold — especially among the unvaccinated — people are still being very cautious.”

That’s why, he said, the chamber chose to cancel the awards luncheon that had been planned for mid-September.

The chamber’s small groups had started back with in-person meetings in July, but the annual awards luncheon was a different matter, Vedda said. “We held an awards luncheon in January of 2020. That was our last big event before the pandemic hit,” he said.

After people began getting vaccinated at the first of the year, and the severity of the pandemic seemed to be easing some, chamber officials decided to schedule the 2021 luncheon for September. But then came Delta.

“So we decided to nix the luncheon and plan a virtual event instead.” Now the chamber is planning for a virtual event to take place live on Friday, Nov. 3, from 10-11 a.m. Video of the event will be rebroadcast later for those unable to watch the first time.

The delay, Vedda said, “gives us time to expand the awards and work on some really cool things for the virtual event.”

In the meantime, Vedda encouraged everyone to do what they can to support the community by supporting LGBTQ-owned businesses whenever possible.

“We want people to remember that for just about any goods and services they need, there is most likely an LGBTQ-owned business that can serve that need,” he said, suggesting that individuals check the chamber’s website, the Dallas Voice website and the Dallas Business Journal’s annual list of top LGBT-owned businesses in North Texas.

“The chamber’s mission is to achieve equality for businesses, and the easiest way to do that is for people to support LGBTQ-owned businesses,” Vedda continued. “Always look for and support those LGBTQ businesses and the businesses that contribute to and support our community.”