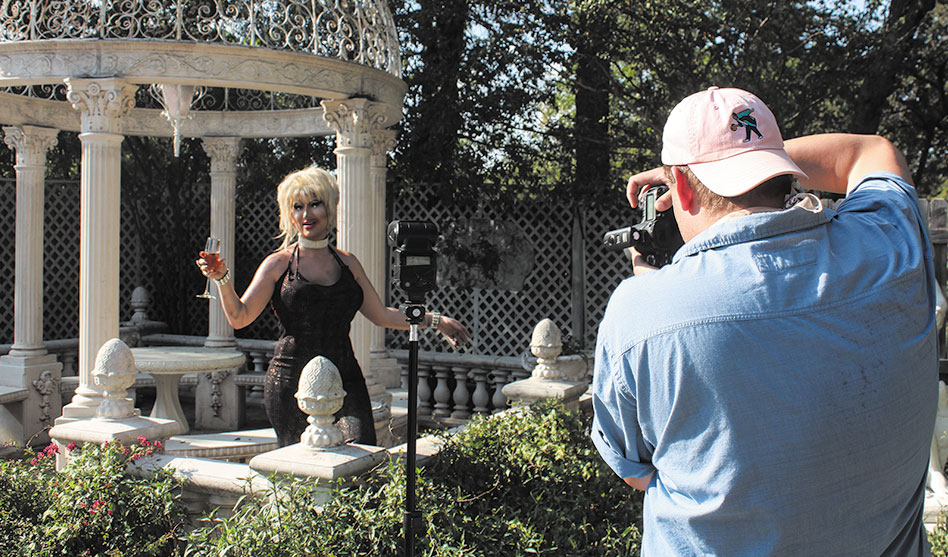 During the photo shoot for the cover of this week’s issue of Dallas Voice, Mark Mayr handled the camera. His approach was efficient and fairly quiet. He moved his equipment with stealth. He set up his lighting quickly, and he was ready to go. 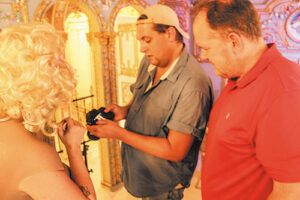 But while he may be under the radar, his eye searches for photos that are anything but.

“My aesthetic is a mixture of loud colors, but with a clean, solid destination point,” Mayr said.

All of that was easy in the Dreamhaus, a special venue located in, of all places, Everman, Texas just south of Fort Worth.

Inside are all the colors Mayr needed — from aquamarine walls to a deep red bathroom.

But it’s his subject that helps bring his pictures together. And that subject is local drag queen Bleach.

Bleach is Mayr’s muse, and they’ve created magic together many times as photographer and subject. This week, they brought that magic to the Dallas Voice cover shoot.

“We wanted to make a vignette of different characters that Bleach embodies,” said Mayr. 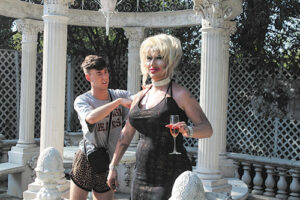 “Thinking about the Dreamhaus, we looked at what was here and what story we could tell,” Mayr said.

Inspired by the likes of photographer David LaChapelle, Mayr used the bright and bold colors of the art house studio to bring Bleach to life in a variety of complex female roles — from high fashion to high camp. For this cover, the two pulled inspiration from Vogue magazine, specifically those issues of Vogue featuring Lady Gaga.
Mayr has been shooting since he was 15. But it was this past pandemic year that seemed to get him back on track with his photography.

“I definitely got a kickstart,” he said. “There was a lull, but I wanted to make this thing happen.

“I know I can make this photography dream come true. So I got all my equipment together, and I’ve been freelancing.”

With his aesthetic perpetuated by his muse Bleach, Mayr is hardly short on subjects in North Texas. Likely when you catch Mayr shooting, he will be shooting drag queens. He’s been taking drag pics and Polaroids for almost a decade.

“I’ve always been fascinated, because with drag, you start from the ground up,” Mayr explained. “That persona comes from a place they create and build. Plus, when they’re in drag, people are at their happiest.”

He would know. His own alter ego is drag queen Frida Monet. As Frida, Mayr performs primarily at Urban Cowboy in Fort Worth and with the comedy group Claws Out Comedy.

“She’s just a trash queen,” Mayr said of Frida. “Mainly what I do is mic work and wear leopard print dresses.”

Whether because of his own drag or because he takes so many photos of other queens, there is a symbiosis going on within his work.

“I’m working on a character series that challenges a bit what drag is for me,” Mayr said. “I have these messy, haphazard characters who are based on people I’ve seen growing up in suburban white Texas.”

There is perhaps something to be said about the fact that the Dallas Voice cover shoot was in the type of suburban, white city he describes, yet inside a house where there is an entirely different world where Mayr can photograph a man wearing $600 silicone boobs.

“Yeah, we did that,” he said with added excitement.

Part of Bleach’s approach to the photo shoot for this week’s cover of Dallas Story was to tell a story of who she is. Bleach (nee Aubry Roach) and photographer Mark Mayr were intent on having the shoot be more than just fabulous photographs. 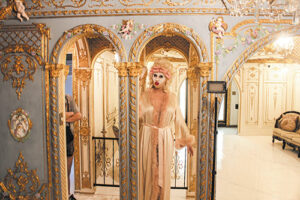 And while this wasn’t necessarily Bleach’s life story, it was indicative of her complex take on drag.

“I really wanted it to be as if Bleach lived in these shots, from the bedroom to me with the mask,” she said.

Bleach and Mayr work off each other with such strong intuition, getting inspiration from high-end fashion magazines and creating a high-fashion photo spread — while adding their own special twist — was a snap.

Scrutinizing “a ton of art and photography books,” they found their references, but Bleach’s own ideas elevated them into some elegant drag camp.

“I like having some control creatively,” the 28-year-old drag performer said. “We do this dance though. He gets creative where I get meticulous, but it’s a nice balance.”

The Bleach and Mayr have known each other for six years. They hit it off immediately when Bleach was booked on Mayr’s show (which he presents as his drag alter ego Frida Monet) in 2015.

“We were doing little shoots in the bedroom, just creating some stuff,” Bleach said. “But over the last two years, we’ve really elevated our ideas to make photos we were both proud of.”

Roach’s obsession with blonde bombshells led him to create Bleach. Anna-Nicole, Pamela Sue and Dolly are his icons.

But the blond bit is merely a part of a deeper, much more complex Bleach.

“I feel like I have a broad range,” she said. “I was never the girl who wanted to perform a Britney number, but I found joy in a way to do that. I do a lot of more bizarre numbers, but when I need to pay the rent, I throw in a Dolly or Britney number.”

Bleach prides herself on being a chameleon and being able to read the room. This is, perhaps, a tool in every experienced drag queen’s skill set, but for Bleach, it lends to her evolution.

“Every day is a constant evolution. I’m changing every single day. Anytime you have that much presentation going on, it gives off new vibrations, and people feel that,” she said. “There’s a part of me that comes to life but also takes on a new life.”

If it wasn’t for drag, Bleach — er, Roach — would be a completely different person far removed from the world of drag.

Dressing up, he said, changed who he was inside.

“It’s made me more uninhibited, which I apply to daily life. I’ve always been a head-down, not-say-anything kind of guy. and I think drag has allowed me to speak up for myself and assert my point of view.”

That same spirit has also kept Bleach busy. This October marks the queen’s “third or fourth” year doing drag professionally as a full-time job. These days, she’s often performing in the Rose Room; she’s part of Double Trouble with

Raquel Blake every Tuesday at JR.’s, and she’s a staple at drag brunch events throughout Dallas and Fort Worth. One recent Saturday, she said, she had three shows and was in drag from 10 a.m. to 3 a.m.

“I get so tired because I am a workhorse, and it can get intense,” Bleach said. “But you know, I’m so lucky to be doing this. I love being in drag.”

She also loves being a cover girl for Dallas Voice.

“Well, I love doing photos, and I was excited to not just focus on one image,” she said. “I’m so excited and grateful for this opportunity. My friends like Cassie Nova and Raquel Blake — they’ve been on the cover, and now I get to join those ranks!”

This must be a dream!

If you’re looking at more than Bleach on the cover and in the “cover shoot” photos here on these inside pages, who can blame you? The setting for the shoot is a dream — a Dreamhaus, in fact.

And what else could you ask for in a Dreamhaus? The interiors are bold, colorful and fabulous and right here in North Texas. Everman, Texas to be exact.

That’s just south of Fort Worth. nestled in a little nook southeast of Interstates 20 and 35W.

Words to describe the Dallas Dreamhaus are hard to find. It’s a photo studio; it’s an illusion; it’s a home. It’s pure fantasy.

On the outside, it looks like any normal house on a small town street that’s not far from a run-down strip mall and a lonely memorial park. The neighborhood is modest and quiet. The cars and trucks line the streets and driveways.

But when that door opens, it is like being shot at hyper-speed into a rococo dream — which makes the name make sense.

From that moment, your eyes are drawn to every inch of this insane house. It is three bedrooms, two baths and a kitchen, along with main rooms, all filled top to bottom with gold trim, cherub statues, moulding, chandeliers and ornate wallpapers in a multitude of colors.

Owner Rachel Page brought the place into her fold as the Dreamhaus alongside her other colorful spot, the Dallas

Dollhaus. They both serve as backdrops for photo and video shoots while Dreamhaus can also serve as an event venue.
See the place for yourself on Instagram at @dallasdreamhaus. It has to be seen to be believed.