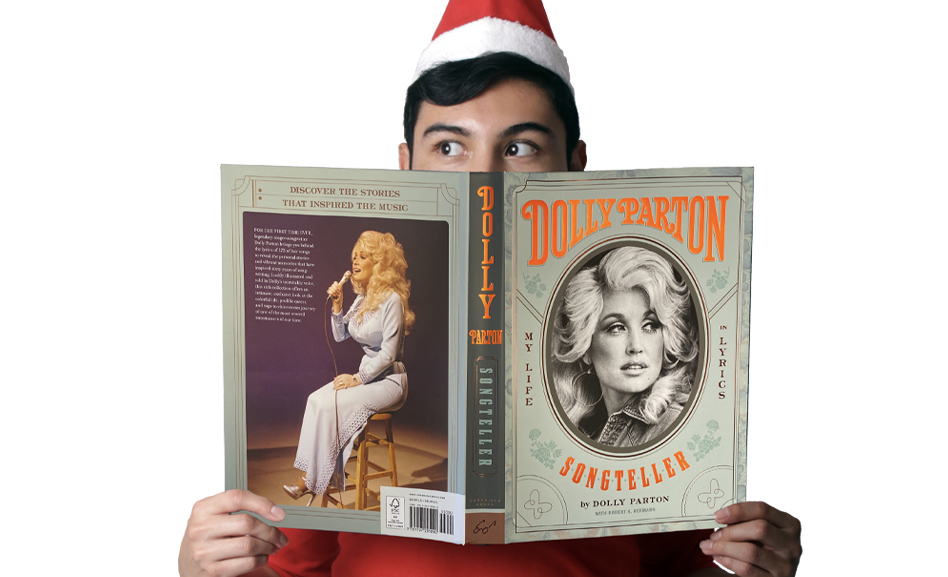 Dallas Voice’s Elf on a Shelf, Angel, couldn’t wait to get his hands on the new Dolly Parton memoir!

There are no two ways about it; Dolly Parton is a national treasure. And most of us probably think we already know all there is to know about the tiny little lady with the great big … hair … from Sevierville, Tenn. We know that she used to sing with Porter Wagner at the Grand Ol’ Opry. We know she had a huge pop hit singing “Islands In The Stream” with Kenny Rogers. She has had 25 RIAA-certified gold, platinum and multi-platinum awards and a record 26 songs hit No. 1 on the Billboard country charts. And we know that she wrote many of those songs herself, telling the story of her life one lyric at a time.

Now, though, we have a chance to let Dolly herself tell us the stories in her new memoir, Dolly Parton, Songteller: My Life in Lyrics, written with Robert K, Oermann.

In this just-released book, Dolly has chosen to highlight 175 of the songs she has penned in her more than 60 years as a songwriter, taking her fans inside the songs to share the stories behind the lyrics. She has also included a plethora of previously-unpublished photos and memorabilia to create a must-have treasure for every Dolly Parton fan and every country music buff.

Dolly Parton, Songteller: My Life in Lyrics is published in hardback by Chronicle Books. It has 380 pages and retails for $50. You could buy the book online, of course, but why not spend your dollars locally and help a DFW brick-and-mortar bookstore. You can find Songteller at Interbang Books, 5600 W. Lovers Lane, #142 in Dallas, and at Monkey & Dog Books, 3608 W. 7th St. in Fort Worth.