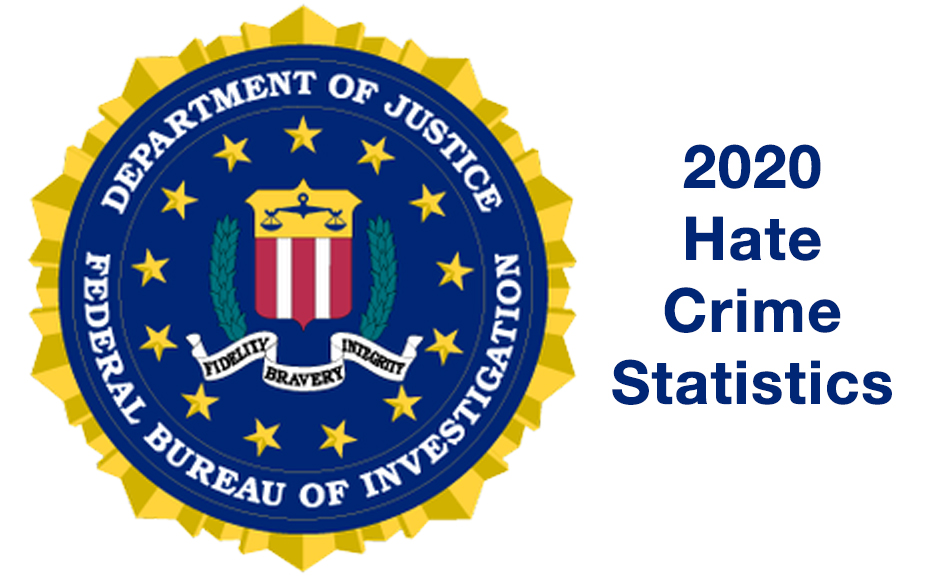 There were 7,759 hate crimes involving 10,528 victims reported in the U.S. in 2020, the highest annual tally in the last 12 years (since 2008, when 7,783 hate crimes were reported to the FBI), according to an FBI report released this week. But as NPR notes, experts and advocacy groups say the real number is likely higher than that.

The NPR report says the 2020 numbers follow a recent upward trend in hate crimes, and that it was a 6 percent increase over such incidents reported in 2019.

There were 205 multiple-bias hate crime incidents that involved 333 victims.

Jonathan Greenblatt, CEO of the Anti-Defamation League, said in a statement, “While these numbers are disturbing on their own, the fact that so many law enforcement agencies did not participate is inexcusable, and the fact that over 60 jurisdictions with populations over 100,000 affirmatively reported zero hate crimes is simply not credible.”

There has also been a rise in reported hate crimes targeting Asian people. “The national coalition Stop AAPI Hate received 9,081 incident reports of bias incidents against Asians and Pacific Islanders between March 19, 2020, and this June. The sudden increase … was attributed in part to the scapegoating of the Asian community for the emergence of COVID-19, which originated in China and which former President Donald Trump called the ‘Chinese virus.’” NPR reports.

At the same time that the FBI was releasing its alarming statistics, the Movement Advancement Project and 16 other civil rights organizations were releasing a new report providing “a groundbreaking analysis of state and federal hate crime laws.”

The report finds that federal and state governments vary widely in their responses to hate violence, creating a complex patchwork of laws and protections that means that “someone who experiences a hate crime may have a completely different set of protections, options or access to resources depending on where the crime occurs,” the press release points out.

The report analyzes state hate crime statutes across more than 10 distinct characteristics. The common element across state hate crime laws is the use of criminal punishment, typically through sentencing enhancements.

The report notes that current hate crime laws focus on punishing offenders and fail to address root causes of violence or challenge underlying biases at the individual and broader societal levels. “Additionally, harsher sentencing has not been shown to deter crime,” the MAP press release says.

The report also points to “widespread bias in the criminal justice system,” which results in “significant racial disparities, as well as disparities for LGBTQ people, people with disabilities, and low-income people,” the press release says. “These are often the very communities that are targeted for hate violence. Evidence shows that, for example, even though the majority of hate crimes are committed by white people, many states’ law-enforcement-recorded hate crimes disproportionately list Black people as offenders.”

The report says that flaws in hate crime data collection and reporting “are widespread, and the current system of federal data collection relies only on the voluntary participation of law enforcement. Additionally, victims of hate crimes may be wary of reporting the crime to the police if they do not trust the police.”

The report highlights opportunities for both improving hate crime laws and better supporting communities affected by hate violence. Suggestions for doing so include: