Giving the gays something to talk about 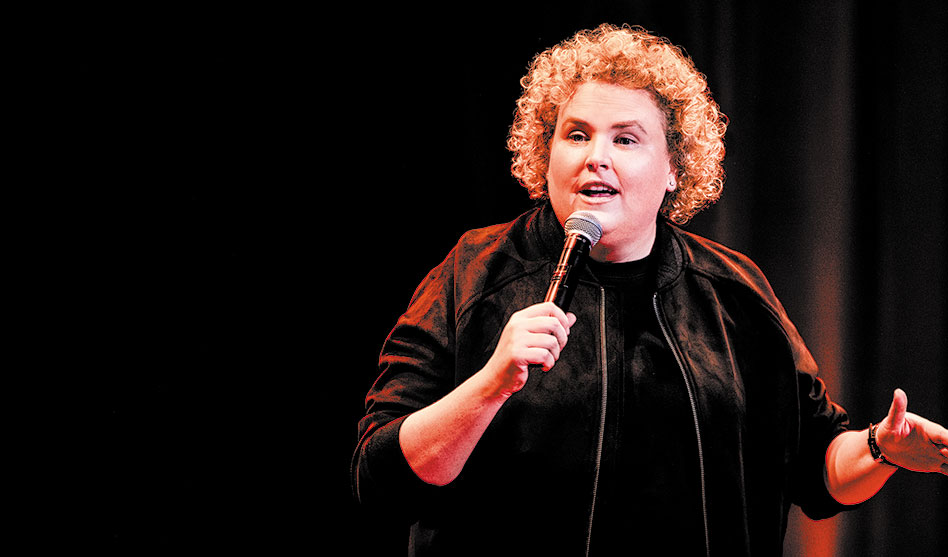 Fortune Feimster on her pandemic success, going hard on the wine and getting closer to an even bigger break

Fortune Feimster’s mouth has been going and going and going. “I talk a lot right now,” says the Southern comedian who hails from North Carolina, coughing and clearing her throat as we — that’s right — talk on Zoom.

In addition to a daily radio show and her weekly podcast, Feimster, who rose to fame as The Person You See Everywhere in Bit Parts (including Chelsea Lately, The Mindy Project and The L Word: Generation Q), has been doing press to talk about the projects she’s a part of that have all come out during the pandemic to satiate our need for existential relief.

Aside from her own Netflix comedy special Sweet and Salty, she can be seen hamming it up in a steady flow of films: Barb and Star Go to Vista Del Mar, Chick Fight, Friendsgiving and Yes Day, a Jennifer Garner-led family comedy also for Netflix. On TV, she stars in Kenan Thompson’s NBC sitcom Kenan and voices multiple characters on the Fox animated series Bless the Harts.

The pandemic has been good to her booming acting career, but also to her love life: Feimster married wife Jacquelyn Smith in a small ceremony in October. She says it’s made her an even bigger fan of Michigan, given that Jax, as she calls her, is from the Mitten State.

During our conversation, Feimster, yes, talked some more — this time about how her character in Yes Day might actually be gay, being drawn to the insanity of Barb and Star and feeling like, at last, Hollywood might be ready for her to go from bit part to big part.

Dallas Voice: How are you doing? I feel like, finally, there’s some light at the end of the COVID tunnel. Fortune Feimster: I’m doing a lot better. It does feel a lot more hopeful, thank goodness. I mean, it’s been a doozy. I can’t believe it’s been a year. I think we’re all thinking back to, you know, where were you when Tom Hanks got COVID? (Laughs.)

Shit got real at that point. It got real. I don’t know why it took that. That first half … you know, I was supposed to go on this big tour, and my first tour date was actually going to be Grand Rapids on March 15, and they canceled it the night before I was supposed to leave. We were so excited to go to Michigan, ’cause all [Jax’s] family was coming in. But then it just kept going and kept going. (Laughs.) And everybody had to kind of make the most of it. But no one was, like, having a great year, so you have to think and realize the whole world is going through this really hard time. And I think we’re getting through it, so I’m feeling optimistic.

A year ago, it was like, “OK, 14 days. Just stay in your apartment. Don’t leave. And then it’s gonna be over.” Yeah, we were so naive. We were rescheduling shows for May of last year, which seems laughable now, because we’re still trying to figure it out for fall of 2021. I was lucky I got to hunker down with my lady Jax and my dogs. My pets — that’s who got us through this time, for sure.
Are you still on the bottle-of-wine-every-other-day regimen? I got better. That was definitely the first, like, four months. We had to finally be like, “OK, maybe not every night. Maybe once every couple days.” Thank god Hollywood started trying to get back rolling [in], I want to say, October or so. So I’ve been really lucky the last few months to be working again. And so, I feel some normalcy when I go to work, even though it’s very different at work. Everyone’s masked up and [in] face shields. It’s a different environment, but whatever it takes to get to do it. 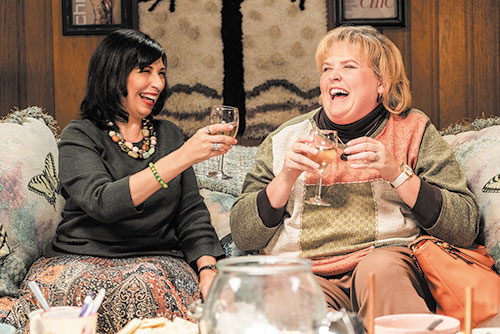 What kind of projects are you working on right now? I just wrapped the sitcom Kenan for NBC. I have a recurring role. I did not foresee that one coming, so that was a nice little cherry on top. I’ve been doing The Netflix Afterparty, which is really cool, with David Spade and London Hughes. And then I had all these movies — I think I’ve had five movies — come out in the last six months, which is crazy, but it’s because I filmed all of them before the pandemic, and they all got held up; the release dates got pushed. They were supposed to originally come out at different times and then, all of a sudden, it was just like, release the movies! (Laughs.) People are like, “You’re everywhere.”

You seem to pop up in the most random of places. You’ve played janitors, grave diggers, a fairy gay mother … . Now I need Hollywood to let me do more than be the fun pop-up that brings some laughs. I’m ready to really sink my teeth into some bigger roles. So hopefully that’s coming. … I do a lot of development; I do a lot of writing; and I’ve sold a couple movies to Amblin [Entertainment]. In the past I’ve sold TV shows to ABC. So I’m trying to get one of those movies off the ground that we’ve written. We wrote another movie in quarantine that we hope to pitch around. I created those TV shows because I was trying to give myself an opportunity to, like I said, be a bigger part of a show.

And I got to film my pilot for ABC, which is really cool, even though that didn’t move forward. It eventually led to me doing The Mindy Project. So now with movies, I’ve been kind of focused on writing movies, because I’ve been lucky to be in a lot of movies, especially lately. Sometimes in Hollywood you just have to write that yourself.

I love it. That was one of my favorite movies to do. That was such a treat, seeing that come out. The only bummer is, that’s a movie you want to see with a house full of people in a theater. It’s one of those movies, I think, that is infectious, ’cause people are laughing, [and] it makes other people start laughing, and you’re all laughing together. So I’m glad it came out [so] people can enjoy something silly during quarantine. But hopefully — I don’t know if you can, like, release the movie online and then also put it back in the theater.

The movie’s gonna live on in gay cult film culture anyways, so every year, actually, it should get a theatrical release. I hope so. It does seem that gay men in particular really took to that movie, which makes me so happy. People either loved it and are obsessed with it, or they were like, “I hated it. I turned it off after 20 minutes.” And I just wanted to be like, “Well, maybe you aren’t the target audience.

Did you know what you were getting yourself into when you signed up for that movie? I knew that my part was pretty subdued. Like, we were the Talking Club and that we were sitting around, talking about ridiculous stuff. I was on a plane and I read [the script], and I was cry-laughing reading this. Most scripts you’re just kind of going through like, “Yeah, that’s cute. That’s cute.” You know? But this had me crying. So I knew the movie was insane, and I was like, “God, how are they going to pull this off?” And I was like, “If they’re asking me to be in this movie, I’m being in this movie. It’s the best thing I’ve read in so long.”

In Yes Day, you play Jean, the paramedic. Is it safe to say that you probably shouldn’t be, um, driving an ambulance? One-hundred percent, I should not be. Yeah, Jean [owns a] fleet of ambulances, even though she sucks at driving that one. It’s always fun to pop in as these characters, like you said, that kind of just are a little off. That’s kind of my brand of humor. And I love this movie, ’cause, well, first off, Jennifer Garner. I’ve been a fan of hers for so long. And I was nervous to meet her just because she’s done so many projects and is still in my category of “movie star,” which you don’t have as many these days. And she was so lovely. In my very first scene with her I had to drive the ambulance. And I felt like Jean because I was … I didn’t know. I mean, they teach you how to work everything and they make sure you’re comfortable, but I’m trying to do my scene and, like, pull the air brakes and do the siren, and it was just like walking and trying to rub your head and your stomach at the same time. It was a lot to sort of figure out, having just met Jennifer Garner.

What’s the history between you and the other ambulance driver, Karen, in the movie? Because I get the impression that they could have been a couple. I mean, you took her life savings. I know. I feel like they were alluding to … I mean, they never told me what their actual relationship was, if it was a relationship, if it was best friends, if I was her best friend and took her life savings. Uh, then that’s a really bad friend. If it’s her partner, then that’s OK. (Laughs.) I’m gonna assume that Karen’s probably my partner and my lady.

You’re also featured in the upcoming FX docu-feature Hysterical. Can you talk a bit about your involvement and what it seeks to examine about you and other queer women comedians? It was spearheaded by Jessica Kirson, who’s a very hilarious, respected comedian out of New York, who is also gay. She and the producers just picked what women they wanted to highlight, and we were lucky enough to be included and just share experiences about being a woman in comedy and what that means. They filmed us each at our house and then a little bit on stage. It’s definitely not easy being a woman in comedy. And so, it just sort of highlights our journey.

Before you go, I want to wish you congratulations on your Netflix special, Sweet and Salty, which received a Critics’ Choice nomination. Oh, thank you. Appreciate it. Yeah, it was my first hour special. I had done a half hour with Netflix, and this was a big jump for me to get to do an hour. I was so ready for it. I was working this material a ton. I was really proud of it. And to get to share my story and my journey about coming out and figuring out who I was, and being representation for people and having it be on this worldwide platform, where people who might live in places where they don’t know a lot of gay people or they don’t see themselves in another person — it was really special to me to be able to do that and make people laugh at the same time.

I got so much love from it, and it was incredible, but I didn’t know if the industry was paying attention at all. That they are watching and that they saw something in it was really special, just really made me feel, finally, after all these years of being out in LA and putting in this work, that people noticed, and it meant a lot to me. And now I’ve got to work toward the next one.