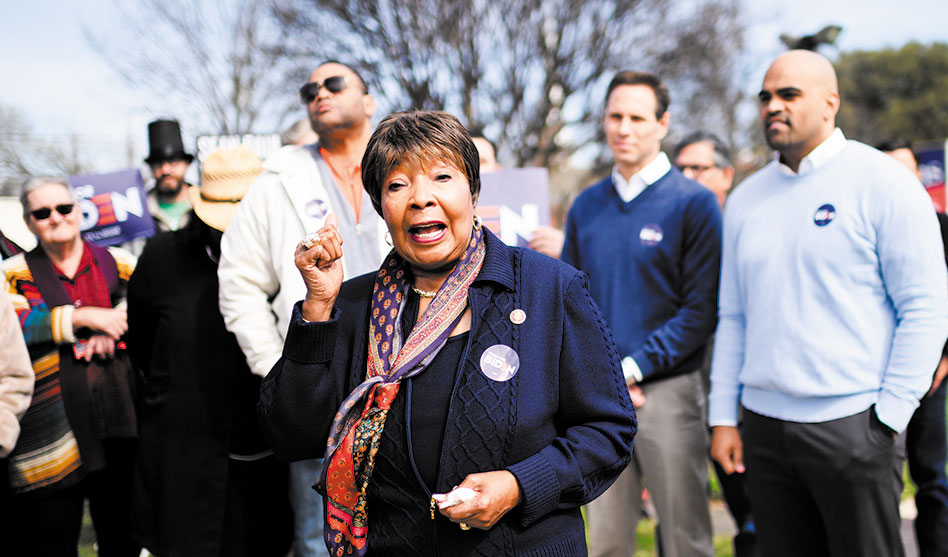 When Rep. Eddie Bernice Johnson called this week to talk about state Senate Bill 7, proposed legislation dealing with voting in Texas, she warned that it would allow “legitimized voter intimidation,” adding that she is afraid of what might happen if it passes.

“Chip, chip, chip away at voter rights til our democracy is gone,” she warned.

SB 7, which passed the state Senate and has been sent to the House, would do several things if passed. Among those things is limiting voting hours, outlawing drive-through voting and giving power to partisan poll watchers, especially over those requiring assistance at the polls.

Originally, the bill would have limited voting hours to 7 a.m. to 7 p.m. In the last election, Harris County extended hours to 10 p.m., mostly to accommodate shift workers. In the final bill, hours would be limited to 6 a.m. to 9 p.m.

Johnson pointed out that minorities make up a big chunk of shift workers, and, she said, the goal of the bill is to limit their chances of voting. The rule, she noted, has always been that if you’re in line by 7 p.m., you get to vote no matter how long the line is.

“Now, they want to make sure you can’t vote,” Johnson said.

It’s unclear if poll workers would be required to send away people who arrived and were in line by 7 p.m. but had not been able to vote by 7 p.m. because of long lines.

Drive-through voting, designed to make it easier for older and disabled citizens to vote, was greatly expanded last year because of the coronavirus pandemic.

With drive-through voting, a poll worker checks to make sure the person is registered before bringing a portable voting machine to the car. The voter then casts their ballot, and the poll worker takes that ballot inside to finish the process and returns to the car with a receipt that shows how the person voted.

SB 7 would allow a poll watcher to see how the disabled person voted and potentially interfere with the vote.
Johnson called it giving “poll watchers the right to intimidate and allow them to see how people are voting.” She recalled her own early activism where she went to the polls to pay the poll tax for people who couldn’t afford it. That now-illegal tax was designed to keep Blacks from voting.

Other proposals to suppress the vote are still floating around the Legislature. Among them, Johnson said, are efforts aimed at prohibiting voting mega centers. She said minority groups are most likely to have transportation issues, and the voting mega centers are more likely to be more accessible by public transport. Dallas County’s mega center was the American Airlines Center, centrally located and sitting right at a DART rail station.

One element of Georgia’s notorious new voter law prevents anyone from giving water to voters waiting in line. That wasn’t a problem at the American Airlines Center. Although thousands of people voted at the mega center, there were a lot of check-in stations for a long bank of voting machines. Using a large facility like that also allowed one-way flow of people, which was safer during a pandemic.

One get-out-the-vote technique that worked last November was what Johnson called getting “Souls to the Polls.” After attending church on Sunday, buses ferried people to an early voting location. That solved a transportation problem for some voters as well as a time problem. “Church buses took people to the polls while they were already out for the day,” Johnson said.
Johnson noted that among some Blacks, there’s still a fear that their employer might find out how they voted, putting them in danger of losing that job.

She recalled days when employers threatened their employees to vote one way or another, adding that over the years, she has had to make many assurances that a person’s vote was private.

Moves by Republicans to restrict voting across the country come after last November’s election which saw record turnout that, on a federal level, put the White House, the House and the Senate in Democratic hands, followed by claims from Donald Trump — echoed by Republicans down the line, including Texas’ own Sen. Ted Cruz — of widespread voter fraud. Those claims were proven false in every court that considered, up to and including the U.S. Supreme Court, and no valid evidence has yet to be presented.

And yet, the GOP continues to try and perpetuate the fraud with voter suppression laws. Just as many were finally accessing their right to vote, Republicans are trying to take those rights away. And that cannot be allowed, she said.

“Voting is essential to democracy,” Johnson said. “We have crossed the Pettis Bridge.”

OTHER ISSUES
Johnson, who chairs the House Committee on Science, Space and Technology, floated some ideas about protecting the Texas electric grid, and the House passed a bill on weatherization. She said Texas Sen. John Cornyn contacted her about working with her on a nonpartisan bill to fix the grid, which they were set to jointly announce on Thursday, April 9.

“The POWER ON Act aims to prevent a future severe storm, like the one Texas saw in February, from crippling our electrical grid and leaving countless

Texans without electricity for days on end,” Johnson’s office wrote in a press release. “It will assist Texas power providers, distributors, and suppliers with funding to winterize their facilities and infrastructure to prepare for future extreme weather events.”

Also on Tuesday, Johnson noted the death of her colleague Florida Democrat Alcee Hastings earlier that day. “He was a classmate of mine,” she said.
By classmate, she explained, she meant they were both first elected to Congress in 1992, the year the Congressional Black Caucus doubled in size. In 1994, gerrymandering districts went full force and was the first time Democrats lost control of the House of Representatives in 43 years.
Hastings died of pancreatic cancer.

“I checked on him often,” Johnson said sadly. “He put up a royal fight. He had a brilliant legal mind and was very likable. He was a good, fun buddy.”
On another colleague, Matt Gaetz, who is under investigation for sex trafficking, she said, “I don’t see how he can stay in office.” But she cautioned for patience. “It’s a long, slow process to guarantee fairness.”

Finally, Johnson shared her thoughts on the 2022 governor’s race in Texas: “Abbott will run until he thinks he can win the presidency,” she said.
Johnson said any Democrat will have trouble with name recognition because no one in the party has held statewide office since the early 1990s. But she said she hopes Beto O’Rourke throws his hat in the ring, because he’s done such good work with voter registration and participation and is probably the best known Democrat in the state. And she said she hopes he jumps into the race soon for fundraising purposes.