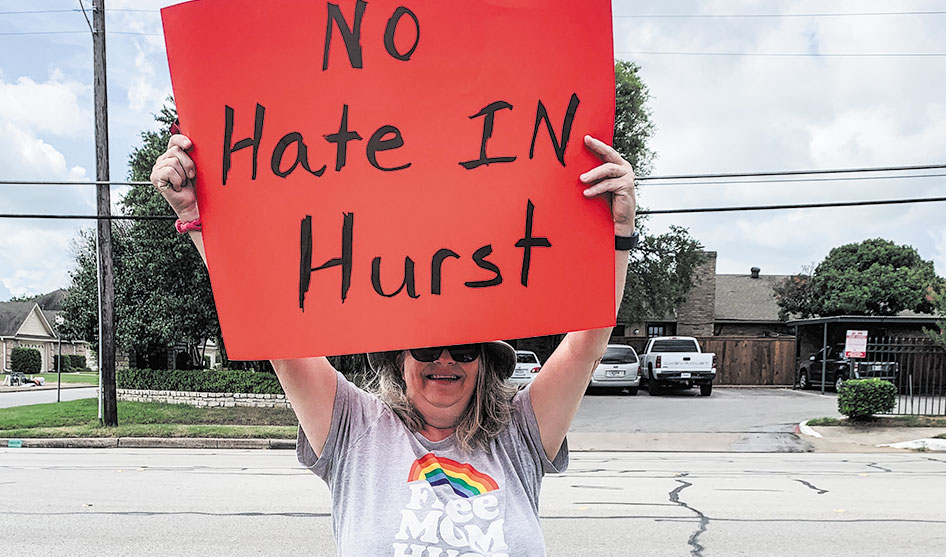 Teri Pate, cofounder of No Hate in Hurst. (Photo courtesy of Teri Pate)

No Hate in Hurst using rainbow sidewalks, silent protest and ‘a loving mindset’ to rid their city of Stedfast Baptist

It was June 2016, shortly after the mass shooting at the Pulse nightclub in Orlando, when a group staged a protest one Sunday morning outside the Stedfast Baptist Church in Sansom Park, a tiny enclave on the northwest edge of Fort Worth. The protest was prompted by a video posted to YouTube by Stedfast’s pastor, Donnie Romero, in which he preached that the victims at Pulse deserved to die because they were LGBTQ. Three years later, in January 2019, Romero resigned as pastor of Stedfast after being caught sleeping with prostitutes, gambling and in possession of marijuana.

Fast-forward two years and Stedfast has a new location in Hurst and a new pastor, Jonathan Shelley. But the hate remains. And after a video of Shelley saying during a sermon that LGBTQ people should be shot in the head began making the rounds on social media, protests have begun again.

This week, No Hate in Hurst’s cofounder, Teri Pate, talked to Dallas Voice about how the group started and why.

Dallas Voice: Did you start the No Hate in Hurst group? Who helped with getting it started, and why did you feel called to do this? Teri Pate: Yes I did — me and Kevin Day, Kim Trussell and her wife, Dawn Summers. There was quite a big outrage that [Stedfast Baptist was] in our own backyard. So, I suggested one 30-minute sidewalk stance. I spoke to the police, and we didn’t need a permit so it was on. I had three people join me at my house to make posters, and we had about 45 people the first morning.
In the middle of that first one Kevin, Kim, Dawn and some others said we had to come back. We went back that evening and there were 20 people that met us. And thus began our movement. 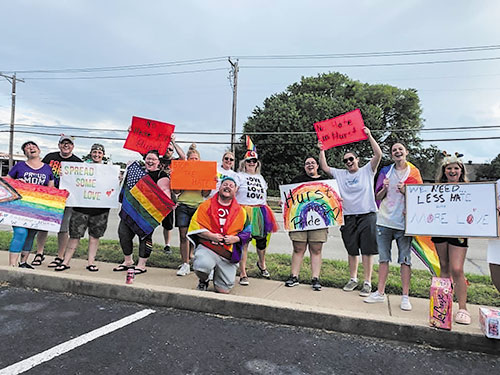 How did you first hear about Stedfast Church? I first saw them on our community Facebook page. I was appalled at what he said and even more so that he was saying such things in my city.

How often does No Hate in Hurst protest outside of Stedfast Church? We protest every Sunday at 10 a.m. and again at 5 p.m. and Wednesdays starting at 6:30 p.m.

Your group focuses on peaceful protest, right? Tell me what the group does. You have signs, I know. Are there chants? Singing? We have encouraged our protestors to stay on the sidewalk, hold up signs towards the passing cars and not to verbally engage with the cult members. At first, we were yelling things like ‘Have a nice day,’ ‘We like your dress,’ ‘Drive safe.’ Unfortunately, that allowed some protestors to yell obscenities and hateful things.

We now encourage a silent protest. We are a new group and have had some heated discussions about what our protest should look like. The four of us have decided to stand by our belief that citizens can have a peaceful protest and still facilitate real change within a community.

Tell me about decorating the sidewalk outside the church. We had a woman hear about us and drive in from Arkansas. She is retired and travels the country protesting different things. The way I remember it is the sidewalk rainbows were her idea. It began with a rainbow flag drawn onto the public sidewalk, in front of the church, with regular chalk. The next morning the cult was out there power-washing it off. Every night since, the sidewalk mysteriously gains a bigger and bigger rainbow. And every morning, the cult comes out and washes it off with their power washer. 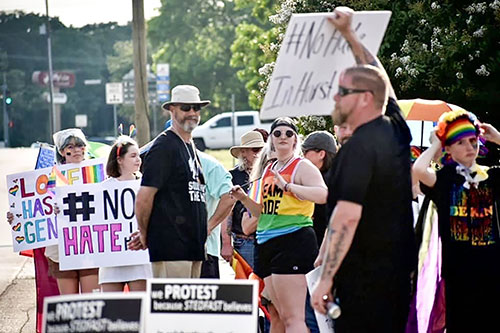 The rainbows have even been made out of modge podge and environmentally friendly glitter chalk.

The preacher at this church has basically called on his followers to kill gay people, and it is my understanding that he is known, as are other members, for carrying guns. Are you afraid? Do you worry that someone from the church might respond with violence, and if they do, have you and your group developed a plan for that? I am worried about the amount of fire power the members seem to have. That is why we have encouraged our members to come with only a loving mindset and have tried very hard to not give them any reason to justify their murderous hatred of so many people.

What kind of response have you gotten from church members? Has anything happened that makes you feel like you are getting through to any of them? Our intention was never to get through to church members. Our intent was to show the rest of the world that they do not represent Hurst, Texas. 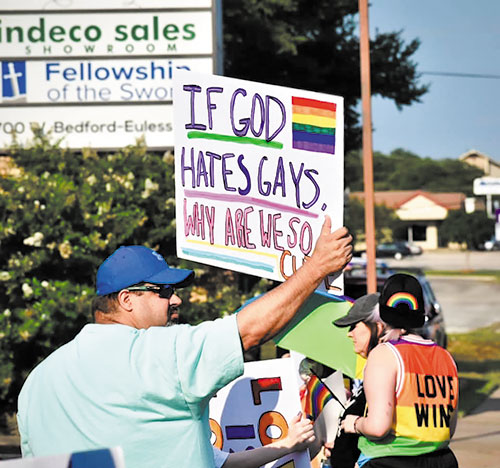 Our peaceful ways were working; they were getting nasty phone calls every few minutes, according to Brother Dillon in a sermon he gave last week. The attendance appears to have dropped. One woman, last Sunday, spoke to some protestors and then turned her car away and left.

The public is looking into them and not happy that this is in their backyard. We are accomplishing what we set out to do, make the public aware and remove them from the DFW area.

What about other residents in the area? How are they responding? Do you feel supported by them? We have had one set of hecklers. Everyone else honks, stops to give us water, stops to hold up a sign, our protest grows every time. We had over 100 this past weekend. My Facebook group, NO HATE IN HURST, was started on June 29 of this year and now has almost 900 members. Most people are tired of the hate and are hopeful when they read about what we are trying to accomplish. Most people support ONLY peaceful protests. It has been heartwarming after the past two years to see people choose love over hate.

Your group has gotten a good response from Hurst police, yes? Tell me about how No Hate is working with police to stay safe and make sure you stay within the law as you protest. I contacted them before our first stand-in to see what my legal rights are, as I am a community activist virgin, and I have been in contact with them throughout this entire experience. My belief is that police and citizens can actually work together to facilitate peaceful change within a community. Kim Trussell, one of our group administrators, is working closely with them to maintain as peaceful a stand-in as we are able to have.

What is your ultimate goal for these protests? What will you consider to be a victory? And how long are you prepared to keep going? Our ultimate goal is to get them out of DFW and see their church abolished throughout the country. We will consider it a victory when they are gone from DFW.

I have no idea how long this will go; we are prepared to go as long as it takes. I originally only wanted to do this for 30 minutes, but then I suddenly became an accidental activist. None of this was on my radar when this thought first manifested, but I’m excited to see how many people are like-minded. It’s renewed my faith in humanity.

If someone wants to join No Hate, what do they need to know? What are the rules for participating? We have information on our Facebook page and rules are posted. Basically, anyone with a loving mindset is welcome to come out or join our group. We stay on the sidewalk at all times and do not engage the cult members in any way.

What else do you want to mention that I haven’t asked about? Our ULTIMATE goal is to convert their current space into an LGBTQ+ resource center.