Frank Farinaro talks about his work as a student, performer and teacher of belly dance

Frank Farinaro gets his audience’s attention from the minute he dances his way onto the stage. The first thing to catch your eye may be his costuming: “harem”-style pants in muted but luxurious colors, a scarf tied around his head and a multitude of bracelets and anklets and necklaces and medallions and belts and maybe even a brightly-colored hip scarf.

Or maybe the first things you notice is his height, his long arms and legs. Or maybe his dark eyes and intense stare. 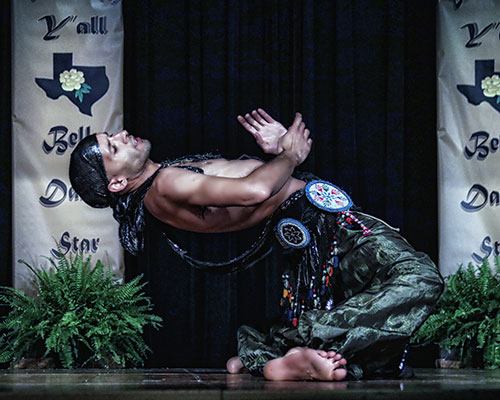 But no matter what you notice first, it is his dance that will stay with you long after Frank himself has left the stage — the way he spins and shimmies, the way he can contort his long, lean body into backbends deep enough that he touches the floor before spring back up, and the way he stretches out to fill the whole stage. And most of all, it’s the joy and the energy in his dance — so much of that that it can’t help but spill over, off the stage and across the audience, making you want to get up and dance, too.

Over the last 15 months, since the murder of George Floyd in Minneapolis, Frank has shared publicly another side of himself as well, speaking of his experiences as the biracial son of a white mother who worked as a police officer.

As he prepared to head to the DFW Metroplex from his home in Colorado to once again teach and perform at the 20th anniversary Yaa Halla, Y’all, a weekend of belly dance workshop and shows, in Grapevine, Frank took a few moments to sit down and answer a few questions for Dallas Voice. 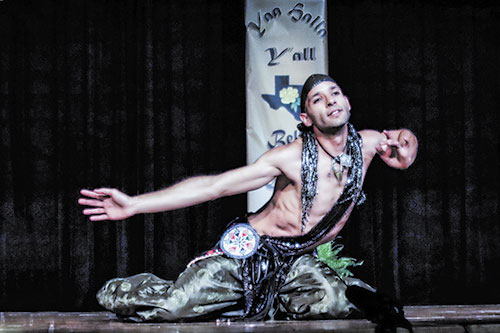 Dallas Voice: Tell me some basics about you: Where do you live? Where do you work? Tell me about your partner. Frank Farinaro: I live in the Denver area, between the foothills of the mountains and the downtown skyline. I have two of the best jobs ever, and I have no idea how I got so lucky. When I am not teaching or performing ethnic dance, I manage a culinary herb and spice shop, where I spend my days talking about ethnic food!

My partner Brian and I have been together for nine years. He is also a dancer as well as a cosmetologist.

How long have you been involved in belly dance, and how did you get started? Do you have a background in other kinds of dance? What was it about belly dancing that caught your attention and made you want to be a dancer? I have been involved with belly dance for more than 21 years. Belly dance first caught my eye when I first saw Veena and Neena [twin sisters Neena and Veena Bidasha, well-known belly dancers] on television, in the 1990s. I started studying folkloric foundations of belly dance with my first instructor, Donna Mejia, in my college years.
As a student of dance, I have run the gambit from folkloric to technical to social. Belly dance was just the first style of dance that I encountered that fused elements of other ethnically-specific dances. I did not know that there was an entire dance world to enjoy, until Donna showed me the way. 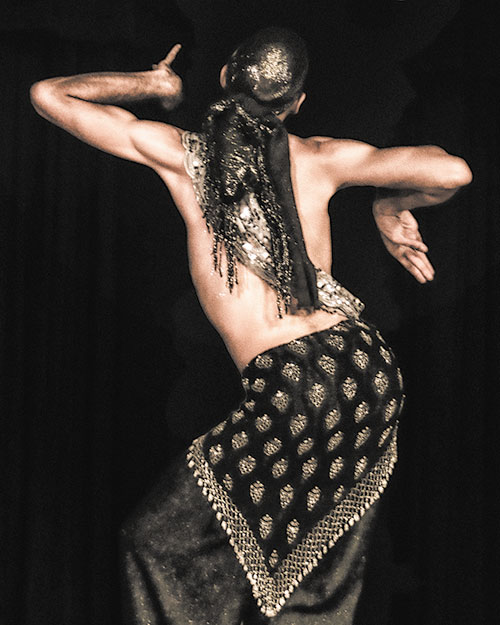 You have talked about studying the cultural roots of belly dance/Middle Eastern Dance. Why is that important to you? How do you honor that culture and history without crossing the line into cultural appropriation? Growing up with a multicultural background, I enjoyed learning about the cultures of my family as much as learning about others. My favorite learning experiences are ones that involve music and food. Those two things are windows to the languages, lands and histories of other cultures. Through learning the histories of one culture, you can learn how that culture began to interact with others in past and modern contexts.

I think a healthy balance of doing just as much academic study as technical practice is a key element in avoiding cultural appropriation. The same way a dancer may enjoy learning any style of Egyptian dance in a class/workshop setting, they could learn just as beneficial a lesson by enjoying a documentary or book about Egyptian culture, history, music, dance, etc.

I have learned to avoid cultural appropriation by combining shared subjects of cultures that have a positive history of interaction and by avoiding subjects/themes [where] cultures either have a negative or no history of exchange.

The fact that we live in an era where we can have international song lyrics translated for us quickly is also a huge benefit that I wish more people would take advantage of. Most importantly, it is unethical to treat the cultures of other people with the same frivolity that a painter does when mixing colors or a tailor when mixing fabrics. 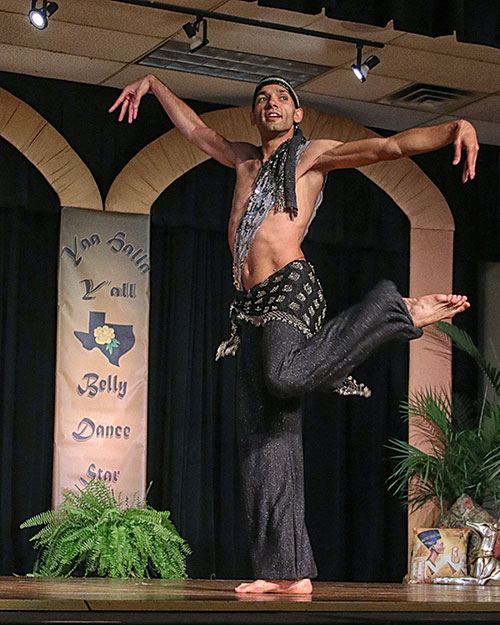 Talk about the different styles of belly dance, not just “cabaret” vs. “tribal” vs. “fusion,” but the different sub-styles within those styles and, of course, the distinctions among the kind of modern belly dance we are used to here in the U.S. vs. modern belly dance in the Middle East vs. the more “traditional” styles. Shaabi is an Egyptian style of folk dance that has/does lend itself to belly dance as we know it today. There is the “old world” iteration, with dancers wearing long dresses and hip sashes dancing to hand-played instruments. The “new world” iteration has dancers in shorter, ruffled dresses dancing to orchestrated or even popular music.

In modern times, Mahraganat or “Street Shaabi” has become the most recent (and most political) form.

Dabke style dance, from the Mediterranean, has had much the same journey. Its most recent evolution is called “Shamstep.” I am excited to be bringing it to Yaa Halla, Y’all this year!

Talk a bit about being a male belly dancer. Most people not in the belly dance world — as well as some who are — think this art form is just for “women.” Was it difficult to find a studio/teacher willing to take on a male student? Are you seeing more men in belly dance now than when you started? And what about men who perform a more cabaret style compared to men in fusion styles of belly dance? Being a male belly dancer was, by far, the craziest journey I have ever experienced. Finding space to learn, grow and share was difficult in the beginning. I was so grateful that Donna introduced me to the belly dance festival circuit. It was there that I was able to take advantage of learning opportunities that my hometown could not provide me.

Along the way, I have been able to find my community. I have noticed the numbers of male belly dancers tends to fluctuate through the years, but they seem to be evenly split between styles. More male dancers are starting to perform in more folkloric specific styles, which is beautiful to me!

Tell me about your experience being openly-LGBTQ in the U.S. belly dance world? Did you ever feel uncomfortable being open as a gay man in belly dance? What is your perception of the belly dance community overall in terms of being welcoming and supportive of LGBTQ people? If you feel the community is welcoming and supportive, moreso than U.S. society in general, why do you think that is? If a man does ANY style of dance in the U.S., it is generally assumed that he is gay. Me being out has allowed women to feel more comfortable and less threatened by my outward appearance.

The time I was the most worried about being out in the scene was when I went to work at a festival in Russia. Luckily, it was just a great experience.

The belly dance community is quite supportive of the LGBTQIA community. I feel that they are so inclusive because studying belly dance involves making space for all different ages and bodies.

Especially over the last year-plus since the murder of George Floyd and the protests that have followed, you have spoken openly about being biracial and about having grown up with your white mother who was a police officer.

Your background, I would think, gives you a unique perspective. Do you mind talking a little bit about that? Existing as black and white at the same time is a challenge when white and black folks have a difficult time agreeing how the other exists. That story is a common narrative for the many biracial people like me. Growing up having a white cop as a mother gave me a unique insight as to how the police profile people, and what they can get away with in court.

When it comes to support for these issues, the options are limited on both sides. Being a minority within a minority does not afford much empathy, especially when seeking understanding from people who want to interpret your culture and deny your reality in their own way.

What do you want people not familiar with belly dance to know about belly dance as an art form and as a community? Whether you happen to see a live performance at a restaurant or dive into taking classes, belly dance will open your eyes to parts of the world that are as old as mankind and still relevant today. It may also connect you to some of your cultural roots.

Belly dance helped set the path to help me learn about my West African, South Mediterranean and American roots.

Last but not least, what have I not asked you about that you want to talk about? One of the best things about belly dance and Middle Eastern Folk dance is that it is made to dance with your body, for as long as you inhabit your body. That is a powerful thing!

Workshops for dancers, featuring internationally known teachers, including Frank Farinaro, will be held each day at the Grapevine Convention Center.

Competitions and shows, featuring some of the best belly dancers in the world, will be held each night at The Palace Theater in downtown Grapevine.

The Palace will be open each day at noon for people to shop at vendor booths offering attire, jewelry, music and more.

Visit Facebook.com/YaaHallaYall for more information on shows, performers and tickets.